Last Of The Can’t Drive Club 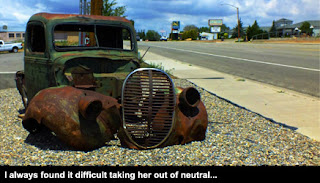 About 6 years ago I made a concerted effort to learn how to drive. I got to the point where, accompanied by an instructor, I could drive on a motorway. And then my youngest boy appeared and I decided to finally get round to completing my part time University degree… and the money wasn’t there to support £120+ a month for driving lessons. I “temporarily” gave them up.

It was probably a bad decision. Especially as I was so close to qualifying for my test. And let’s face it, I think deep down inside part of me knew that this cessation in acquiring this particular skill was anything but temporarily.

Driving never seemed natural. Not to me. I always felt I was breaking some secret rule, some hidden druidic law concealed at the very heart of my own personal universe. I was never meant to drive.

I never felt the burning desire like most of my peers did in my late teens. Never felt the lure of having my own set of wheels in my twenties. And just wasn’t career minded enough in my thirties to see how being able to transport myself beyond the walkable limits of Leamington Spa might aid me in my desperate search to find a more soul satisfying line of employment.

I gulled myself that I wasn’t the only one. I had numerous male friends who couldn’t drive, hadn’t learnt and exhibited utterly no desire to do so. One of those, Dave, has been my mate since I was 16. I always felt we were destined to walk the earth, to quote Samuel L. Jackson in Pulp Fiction, “like Cain”. With occasional reference made to a bicycle. I haven’t had regular contact with Dave for a few years now but I knew he and I were upholding the virtues of “Shanks’s Pony”.

I even kidded myself that all this was ecologically responsible. The last thing the world needs is another driver and another car on the road, right?

Not learning how to drive sat comfortably with me. It was me; it was who I was and I was content.

I learnt last week that Dave, sometime over the last few years, has not only learnt to drive but also owns a car. He’s made a couple of references to it on Facebook. I was so ingrained in how I thought of us two that I actually thought he was joking the first time. That it was a wind-up.

He really does own a people carrier and can drive the ruddy thing. Up and down the country and even across to Europe if he goes via the Eurotunnel.

I am the last member of the Can’t Drive Club. The schism that life has thrown up between Dave and I is worse than I ever imagined. He’s now a motorist and I’m just a pedestrian.

I haven’t felt this bad since all my school mates got picked to be prefects and I didn’t.

The world is leaving me behind.

Quite literally in fact.

With the wind behind me, going downhill on a good day, I might be able to reach 15 miles an hour… but that really is my top limit.

Your friend Dave is behaving like a boy with a new toy. Cool people know how to drive but minimise the time they spend in a car. Not knowing how to drive befits beardy author types like you and Tolstoy. Tolstoy could afford a chauffeur, of course.

John: thank you. Not sure if that makes me feel better or just confused.

Gorilla Bananas: now a chauffeur I could aspire to.

I hated learning to drive. As much as a horse feels natural to me, the tin box was an anathema. My parents had a driving instructor show up at our house every Sunday afternoon. In hindsight, he was very good. He was always educating me about some aspect of the Highway Code, which didn't stop me from wanting to pull over and hide in a ditch, every time I saw another vehicle heading our way.
I did not pass my test the first try. I think I made a second attempt with my employers' Landrover, in Epping. That thing was rough, but the freedom it enabled has never left me.
Go for it, you big girls' blouse. What if there's an emergency one day and you have to wring your hands and refuse to take the wheel? With all the idiots, morons and dingbats on the road, you are missing an opportunity to shine.
I now love reversing accurately into a parking place. You're missing some fun!

Count me in the no drive club. As my dad said once when trying to teach me "you have the coordination of a pineapple" LOL

English Rider: that does worry me, I must admit - the emergency situation when we need another driver. There have been a couple and we've been fortunate to have very helpful neighbours... but one day they're going to be out...

I would suggest you take the lessons, pass the test, become road worthy, and then don't drive. Then it becomes a life choice statement rather than a legally imposed restriction.

My first driving lesson, with my dad, ended up with me driving through the neighbour's garden wall. It put me off for a few years but then I put it behind me and got cracking again. I don't particularly enjoy driving but I am glad I can. I think you should give it another go.

Trish: so do I at heart... The problem is finding the tin.

Own up your a total tosser. Proper men drive; Clarkeson, the Hamster and the one with the huge belly and long neglected hair.

Car driving means you can scratch your balls and double de-clutch at the same time. It means having your offside window down and blasting tasteless shit onto the pavement.

It means you can go to China and India and sell useless 4x4 off roaders to muts who drive up and down their 3 mile drive ways.

No. Don't answer that.