The Axis Of Guilt 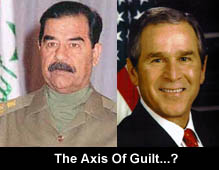 With miraculous good timing Saddam Hussein is sentenced to death by hanging a couple of days before the US mid-term elections. What a lucky man George W Bush is. Vindication right when he needs it.

While Saddam Hussein has undoubtedly committed the grossest atrocities against humanity and deserves to be brought to account it’s difficult not to react with some cynicism to the way this trial has been conducted. The whole thing has been a circus at best and a fully choreographed farce at worst.

The sentence of course has always been a foregone conclusion. Guilty. And nobody would argue against it.

But if we’re going to start dolling out righteous punishments for those who commit "crimes against humanity" then we need to be more even-handed and wider ranging in terms of where and on whom we set our sights.

All of them politicians. Some of them "world leaders".
Posted by Steve at Sunday, November 05, 2006
Email ThisBlogThis!Share to TwitterShare to FacebookShare to Pinterest
Labels: America, GeorgeWBush, Iraq, SaddamHussein, USA