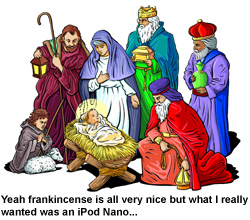 Karen and I went to see Ben in his school play yesterday afternoon armed like every other parent there with camera/video recorder/Dictaphone/iPod/mobile phone and every other piece of hi-tech gadgetry ever invented.

There were so many lenses and LEDs flying about the place that Steven Spielburg would have creamed his little furry boxers.

We took Tom along with us though he took little interest in the performance, preferring to sleep snuggled up in his car seat on the floor at our feet. Call it charisma, call it charm, call it innate acting ability but Tom’s afternoon nap commanded a fair bit of the audience’s attention... at least in the part where we were sitting.

The school play however was squeakily superb. Lots of cute lines delivered with volume and enthusiasm (but no feeling or understanding) and I’m proud to say that Ben’s delivery was the loudest of all. He was playing a transformer toy newly delivered by the tiniest Father Christmas I’ve ever seen and though he had but one line he gave it his all. Full lung capacity.

I’m not joking - I saw the first two rows of the audience visibly recoil and the stage shudder slightly as the air above it was warped by the sound waves. The headmaster was seen to exit the hall with blood pouring from his ears. Even Tom stirred a little in his sleep.

A star is born. The roof had been raised (literally – three cracked rafters and 17 missing slates, last seen flying towards Birmingham on a supersonic jet stream).

Mark my words; it’ll be RADA when he’s older.

Either that or a job as a town crier.
Posted by Steve at Wednesday, December 19, 2007
Email ThisBlogThis!Share to TwitterShare to FacebookShare to Pinterest
Labels: baby, children, Christmas, Karen, school

at least he was heard! i like that in a young person...not afraid to hear his own voice and to belt it out to others...GO BEN!!!

A chip off the old block in some respects methinks!

Tho' better his talents lie in the acting direction rather than writing to avoid the inevitable turf war when he's older!

Have a good one Steve & Mrs Bloggertropolis GTi! x

Hi Daisy, if there's one thing Ben is not afraid of it's the sound of his own voice. Both Karen and I can vouch for that. And sometimes before 6.0 in the morning...!

Thanks Laura, wishing the same for you and yours. As for turf wars... I'm of the opinion that there's always room for more writers in the world... ;-)

haha yeah my son was the loudest too. I reckon it's just because they're used to having to shout to be heard at home.

Last year he had but one line "I bring Frankincense for the baby" and his brothers spent the whole of the two weeks before the play trying to get him to say "Frankenstein" instead. I had to have a couple of G&Ts before the performance as I was panicking that he might succumb. But he did not.

Merry Christmas, Steve! Hope you get plenty of lego!!

Oh, that sounds wonderful. School plays have come a long way since we played shepherds with an old tea-towel on our heads.

Hi RB, in all honesty Karen and I are wondering if Ben has a slight hearing problem as he is consistently loud and also frequently mishears things... of course he could just be a human foghorn and we'll have to lump it!

Nora, I have to say the kids costumes were pretty amazing. Not a tea towel in sight. Though there was a profusion of tinsel and bedsheets.

Oh Steve, you enjoy these years! It's such a fantastic feeling when your heart bursts with pride at the achievements of your children. Ben deserves another chocolate from the tree methinks :-)

Ps. I like the caption with your picture BTW!

Thanks Annie, Karen and I both aim too - we've got loads of footage of the play so we can re-watch it again and again. With the volume eased down a bit naturally...!

> Tom’s afternoon nap commanded a fair bit of the audience’s attention... at least in the part where we were sitting.
Mmmmmmm..... sleeping Tom must have looked so good :-)

Well, that is very weird what you say about his hearing, because I thought exactly the same about Joe and took him to a specialist (about two years ago) where they tested him with some special machine that bounces soundwaves about (can't think what it was called) - but his hearing was fine. He too misheard things (although thinking back he could always hear the word "biscuit" from about two miles away!) and his speech was very slow to develop in comparison with my other three children.

Maybe you should have him checked out?

Hi RB, yes... Ben's hearing remarkably allows him to hear the words "chocolate" or "pudding" from at least 100 yards away yet phrases like "clean your room" seem to pass him by completely... hmm! I think come New Year we will get him tested properly just to make sure all is ok...

Steve
You seem to have a mini Brian blessed on your hands (+:

Ha ha! Hitch, I hope we have a few more years before the beard starts growing...!

I actually do enjoy school plays, we don't get into the Christmas stuff here at schools tho' not sure why but no doubt so we don't offend those who don't celebrate Christmas! To hell with our own traditions eh?! Anyway, sounds like you better start saving things with Ben's signature....

Amanda, I already have signed photographs available on request... and am collecting his toenail clippings in a jar.

Hooray! Nothing like going to see your young 'uns in the school play! Not that I've ever done that, but...

Any photos of the Boy in performance?

Hi OC, Karen managed to shoot a little bit of film. Once we've edited it together I might try and post it on-line...!

Well it's Xmas Eve now so I'm sure your young ones are getting very excited about it all! Have a great Xmas, Steve.

You too, Simon, you too - hope you and Gustavo have a wonderful time!