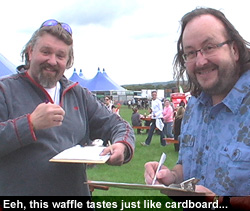 Apart from Gary Rhodes TV chefs don’t as a rule annoy me.

Mainly because I find there’s something pleasantly soporific about watching someone cook. I guess it harkens back to the days when, as a boy, I’d watch my gran makes cakes and pies in her 1970’s deluxe kitchen. Even now, watching a Victoria sponge being lightly dusted with icing sugar just puts me in a good mood for the entire day and relaxes me into a state of goodwill to all men.

So a TV chef has to go a long way then to fully upset my apple cart.

Cue Simon King and David Myers, the two halves of which don’t quite comprise a whole in the shape of the BBC’s Hairy Bikers.

I’m gritting my teeth at the mere thought of them.

Their shtick seems to be that they’re hairy. They ride bikes. They’re Geordies. And they cook.

Inscrutably, Karen likes them (hence this is how they find their way onto my HD-unready telly). And on the face of it they’re inoffensive enough. But for some unspecifiable reason they irritate the colon out of me.

They are essentially The Chuckle Brothers with beards and bikes. A male version of the Two Fat Ladies (and let’s face it, Clarissa Dickson Wright and Jennifer Paterson were practically bearded anyway).

They’re cooking isn’t particularly stunning in my opinion. It’s all a bit... pedestrian (which is very ironic given that they spend most of their time with their be-leathered thighs wrapped around the throbbing engines of their gleaming hogs).

It’s all a bit “blokey” and “roadie” and not expertly enough “chefy”.

But maybe that’s the point? Maybe they’re trying to get more blokey blokes to cook? An admirable campaign if ever there was one but there’s something ineffably flat and wishy-washy about the pair of them. And yes that is a deliberate pantomime reference. The pair of them could don dresses and it wouldn’t look at all weird. Unattractive. But not weird.

Hmm. I don’t know about you but I’ve never seen the Hairy Bikers and the Two Fat Ladies in the same room together at the same time... though of course Jennifer Paterson’s death in 1998 shoots a rather large hairy hole in that theory.

I guess my biggest complaint about the hairy bikers is quite simply... the hair. Their jaw-lines and top lips are just too hirsute to make their food at all palatable. And this is from someone who is himself bearded. It’s very off-putting to watch them sinking their molars into a double crust yak and leek pastie and then try and sing it’s praises to the camera as flakes and shards of pastry and meat hang loosely in their beards and moustaches like miniature trapeze artists trying to escape from a Russian circus.

The inside of their helmets must look and taste like a Subway deli counter.

lol steve...i have never seen them...i don't go much for cooking shows anymore...they tend to make things which look great on tv but usually have too much spice or something added where you can no longer taste the food itself...if i have a steak i want good beef and to taste the meat...if i am cooking italian food...i want to taste the pasta...and the sauce properly without too much spice added...call me simple but i like to cook and eat that way...and you should taste my apple pie...mmmmm

...umm...there was no double entendre meant by my statement either...i was really talking about food...:)

Ha ha! Daisy, you actually added your second comment before I could respond with raised eyebrow to the first! Took the thought right out of my mouth, cleaned it up and threw it right back at me! ;-) I'm not a fan of fruity deserts I must admit - but anything with chocolate of coffee is usually a surefire hit with me! But I'd be happy to give your apple pie a good munching (no double entendre intended yet again) if you recommend it so highly. As for the way you like your food I couldn't agree more - we rarely use spices or salt in my house preferring to taste the actual flavour of the food itself. You really can't beat it. You'll also be pleased to hear that I also keep my beard and moustache neatly trimmed to avoid snaring food in my follicles like wayward dolphins caught in tuna fishing nets...

I too don't really 'get' the hairy bikers, and I'm a biker!
They don't cook particularly well, they're not particularly funny, so what gives?

You're probably right Inchy. If I actually cared about the food I'd be scribbling down the recipes like a man possessed... but the Hairy Bikers just don't have a hook as far as I'm concerned and as you've pointed out their culinary expertise is underwhelming.

ANd much as I like Gordon Ramsay I'd much rather watch / hear Nigella say 'fuck'...!

Steve, you're opening a whole other can of goose fat, and in the interests of cleanliness, let's not go there.

PS - Daisy, it worked for me too, sorry.

Cans of goose fat and apple pies...? My God, the Hairy Bikers have actually got us talking about food, albeit for its euphemistic properties. Who would ever have thought it?

I'll have a LARGE portion!

Me too. I've heard that Nigella does a terrific banana split... and her homemade baps are a great accompaniment to anybody's meat and two veg.

Shall we stop there or have you got room for some spotted dick?

I'm laughing too hard to comment constructively. But I do have this niggling feeling that they don't go together particularly well. As if at the auditions in the Bigg Market ('Hirsute bike-riding cooks sought') nobody turned up, and in despaertaion they signed up the sound man and someone who was unloading boxes from a white van.

Brother T, you've summed them up far more accurately and succinctly than I managed to achieve in my post...!

I haven't seen those guys show either and I guess I won't now, sounds too awful for words. Great description of food ahnging from the 'tash/beard! As the saying goes, I like to cook with wine...sometimes I even put it in the food.

Alas, I believe the hairy bikers cook with Special Brew...

Perhaps they are a diet programme in disguise Steve - ie the sight of them indelicately quaffing their indelicately produced joint of mutton and losing half of it in their beards (for later) actually puts you off food altogether - in case you wind up looking like them and hey presto, the weight drops off.

There is something in what you say, Laura. I find that I do indeed steer away from excessive tache growth and have never ridden a motorbike. Nor indeed have I ever spoken with a Geordie accent whilst cooking. And I'm rather trim and svelte. Hey - it's working!

Never seen the Hairy Bikers/Bakers show but it does sound a bit contrived! Are the BBC short of ideas, do you think?

Don't watch cookery shows, as a rule, but, if pushed, I'd admit to enjoying Keith Floyd's devil-may-care attitude when preparing his cuisine! That and the fact he's a Stranglers' fan!!

Weirdly enough, TimeWarden, I noticed two Stranglers' tracks used as backing music in the last episode of the Hairy Bikers current show... a cynical attempt to cash in on this association methinks!

I don't mind the geordie one, but the smaller more grinny one annoys the bejesus out of me. And in fact if you look closely you can sometimes see the geordie thinking the same.

PS Just finished a can of goose fat and am casting about desperately for a substitute - I make the finest roast potatoes in Christendom but only if I have the rendered lard of some unfortunate waterfowl to hand...

Lucy, I think you're right. You can see in the eyes of the big geordie one that he's constantly musing on ways he could poison his small sidekick without the finger of suspicion pointing at him afterwards... I wish him well in his endeavours.

As for the roast potatoes - that's a boast and a half. I'm prepared to be an impartial judge if you'll bring the roasties...