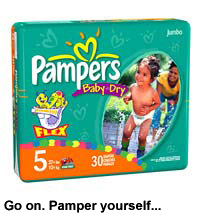 Tom is usually very ambivalent about having his nappy changed. He is at that age where he assuming ownership rights over his nappy and its contents. His objections to a “bum change” (as it is termed) are usually expressed in the single assertion: “Mine!” A gentle tussle will then ensue as the old nappy is wrested away from his nether regions and a fresh one applied.

This morning, however, he marched into the bedroom at “getting up time” (can’t fault him on that) and insisted: “Poo. Poo.” This, for those of you who don’t speak Toddler, means “There is a horrible poo clinging to my buttocks like a limpet, please remove it forthwith.”

The horrible brown stain on his romper suit warned us that all was not right in the nappy universe and we had better go to “condition red” immediately. Envisioning a nappy leakage of Chernobyl proportions I headed for the nappy supplies – clean nappy, nappy sacks, baby wipes, etc – conveniently stored in the boy’s bedroom only to find the entire room was covered in a blanket of snow.

Well. Not snow exactly. But the contents of two packets of baby wipes. They were everywhere. Moist, soft and ready to use. All four hundred of them. We’re guessing that Tom, feeling distinctly uncomfortable in his southern hemisphere, had decided to try a bit of self help and had possibly tried to clean his own bum through his romper suit and his jim-jams. It was always going to be Mission Impossible, bless him.

So grabbing a few wipes from the drifts around me I set about peeling Tom out of his clothes. It wasn’t pretty. In fact I probably reacted like a battlefield doctor when faced with something extraordinarily horrific. The humble instruments I had to hand were just not going to do the job.

There was only one thing for it. An emergency splish-splash-splosh (or “bath” as it is known in common parlance).

The boy was summarily dunked and sluiced. The unclean bandages of his jim-jams flung into the washing machine. The gravy-filled nappy bagged up and dropped into the bin destined for the nearest landfill.

All this took merely ten minutes. A fact which, quite frankly, amazes me. When faced with bad situations, I guess the mind goes into overdrive. Time seems to slow down. The body exhibits a dexterity that has the exactness of clockwork. The wife and I work together like the parts of a well oiled AK-47. No jamming, even in hot conditions.

Before Tom knew it he was clean, presentable, dressed and having a long toke on a tumbler of milk. He looked slightly dazed. Shocked even.

I’m glad to say he had fully recovered within 15 minutes. The paras could stand down.

I, on the other hand, have gone into delayed shock. Battle fatigue. Post traumatic stress disorder.

It’s the only reason I can come up with to explain why I just can’t face eating chocolate this morning.

This post had me laughing out loud. Oh Steve, if your book is not a success there is no justice. You write ever so well.

There is only occasion that I've had gross gagging moments with the two dogs. When we first got the rescue - Poppy - we didn't realise that, as she had almost been starved to death, she had an eating disorder.

One of the first times we went out leaving her and Misty alone I forgot I had left some sugar free sweets on the kitchen table. One of the things written on the packet is that 'taken in excess these sweets have laxative properties'.

Yes - you know what is coming - the piles of green and pink smelly foam that were left all over our rug and all over her were horrendous. How I would have wished for a doggy nappy then.

It could've been worse... a similar thing happened to a friend of mine - only with the sudocrem.

Try getting that out of a carpet!

FF: unfortunately my novel isn't a comedy... but the one I'm planning next is going to be a "funny"! I must admit dog poo is foul. Really, really foul. Kiddy poo is positively fragrant in comparison. Not that I'd want to use it in place of the Shake 'n' Vac.

Dotterel: ah, we're fans of Drapolene but I imagine the collateral damage would be the same...!

Me too, laughed my arse off, well some of it, seems like still quite a lot left. I remember the days of the explosive poo, up the spine and round the shoulder blades.
Sadly only myself to worry about now, can't laugh, sneeze or cough without making an on the spot decision to clench either front or back. Oh the circle of life, how maHvellous it is. ;)

I'm sooo happy I've got that all behind me. Changing nappies has always been my worst nightmare. I remember the first times I had to do it I felt totally sick. I've read somewhere that Madonna has never changed a nappy in her life. And who would blame her? Anyway, you seem totally organized and efficient. Well done. Ciao. A.

Missbehaving: without going into too much detail I believe my mother and my wife would probably sympathise. Thank God all my tubes and muscles are still remarkably buff.

Lunarossa: it's not the greatest job in the world but I do think it contributes quite a bit towards bonding (sometime literally) - Madonna is not only missing out she's making herself a coward. If you've never smeared your own kid's poo over your hands then you ain't a real parent!

ha ha ha, oh those lovely nappy explosions. But that is so sweet that he tried to clean it up himself!

Heather: despite the nefarious workings of his bottom he is a very clean boy.

No - I can't read this one Steve.
I'll wait for the next post.

I want to complain that you said you would only write about nice things this week (after your toenail and spider posts - yeuugh!) but I have to admit to laughing too much. Against my will, you understand !!!

Selina: I did, didn't I? Sorry. Sometimes life takes over...!

Well...that's it for the Milky Way I was trying to eat! Thanks ever so much, Steve!

Well...that's it for the Milky Way I was trying to eat! Thanks ever so much, Steve!

Eww! Thanks for that last sentence!!

I can remember such events vividly from when my two were small, explosive poo, lovely!

I can't tell if you are boasting or complaining...epic in either case.

Suburbia: I can see how such events would emblazon themselves indelibly onto the mind...

ArtSparker: ...most definitely epic. And with the sequel hitting us this morning. I suspect we might have a trilogy on our hands.

Now, on the one hand this made me laugh uncontrollably...presumably a bit like Tom's bowels...but on the other hand made me feel very grateful indeed that I don't have to indulge in this sort of activity anymore....

The worst Saw towers moment with daughter #1 was when she was a baby and did projectile diarrhoea with the nappy removed (in scheduled pit stop and with no previous hint of the condition) out of her bedroom door and over the banister....

Nota Bene: there is of course no cast iron guarantee that this condition cannot afflict the adult of the species...

Tenon_Saw: I guess I am now ruling out not only chocolate bars but also chocolate fountains...

I sure don't miss those days at all! Bless the wee chap for trying to clean himself up tho', how cute was that eh? I always found the smell was worse than the mess itself...

You must indeed be traumatised if you can't face chocolate.

Hilarious post Steve and I think your next book should definitely be a funny. You have such a brilliant way with words.

Sorry about the double post. Blogger said it didn't go through, that I'd have to try again, only I didn't.

Now that's a lot of stuff!

Still the old adage goes, better out than in...right?

Löst Jimmy: better for the little 'un, not so good for the parent that has to shovel it up...!

Hi Steve, I somehow missed this one with a busy end of the week at work last week...

Ah, the pleasures of parenting... so you prefer AK-47s to M-16s ? Guess you really are ready for Somalia. But what a trooper that Tom... at least he tried to clean up the damage.

Couldn't help but to be reminded by your story here of an incident that happened about 15 years ago (which I hope means the statute of limitations has expired by now) when our first daughter was about one year old. We'd spent the day in Paris with her, and were getting ready to get in the car in an underground parking lot, when we realized there was a truly foul odor coming from her nether regions. Being somewhat used to the routine by then, after nearly a year of parenting, we had the necessary material on hand to clean and change her. The used (Pampers?) nappy however, quite heavily filled, was a problem, because there was no trashcan anywhere in sight in the vast expanse of parking lot. As I had no desire to go on a long hike to find one, I very irresponsibly decided to place it on the floor, and let the parking lot people dispose of it. After all, I'd paid far too much to park there!

So, having abandoned the bulging nappy on the floor, we got in the car to leave (the scene of the crime). The starting of the car and fastening of seatbelts distracted me, sadly, just enough so that when I placed the car in reverse to back out of the spot, I cut the wheels a little further than I meant to, and rolled right over the little diaper bomb on the floor. The weight of the car did the rest. Like a plastic ketchup pack exploding when stepped on, the nappy totally exploded, spraying its contents clear across an empty spot next to where our car had been, to completely decorate the next two parking spots over and the wall beyond ! I was shocked at the explosive power exhibited ! It had let loose with an audible "WHOOSH" ! The splatter pattern on the floor and wall was incredible !

Suffice to say, we left expeditiously, without looking back... there was nothing left to do or say. And I haven't thought of the incident since, having thoroughly repressed the memory. Do you think I'll be punished in the hereafter ?

So, fortunately Tom didn't decide to do some precocious bedroom painting with his bum production...
Cheers !
:-)

Owen: I am still laughing. God knows what the car park cleaners (if there are such things) thought had happened. One helluva curry! It also reminds me of a less explosive episode we had with Ben when he was still being potty trained. We had spent the day at Barmouth and before getting into our car to head off Ben announced he needed a wee. We too had come prepared and had brought the potty. It was duly used and we got Ben back into the car and drove off. Back at the we couldn't find the potty. We had left it - full to the brim - on the beach front. A nice find for somebody I'm sure.