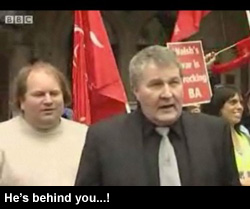 According to Paul Yarrow it does.

Forget oil spills and Afghanistan, what caught my eye in the media last week was the story of Mr Yarrow (pictured above). He’s the guy at the back of the picture looking pensive and frustrated as if, to quote Russell Howard, he’s taking a tricky shit.

Apparently he’s been popping up like a pale bulby version of the witch from Chorlton & The Wheelies in a lot of the outdoor news broadcasts that the BBC likes to hurl at our telly’s in their attempts to keep us informed and up-dated about the various news items that make our world such an interesting place to live in.

Shove a camera, a boom mic and an anchorman outside Westminster and there Paul Yarrow will be, floating in the background like the inevitable anomaly in “Picture B” of a Spot The Difference picture competition.

A quick news podcast outside the magistrate’s courts and Paul Yarrow will be dynamically standing still in the background, usually to the left of the guy holding the microphone, not saying anything but ready, Goddammit, for anything.

Now this isn’t a real life Where’s Wally viral. No. This is a campaign. This is a media war. This is the start of a big movement (and no, I’m not talking about Russell Howard’s tricky shit).

Paul Yarrow, in his own words to the Evening Standard, said: "It is a statement about the image conscious media. I am overweight and people like me are treated as unsightly because of the way they look.

"I could have a valid point about something but the microphone is always passed to the person alongside me. The point I am making is that the more you push me aside, the more I'm going to be determined to make my presence known."

Now, while I admire Mr Yarrow’s stance and his campaign to give a voice to the voiceless I can’t help wondering about the effectiveness of his crusade. Because, to be honest, standing at the back of a news reporter who the viewer will be concentrating on so they can ingest the information, is not a particularly good way to get noticed and, more saliently, to get taken seriously – which surely is the true aim of Mr Yarrow’s campaign. As it is he’s become something of an internet joke. He’s in serious danger of truly becoming a real life Where’s Wally.

‘Cos let’s be honest, when you look at most of our MPs, they’re all rather portly to say the least. Being overweight is plainly no bar to political acumen. I suspect also that a good deal of our richest businessmen have supped deep of the fat of the land and have a few spare tyres rolling about the place – usually between the ribcage and the pelvic floor. And does being overweight ever stop you getting on the telly? Of course not. I bet we can all name 5 celebs who could be deemed as being overweight.

In fact here’s 5 for you now straight off the cuff.

OK. So maybe 5 was a bit much. But my point is this: how much is Mr Yarrow’s campaign for the benefit of others and how much is it to satisfy his own personal need for recognition and validation? Because, let’s be honest, we all feel overlooked and ignored sometimes – regardless of our metabolism – but we don’t all throw ourselves under Jon Snow when he’s performing a to-camera monologue for ITN.

Mr Yarrow’s campaign seems a bit... well, shabby and ineffective. There’s nothing to identify his cause – no banners, no sloganeering. He could just as easily be protesting about the fact people with bad hair get ignored by the media. Or people who wear polo-neck sweatshirts.

Let’s hear it loud and proud folks – equal rights for comb-overs who clothes shop at ASDA!

If he's just standing there, it's not much of a protest. He just try doing mime or something.

Rol: believe me, I'd love to see Paul Jarrow trying to escape from an invisible box or push an invisible umbrella uphill against an invisible mime wind while the BBC's political correspondant blah-blah-blahs in the foreground about economic decline and the war on terror...

Your Chorlton & The Wheelies quip...had me, well chortling!

Apologies for the non-appearance of late but I've been trying to get my holiday leave which finally started this evening...a week and a bit off.

LöstJimmy: there can be no finer reason to be incognito... make sure you have a damned good holiday!

Interesting. I'd not heard of this campaign before.

So does he just stand there then? Not doing anything at all? Just to be seen, standing there? Sorry if I sound a bit dense. I'm a bit confused.

Gappy: no. That's pretty much it. He stands there being ignored. Which is precisely his point. He's ignored because of the way he looks. And not presumably because of his inexpert knowledge of whatever the newsreporter is talking about.

Vicky: I'm telling you he'll be a global phenomenon before tea time.

Being Me: I reckon Mr Yarrow has already clocked up a good hour or two. Sadly he's yet to be offered a speaking part.

Maybe he should start a blog and leave meaningless comments just to get noticed.

This is a tangent to Mr. Yarrow's nonexistence...

But I get so fed up with the way it isn't news unless they have shipped half a dozen OB trucks to a muddy field just so as someone can stand there and tell us stuff the anchor could just as easily said.
Not exactly green is it, to fly a whole crew to the arctic to tell us we are using too much energy and polar bears are slipping into the sea.

So more power to Paul's elbow if it means less 'going live to Droitwich to our reporter at the scene'.

Mark: Maybe he should start a blog and leave meaningless comments just to get noticed... exactly. That's what I've been doing for the last 4 years and it's worked for me... er... hello? Are you still there? Oh and funnily enough I did consider Stephen Fry for my list...!

'What about me? It isn't fair. I've had enough, now I want my share, can't you see, I want to live but you just take more than you give....'

I think there should be equal rights for undertall, curvy women of 5 2!!

Vegemitevix: get in the queue - Mr Yarrow was here first! ;-)

Enjoyed this post. Thanks for giving insight into the "real" world of Britain. And I'm with Vegemitevix and want power to the curvy under 5'2" women of the planet!!

I thought he was part of the production crew...

Femminismo: to be honest I'd much rather see curvy under 5'2" women on the TV than Mr Yarrow...!

The fly in the web: yeah, he's the focus puller... definitely not the script writer...!

Heather at Notes From Lapland said...

Surely this is little more than a rather pathetic attempt to get his 5 minutes of fame. I'd say 15 but I wouldn't imagine he'll get that much.

Heather: because he never gets to speak the poor man doesn't even qualify for subtitles...!