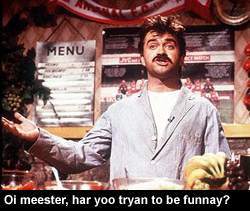 None of you will be aware of this because I haven’t seen fit to tell you (don’t be offended, we all have our little secrets) but I started a British Sign Language course four weeks ago. It’s something I’ve wanted to do for a long time and, to cut a long story short, I’m doing it now because (by a weird confluence of events) my current novel features a Deaf character and my employers thought it would be jolly useful to have a member of staff trained in sign language and are thus paying for me to do it.

None of this is important (well, it is and I may blog about it all separately later). What is important is that the class runs from 7 – 9pm on a Tuesday. I simply don’t have time to eat a meal before the class so I’m usually famished when I come out.

And this is why, on the long walk home, I find myself frequenting the type of fast food establishment that normally in the cold light of day I wouldn’t touch with an 8ft baguette.

I am ill at ease in these places. I’m used to fine wining and dining. Or at least a free plastic toy with my meal.

Take last Tuesday. It was a cold night and I felt like a short sharp unhealthy hit of cholesterol. So I nipped into one of Leamington’s more infamous chip-joints. The Sakarya (pronounced by the hoodies as Zachariah).

I ordered something suitable “street” and “down with the kids”. Cheesy chips.

Yes, I know. Not exactly overflowing with Nigella-esque nutrition or red blooded Gordon Ramsay protein. But, you know, it’s fuel for the fire. A naughty treat.

I order and I wait. The Turkish looking guy behind the counter is monosyllabic and seems to singularize absolutely everything. Cheesy chips becomes cheesy chip. This amuses me greatly but I don’t let this show on my face as his Turkish colleague, shaving great strips of flesh off the kebab spit, is giving me the evil eye. Actually, I say Turkish looking merely because of the kebab. In actual fact I could have easily said Greek looking, Portuguese looking or Eastern bloc looking. The typical unthinking Englishman’s casual racism. I haven’t a clue where they were from.

Could have been Peckham for all I know.

The guy who got served before me has his burger carton open on the counter in front of him and is troughing down his food with one hand and waving the other around as he demands more mayonnaise. Demands, mind, not asks. He makes to hold the mayonnaise bottle himself but the burly Turk / Greek / Yorkshire man behind the counter refuses to relinquish it. He squeezes the mayonnaise out until the chomping pig tells him to stop. “That’s enough, mate.” And off he trots into the cold night air.

When it’s my turn to get served I get offered all the usual relishes – salt, vinegar, ketchup and the ubiquitous mayonnaise. I answer to each “yes, please” or “no, thanks” as I see fit. Stavros hands my food over. I take it and offer one last thank you to the grease filled air.

Both Mr Turk and henchman Turk give me long evil stares.

I leave the building and continue walking home wondering what the hell I’ve done to offend them.

And then it hits me. I was polite. I was quite possibly too polite. In an industry where these guys must see the worst scum of the earth pass through their doors at all hours of the night in various states of advanced inebriation, to have someone – out of the blue and with no apparent reason – say please and thank you must seem like the biggest piss-take the world has ever seen.

Good grief. Is this what the world is coming too?

Well it was either that or the fact I told them that their fathers like to do goats up the arse in sign language... but I doubt it.

They must have been thinking: "What's this wimpy man wearing glasses doing in here, ordering cheesy chip and talking like a Nancy Boy? He must be a writer who's going to put us in his book and make us look like hairy apes."

Tough luck, is what I say. Serves them right for insulting apes.

What an experience! Reminds me of the story of Sheena Iyengar (http://www.ted.com/talks/sheena_iyengar_on_the_art_of_choosing.html) in a Japanese tea house asking for sugar for her tea!

Gorilla Bananas: to be honest, I think monkey may have been on the menu...

Rummuser: sugar! Sacrilege! Do people not use Canderel anymore? ;-)

Oh god, I just got the most horrid image of you being very Hugh Grant-foppish at their counter, saying in reply to their condiment onslaught: "Ummm, well, I mean to say, er, chaps.... I do very much appreciate the offer of, ummm, your sauces. And it's not that I'm not partial of the partaking of.."

Oh put a sock in it! At least you'll know what to do next time. Treat 'em mean, keep 'em keen.

It IS easy to confuse the sign for "your-dad's-buggering-goats-up-the-wotsit" with the one for "may-I-please-respectfully-decline-your-offer-of-this-impressive-aray-of-assorted-condiments"
as a beginner to BSL you may have added an extra finger flip and curl into the mix. It's a common mistake.
Ye'll larn hinny.
:-/

Yes but "manners do maketh man". I was brought up having this phrase rammed down my neck and with the threat of elocution lessons if I dared to speak in slang.
It "kinda" worked though!

Clippy Mat: yes, I think I have a stray middle finger that keeps popping up when it should remain down... it's a common complaint of the modern world!

Suzanne: thank you - and yes me too regarding manners. I do it without thinking - even when the people on the receiving end don't deserve a please of thank you at all!

Did you perhaps mistake the mushy peas for guacamole a la Mandelson?

The fly in the web: I might have commented that their pesto was a bit lumpy...

Is that at Mid-Warwickshire College? I've been thinking of doing a course in Sign Language myself.

Fran: it is indeed and I recommend it highly. A bit pricey at £445 but well worth it. The tutor is a lovely guy and a real hoot to boot. Only been doing it 4 weeks but the class has really bonded nicely. It's a fabulous course.

Clearly you are not demanding your mayo with enough menace. Rectify this next week by merely growling 'mayo' whilst curling your top lip and staring at greek/turkish/peckham bloke's shoes.

Very Bored in Catalunya: I suspect I also wear my baseball cap the wrong way round and pull my trousers too far up.

I did a course in Ameslan (American Sign Language) but all I seem to have retained is how to say 'eff orf'. Funny that!

and they were thinking : "our father may well have done the goat up the arse but you're stood there eating it arsehole" happy thought :0)

Kelloggsville: ha ha! As an old pal of mine used to say about fast food, "it's all lips and arseholes"... you're probably right. Which is why I stuck to the cheesy chips! ;-)

Previously (Very) Lost in France: they taught you to say that? Wow! Somehow I don't think I'll be having access to a similar vocabulary...!

Learnt it at school, was good for sending geek messages across the classroom ( this back in the mists of archaic time before even fetuses had their own i-phones. ) But I can honestly say no person of impaired hearing ever benefited from it at all.

Keith: it was taught at school? Hmm. Wonder why they stopped. I think a good grounding in the the Deaf alphabet at the very least would benefit everybody, not just those in the Deaf community who must get very frustrated at hearing people for not taking one hour to learn something which is suprisingly easy (the alphabet that is - not the entire Deaf Language).

Okay, thanks. Might think about that for the near future.

Fran: the Deaf course or the constituent lips and arseholes that comprise fast food?

So polite they thought you were part of an establishment conspiracy!

LöstJimmy: it seems it is possible to be too polite!

I love being overly polite and smiley to people that are intent on only scowling and muttering monosyllabic uttering across the counter. Everyone needs a hobby, eh?

Heather: you should come to Leamington Spa... you could indulge your hobby to exhaustion...!

Stevie babe - next time wear a wetsuit. You will look well fierce!

Alternatively just take me with you.

LCM: not sure my finances could run to 2 cheesy chips... but if you wear that wetsuit we might get a double portion for free.