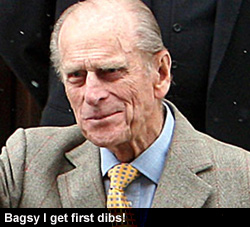 In a move set to send disturbing undercurrents up Kate Middleton's undergarments, my secret news source has revealed that Prince Philip has resurrected the age old right of Primae Noctis or Droit de seigneur whereby a Lord has the right to take the place of the husband on the first wedded night of any of his serfs' daughters.

"Dashed all!" Said a positively beaming Prince Philip. "At my age one has to take one's pleasure where one can and that young whippersnapper, Willy, has a whole lifetime ahead of him of taking his pleasure where he may. For me, time is running out and, well, bugger it, that Kate Middleton is a comely bit of stuff. Willy will just have to make do with sloppy seconds tonight."

Asked what the Her Majesty The Queen thought of this planned turn of events, Prince Philip replied: "To be honest the little old woman trotted off quite happily, mumbling something about finally having a night orf. I'm popping the Viagra as we speak."

My news source has told me that Palace officials have tried to no avail to point out that Primae Noctis cannot be enforced in this case owing to the fact that Kate Middleton is neither a serf (for all she is a commoner) nor a virgin. To quote Judi Dench as Queen Elizabeth I: "that cherry has already been plucked and not by you."

Indeed Prince William has been seen snorting and guffawing around the Palace grounds saying, "I've already 'ad 'er wot my granddad wants to do, ain't I? So's he'll be the one with a wet willy not me. Unless, o' course, he does it the Greek way, know worrimean?"

However, after a Palace official pointed out that Prince Philip is indeed of Greek persuasion, both Prince William's and Kate Middleton's faces were seen to turn deathly white.

This reaction is not at this time believed to have been caused by copious amounts of Charlie (Prince Charles has instead been keeping his fatherly advice on 'how to be a good husband' firmly to himself)...

We have our own WillyLeaks!

The fact that Kate is not a virgin removes the last vestige of vicarious pleasure from this tedious event. As for Prince Philip, he can go and fuck a horse.

Marginalia: if your cell is next to mine, kindly keep the noise down; I'm trying to sleep.

Gorilla Bananas: that is no way to talk about the Queen.

Oo-er missus! What a carry on!

Laura: I've long remarked on the similarity between Prince Philip and Sid James...

Now if only the BBC commentary team had had the sense to employ you instead of the inanely grinning dummies they produce on these occasions....

He was definitely chatting up Pippa the sister on the balcony. Not that I was watching.

The fly in the web: I did ask them to do so but they just mumbled something about "complaints" and "license payer's sensibilities".

Nota Bene: "he"? Prince's Philip, William, Harry, Charles or that religious guy in the pointy hat that talked a lot?

LOL. What? Not a virgin? Is that even allowed??
You should have been in the box with Piers helping AC keep his facts straight.

MissBehaving: I'm pretty sure Prince William wasn't a virgin too...!

Vicky: probably asking for her help down the stairs with his "dicky leg".

Made me really laugh and I needed that as I'm back in cold England. Thanks. Missed it all and although I don't mind Kate, the only ones I like among the Windsors are the corgies! Ciao. A.

Lunarossa: and even they bite and piss on the carpet!

Orf with his 'ead

Löst Jimmy: his head going orf is the one thing Kate fears the most...

I had wondered how such aged ones held out without a bathroom break during such a long ceremony. Your mind went waayyy further into the darkness.

Leave it to you to lower the tone :P

Livi: I consider it both a duty and a public service.

I've been away a few weeks writing but have been reading if not always commenting - catch up properly soon. Liked this post - Reckon old Philip would have been pretty good in a Carry On Film too.

Mark: he is the Sid James of the Royal family. The ultimate accolade!

All I can think to say is, you've stumped me with this one. But I know you're going to reply with "that's wot she said, innit?" or something. So go on.... get it over with ;-P

Being Me: I don't make the news, love, I just report it.

He'd be more likely to shoot her.

"Dear, there's a commoner in the palace. Fetch my hunting rifle!"

Rol: it'll give the stags a break at any rate.

That old ‘Droit de seigneur’ one just makes me laugh out loud every time I see reference to it. I mean it’s such a gross bloke thing. I can just picture some right royal shithead getting drunk as a skunk one night in his castle with all his debauched and depraved cronies while they rip apart another roasted goat, as he calls for a vote for a new law he’s just devised called a ‘Droit de seigneur’ – to loud cackles and jeers of laughter from every man present. I bet he was English too and an Arsenal supporter.

Thinks?...does Viagra have the Royal Seal of approval?

I dare you to answer that question authoritatively without Googling it. Okay - let me save you the bother of your most predictable answer then…”I’ve really no idea Phil, I’ve never smoked the stuff”.

Mind you, when Pippa eventually announces her betrothal to some Chelsea geek, I might try my luck disguised as ‘The Black Knight of Bucklebury’ waving a bit of old parchment with the words ‘Droit de seigneur’ written on it. “Now bend over, think of England and brace yourself Phillipa dear…this’ll only take but a minute..”

Bet she’d be up for it too.

Phil: I bet Pippa already has a copy of the original parchment and vets the fathers, grandfathers and second-uncles-twice-removed of all potential boyfriends for stamina in the sack and virility. She is, in short, a Royal goer - I'd get into training now if I were you.