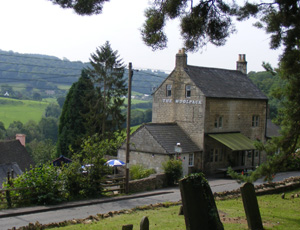 One of the places we visited during our recent stay in deepest Gloucestershire was Slad. It was very much an off-the-cuff visit that we made at the end of the holiday on our return journey home as we knew beforehand that it was a tiny little village which sported no more than a church, a few houses and a pub. Hardly a tourist hotspot and not really worth an entire day out.

However, it was the birthplace and final resting place of Laurie Lee, one of Karen’s favourite authors. Most of you, I’m sure, will be familiar with the title Cider With Rosie even if you have never read the book.

I wasn’t expecting much from Slad to be honest.

But to be even more honest it was one of the most beautiful, peaceful places I have ever visited. There was a gentle calmness about the place which soothed the soul.

We found Laurie Lee’s grave with ease, pottered about the village – barely more than a single street – and then settled down for an ice cream at The Woolpack.

I was a little nervy of the pub if the truth be told. Karen had told me about one of the memories Lee had recounted in his book which centred around one of the village lads meeting an unfortunate end after a night of drinking in this very pub. Having travelled to New Zealand and returned much wealthier, said local boy was rather full of himself and, much to the chagrin of the those he’d left behind who’d never travelled much further than Pitchcombe, he proceeded to spend the entire night boasting and I daresay belittling the relative parochial mentality of his old childhood chums.

His pride met with fist and blows at closing time and the locals, having sweetened their own worldly inadequacies with the gift of a good kicking, left the poor chap unconscious in the snow.

He froze to death and was found dead the next morning.

The police investigation drew only shrugs and silence and there the matter ended – except for those in the know, of course. I’m sure Lee must have ruffled quite a few nervous feathers by including the story in his memoirs.

Thankfully I have not (as yet) travelled to New Zealand and decided I would keep my past holidays to Egypt and America under wraps... just in case. After all the pub could well still be a local tavern for local people.

As it was we were met with good humoured friendliness and a kindly, non-curious acceptance given that it was plain we were complete strangers (there can be no more than 20 people living in the entire village).

I think we spent a couple of hours there. Doing not very much at all. Just enjoying and soaking up the atmosphere and dreaming.

For all there were telegraph poles, chip and pin machines and modern cars parked about the place, it felt as if Slad had somehow been loosed from the normal constraints of the passage of time. Change obviously comes slowly and by small increments to this tiny little village. Even the adverts on the pub waste bins were for R White’s Lemonade. I haven’t seen that advertised publically in years.

It was a good place. Life felt wholesome there. Honest. More simple.

Of course, these are all just first impressions made in the space of a single moment. For all I know there was a bondage club in the house next door and the woman at the end of the road regularly hosts parties where car keys are thrown into a fruit bowl where peaches of all nationalities have never rested but have instead been bounced off the walls and a rubber sheeted four-poster with the kind of passion that one only sees in French art house movies.

But somehow I don’t think so.

Laurie Lee sleeps peacefully in the church yard over the road and Slad is still very much his dream. 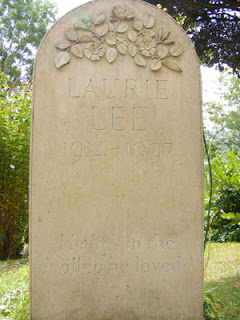 R. White's ginger beer goes off pop
A penny on the bottle when you take it to the shop.

Skipping rhyme when I was a child....so the ad was indeed something from long ago.
My uncle was a director of R.White when it was taken over by Pepsi.

Do you know LL's book about going to Spain with a violin?

The fly in the web: all I know of R White's is their famous TV advert from the 70's that featured music written by Elvis Costello's dad. I'm ashamed to say I haven't read any Laurie Lee but after my wife's recommendations I shall.

This is incredibly moving. I never realised that R White's Lemonade was still being sold. If they want to do a remake of their famous advert, I think you should audition for the lead role.

Gorilla Bananas: I have the glasses and the pyjamas already.

So there was glad to be had in Slad.

Was there a corseted post mistress with a stern eye and and warm heart ? Or was that another bucolic literary village ?

And what kind of French films are you watching ? All I ever see is angst and cicadas. And shoe boxes.

Keith: alas, we were in the wrong part of the country for Dorcas Lane or Emma Timmons. And, in all honesty, it has been far too long since I've enjoyed a rampant French film.

I have never heard of Mr. Lee but now am curious to read his memoir. And visit Slad. Maybe churn some butter and raise a barn.

Wanderlust: these sounds like wonderful life goals which of which I greatly approve.

Ah as a teenage boy I remember Cider with Rosie well...the place sounds a delight!

Nota Bene: I feel ashamed that I passed up the cider and ordered a coke.

I love it when you write like that... and a cemetery photo to boot; what more could I ask for ? Maybe a little fading paint on the pub sign, but not much more. :-)

Good to see you out and about the countryside...

Owen: I did think of you when I wrote this post... glad it hit your soft spot!

even beautiful places have a dark past!

I never knew that LL was buried at SLAD - occasional pilgrimages like these are enjoyable, so long as tehy don't become maudlin - or hideous tourist traps like Dylan Thomas's grave in wales.

The Bike Shed: no chance of that; Slad has kept itself pretty much to itself and well off the tourist trail.

I find it intriguing that in a country so tiny, with such a large population, there are pockets that still house only a few dozen (if that) people. Fascinating.

Being Me: the UK is the smallest biggest kingdom in the world... we've lost Doug McClure around here somewhere too.

I love going to places linked with literary figures. You paint a great picture of Slad. My next ambition is to go to Adlestrop where Edward Thomas wrote his famous poem, although he was only sitting on a train, travelling through.

Fran: I quite fancy doing a UK tour of such places.