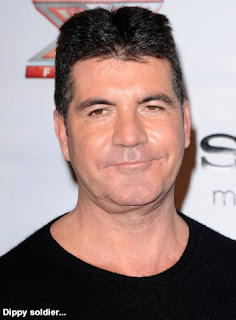 I’ve never watched Britain’s Got Talent – partly because a show like that tends to prove that Britain absolutely doesn’t and mainly because it just seems to be another star vehicle / cash cow for Simon Cowell. So it was with interest that I read that one of the participants had thrown some eggs at the judges live on last Saturday’s show.

To be honest my first reaction at reading that a woman had thrown her eggs at Simon Cowell was to think “blimey, that’s someone really desperate to have a baby but the alimony would be worth the 3 minutes of discomfort” (that’s the conception not the giving birth). And then all glibness aside I actually felt a pang of regret that I’d missed the glorious spectacle of Simon wiping egg smegma from his forehead onto the waistband of his trousers. It seems the young lady in question (I can’t be arsed to publicise her name) wanted to protest at the “dreadful influence” Simon has had on the music industry.

And much as I’d enjoy jumping onto the “let’s give Cowell a drubbing” bandwagon I have to say “hold your horses” at this point. The influence he’s had on the music industry? I daresay he’s had some. Once. Occasionally. But let’s not build his part any bigger than it has to be. He’s not that powerful. He doesn’t hold the entire music industry in the flat of his hairy palm. Anyone who’s at all serious about music views Cowell and his annual Cowell Bots as a bit of an irritating joke, surely? They rarely have any credibility and rarely last longer than the chocolate your Auntie Doreen bought you for Christmas. His influence is truly negligible. It’s just that, such as it is, it is well publicised. That is the result of 2013 celebrity sick Britain not the result of Simon being a god-like impresario.

And to be honest, if Miss Egg wanted to strike back at those who have ruined the music industry she’d have to take out half the population of the UK, i.e. all those daft buggers that bought the ruddy music in the first place and made Cowell’s crapola so popular.

That’s going to take a lot of eggs, believe me.

On the bright side, someone throwing eggs at Cowell sure beats millions of tasteless teenagers throwing their money at him… And I’m sure somewhere there’s a joke to be made about battery farming and Simon’s cheap celebrity production line that churns out so many rotten eggs each year… I just can’t be bothered to make it.

I just ain’t got the talent, see?

I once got egged walking back from the pub one Friday night with friends. Shocked the life out of me, but then I was rather impressed with the young man's throw. He lobbed the egg from a moving car on the other side of the road, and still managed to strike. Credit where credit's due...
Hello, hope all is well :-)

Suzanne: that's assault! Plain and simple. He needs to feel the full yolk of the law!

It makes a change for a celebrity to get egg on their face literally, rather than figuratively for doing something really stupid...any way, never seen the show, never will...but I like Will Young

Nota Bene: if she was at all serious she would have thrown a hand grenade.

I daresay Mr Cowell has thought of that already and is reviewing his security options. The one thing that will hatch from this egg will be paranoia.

I'd like to watch Simon Cowell lay an egg. A cube shaped egg about the size of a grapefruit. Why can't viewers vote him off the show?

Gorilla Bananas: I'd pay good money to see both of those suggestions realized.

Didn't I read that there is a suggestion it was a PR stunt with Cowell's approval - at least that's the suspicion.
I wouldn't put it past him.
I don't get why his programmes are so popular. Never could stand BGT. I did watch a series of the X Factor but I think it aged me by about 20 years.

Craig: if that's true Cowell and his egg laden assassin have my utmost contempt.

When you added that final see
You sounded all South Wales

John: I often see myself as a younger Rhod Gilbert.