You Have No Defence Output, Earthling! 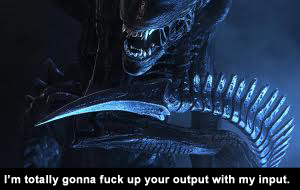 Just in: shock news that will have America's mid-West sleeping even more frequently with loaded shotguns (and see David Bowie preparing for a good probing) - The Ministry of Defence has closed down its UFO desk because it feels its Pluto Population Investigation unit is serving no purpose at all and is diverting valuable resources from more important defence purposes.

In layman's terms that should mean less annoying PPI texts for us all and more coffee for other desks in the MoD. Ha ha ha!

Actually. I made that bit up about the Pluto Population Investigation unit for the sake of a lame PPI joke. And in truth, it sounds like there really wasn't any kind of a "unit" at all.

Just a desk. Probably at the back of a huge open-plan office. Right near the photocopier. Manned by some poor guy in a seventies bomber jacket who never ever got invited to join the office lottery syndicate.

And actually it's only the UK MoD. So probably the USA is totally unaffected by this decision and is still in a state of high paranoia. So no change on the sleeping-with-shotguns front then.

That aside, it is sobering news though. When you think about it.

Now that either means the person manning the desk is so inept at collating the tonnes of information he must undoubtedly receive every year that the entire system was just unworkable or - and this is entirely my interpretation - the MoD has admitted to itself that it just cannot defend us against alien invasion.

They are in fact, even as I type, diverting funds to make alien proof Anderson Shelters to save their own scrawny military arses whilst selling the rest of us down the river. "Look, Mr Alien, we freely give you 99% of the human race without any kind of resistance at all, just leave us poor whimpering guys in uniform alone and please don't probe us for unobtainium because we haven't got any."

I think this is a tacit confession from the MoD that as far as "life out there" is concerned we are probably outgunned, out-thought and totally outed in both a gay and non gay way and there is absolutely no point in throwing anymore money at Star Wars defence programmes or sending Chuck Berry records into outer space.

We are ripe for the taking. We may as well all offer our naked arses to the sky right now.

Go on. Just pull down your kecks, bend over and submit to the will of Emperor Ming. It may take some time but just remember there's a lot of us on this planet and it'll take a while for his probe to reach us all. Sure, the unbelievers are going to moan and may even call the authorities... but who's going to stop you?

Those wussies have gone to ground. It's just you and me and we've got to accommodate ET's glowing finger as best we can.

Can I nominate people for the first thrusts...you know...the thrusting sort who walk all over us...

The fly in the web: be my guest. I imagine it will be quite a list.

The alien butt-probing is the result of confusion about the human anatomy. What they really want is to make human babies they can take away and rear themselves. Get a sex education diagram tattooed on your tummy and you'll escape with a hand job.

Gorilla Bananas: aliens rearing humans? Isn't that just the probing thing by any other name?

Nota Bene: proof of Pierce Brosnan's ability to act?!? What planet are you from, man?!

Time to Bring Back Torchwood then eh?

John: unless they employ a bit of romance and wooing.

Amanda: if anyone can show aliens a thing or two about butt probing it's Captain Jack.

Rol: thank you. Proves my point.