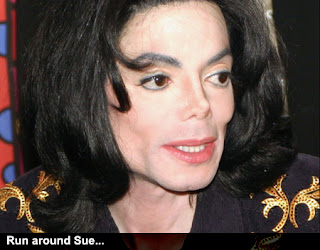 Amid all the news stories of rain battered Britain and Scottish and English politicians squabbling over the Queen’s head it was nice to come across something so completely ridiculous it could only have happened in France.

It seems that the French courts, that eternal bastion of sanity and commonsense, have decided to award 5 Michael Jackson fans (is this all of them?) a symbolic payment of 1 Euro each to recompense them for the “emotional damage” caused when Michael Jackson’s pet quack, Conrad Murray, caused his master’s death by blowpiping one too many anaesthetic pills down Mr Jackson’s falsetto oesophagus. Apparently a total of 34 Michael Jackson fans (OK, that must surely be all of them?) had actually sued Murray but the Orleans Court ruled that only 5 of them had sufficiently evidenced proven emotional suffering to deserve a pay-out. Presumably the other 29 were considered legally insensate to their own irrelevant sense of grief or were – shock horror – considered to be merely cashing in on the fact that they happened to own an original beaten up copy of Off The Wall.

Apparently the 5 successful claimants had proven their case “with the help of witness statements and medical certificates." Basically their friends and GPs had signed an affidavit to the effect that these people were “deeply sad”.

Their lawyer, Emmanuel Ludot, said: "As far as I know this is the first time in the world that the notion of emotional damage in connection with a pop star has been recognised."

It is clear to me that this is going to set a dangerous precedent - one that I mean to take every advantage of.

Personally I would like to sue Michael Jackson (or rather his estate) for having to watch him leg-snap his way through an utterly cringe-making performance of Earth Song during some UK award ceremony a few years back. The fact I can’t even remember the name of the ceremony is testament to how upset I am about it all. This is what happens when you suffer true emotional trauma. Your mind buries things and tries to forget. But I am haunted by waking dreams of Michael "I'm Forever Blowing Bubbles" Jackson hugging lots of children whose dress code appears to be “impoverished chic” and only the Messianic appearance of Jarvis Cocker ever brings the nightmare to an end.

I’d also like to sue Michael Jackson for the entire Bad album because, well, it was very very bad but I daresay they’ll use the old “does what it says on the tin” argument against me and, yeah, I’d have to admit I probably should have seen it coming. Caveat emptor and all that.

But I’m now wondering if I could perhaps throw this compensation thing even wider. I mean, why stop at pop stars? I’d like to sue Dave Lee Travis for describing himself as “cuddly not predatory” in his recent Operation Yewtree court case because, regardless of the fact that they’ve cleared his name, I just found that statement bone-squirmingly creepy. It emotionally damaged me for at least half an hour. That’s got to be worth 50 pence of anybody’s money. Not to mention the cost of bringing the whole thing to court.

I’d also like to sue Vic Reeves and Bob Mortimer because I have never found them funny and as a consequence I feel inadequate when around those who evidently do. I’d like to sue Hugh Fearnley-Whttingstall for putting me off my dinner whenever he’s on the telly; Louie Spence for making me wish I had immediate access to a firearm and a clear line of sight; Katie Price for making me feel that actually, against all the odds and my every testosterone fuelled instinct, breasts can be too big; Eamonn Holmes for filling me with so much murderous bile I could actually conceive that one day it might be justifiable to commit global genocide if it guaranteed his individual demise and, finally, the guy who works in the newsagents around the corner from where I work who sits with his paunch pushed up so close to the till drawer he has to scoop my change out of his duodenum whenever I buy a Mars bar, I’m telling you it just doesn’t taste the same after pocketing those too-warm coins.

All I need is Emmanuel Ludot’s email address. Unless, of course, he reads this post first and then pre-emptively sues me for the future emotional damage I’m about to cause him.

I’ll just bung a pound into the kitty now, shall I, and have done with it?

Suing is for wimps. I believe in arresting people, particularly this Ludo fellow for making a mockery of the legal profession. He's not the first one, but you've got to start somewhere. Wasn't 'Bad' supposed to be 'Good'? I think you may have exposed yourself as a tone deaf bumpkin for insulting that one.

Gorilla Bananas: No, Thriller was good. Off The Wall was good. Bad was awful. As for arresting people I think making a start on French lawyers is an excellent idea.

Definitely with you on DLT -ewww, nasty!

Suburbia: it gave me a horrible clammy feeling up and down my spine... exactly as if I'd been embraced against my will by an over-weight, aging BBC ex-Radio One DJ.

So glad to finally find someone else who's mystified by the "humour" of Vic & Bob.

Rol: Bob I can just about cope with but Vic makes me angry. He's just so unfunny and yet thinks he's some kind of comedy god. Curiously I don't mind his records.

That. And plenty more.
When you get the payout, I'll take my share, thank you very much.

I don't get Vic and Bob at all. Not just on the funny level - they just totally confuse me.

DLT cuddly thing left me completely creeped out. I think I should get at least £2 for him entering my thinking sphere.

I wish you could see your Valentine's day capture picture and text, it's just so hearty, pink and red roses. Seems odd in a post that's suggesting a hot poker is too good for Eamonn Holmes,

Arrest all French lawyers...a wonderful idea.
But it's just for starters....

K Ville: oh I don't know. The thought of taking a hot poker to Eamonn Holmes gets me all loved up big time.

The fly in the web: if we're going for starters how about if we just say "the French" period?

Can you sue retrospectively? If so I wonder whether Ronald McDonald could sue the Elvis Presley estate for the dramatic fall in Big Mac sales following the King's death on the pan due to the excessive consumption of BigMac meals.

I'd have thought Jacko should sue himself. His death must have been pretty traumatic for him don't you think?

Marginalia: I'm sure Elvis could countersue McDonalds for the fact he died from an obesity related illness in the first place. As for MJ suing himself... it would be amusing if, like the French courts, he decided his suffering was only worth 1 Euro.

Can we add Hugh Laurie to the list for an appalling American accent!
He has totally lost all street cred with me now......

Vicky: sue The Prince Regent? That's definitely got to be worth a bob or two!

I remember the Earth Song event- wasn't it The Brits?

Ah Trish, your many kindnesses to me mean I will forgive you anything. I'll certainly never sue you.

I'm sad because I have reached the end of your post. I demand my euro

Nota Bene: how about if I write another post in a day or two?

Fran: are you calling me crazy? If you are I'm going to sue.

Can I claim for loss of earnings for every time that Santander commercial comes on with Rory Mcllroy clearly laying pastry strips on the top of a pie, and that girl pops up and says "I really like what you're doing to that cake " prompting me to jump up and shout " IT'S A PIE" every bloody time.

Or maybe the cake is bellow the counter, at Rory's groin level, and this accounts for why she seems to be curiously damp ???

Keith: I've missed this advert. It has passed me by completely and I am intrigued. Are you sure it's not just a crusty cake? Or a cakey pie?