Does It Have To Be Bad? 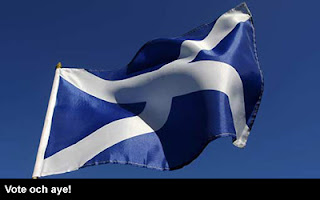 I’ve steered away from writing about the forthcoming vote for Scottish independence because (a) I don’t consider myself to be an overtly political animal and (b) despite strong Scottish family blood a-swirling in my veins from my dad’s side of the parental tree I don’t really see how a nurtured Sassenach who’s lived in the heart of England all his life has any right to say yea or nay on the question of whether Scotland should be independent or not.

But it seems everyone has an opinion these days, especially those English politicians who’ve done eff all for Scotland over the years and up to this point haven’t cared a stuff about how it has fared. Geez, even J.K. Rowling has thrown a good wodge of her own money behind support for keeping Scotland forever yoked to the millstone of fake tradition that is British unity.

And I guess that paragraph hints at where my true personal leanings lie though I admit my arguments are purely emotional, possibly romantic, and wilfully have nothing to do with fiscal systems or the complicated bureaucracy of devolved governments.

To me Scotland has always been another country; always been its own country with its own identity and personality. The people, the landscape, the atmosphere are foreign. And I mean that as a massive positive. I like the idea of Scotland being truly independent. If for no other reason than the rather shallow pleasure I will get from the inevitable exoticization that will occur.

But that’s not the real point of this post. For me the central question is this: independent or not, does it have to be bad? All I’ve heard is various bad tempered politicians griping about what Scotland / England will lose if the yays for independence swing the day. And then other infantile politicians spitting their dummies and threatening to take their ball away and not play anymore if Scotland wants to be in charge of supplying their own kit. All blatantly ridiculous. It seems someone has to suffer no matter which way the vote goes and there’s going to be a lot of sulking.

But really? Does it have to be that way? Can’t Scotland have its independence and England and Scotland still work together for the benefit of both? Does it have to be miserable? Why can’t it just be good for everybody? Because at the end of the day life and trade will still need to continue. There will still be movement from across both sides of the border (even if it’s only the Queen digging out her passport before she enters Balmoral). We can all still play and work together.

As in any kind of relationship, a sense of independence is healthy and usually good for both sides. England needs to be less clingy and less possessive. That kind of behaviour always drives a partner away or into the arms of another.

Perhaps if we (Scotland) had a better choice of leader than the wee orange spacehopper who's currently in line for the job, it would be a no-brainer on how to vote on I-Day. As it stands, he doesn't even have a Plan B in action as to what currency we will be using! Having said that, it's no use having a devolved parliament of our own. Being free from the shackles of Westminster is what it's all about for the majority of the 'yay-ers'. The Nationalists among us have their own opinions. That's what scares me about the whole thing. Once and if they get what they want, there's no going back. That's a very questionable prospect.

Nana Go-Go: whichever way the vote goes, whatever the future holds, ultimately people will make the best of it - life and progress will not stop. And that's surely a source of hope?

I think the wrong question is being asked. The political system is completely unbalanced and we should be looking at a federal system that gives England Scotland Wales and Northern Ireland it's own parliament with a central government responsible non-country issues. It would allow each nation to develop its own national identity whilst retaining the benefits of the UK

There's more to Scotland than the SNP....the social media campaign for the Yes vote shows a way forward and an alternative way to 'do' politics rather than relying on the usual parcel of rogues in a nation.
I think the panic is on among the Westminster politicians in case a Yes vote shows another way of running a country without victimising the disadvantaged.
Might give the people of England and Wales ideas....

Nota Bene: and the central government featuring proper representation from England, Scotland, Wales and Northern Ireland... yup. I could go for that.

The fly in the web: England and Wales already have ideas, what's worrying Westminster is a people poised to finally act on them.

It's a mad idea. Will all the Scotch millions living in England become foreign nationals or, perish the thought, English citizens? You can't regain the yolk and white from scrambled eggs.

Gorilla Bananas: but you can separate the two quite easily when they are hard boiled eggs.

I've posted you your Mel Gibson face paint and an exceptionally itchy kilt.

Barry Coidan: if you were a true Scotsman you'd've hand delivered it yourself to save on the postage.

K Ville: you'll be sorry when they take their Cranachan away with them.

Far be it from me to have any sort of opinion, living in neither country and so far away.... but, I do have to agree with you: it IS most definitely a different country. Different people, different landscape.

Even over here in Aust., there is a very noticeable difference between the English and the Scottish. And although I am descended from kin from both countries (I'm barely even a 1st gen Aussie)..... I have to say, the latter scare me.

So I say... whatever they want, give it to them *unconvincing grimace-smile*

Being Me: I'm certain that arguing with them will be a bad move. It's never a good idea to piss of a Scotsman.

Fredulous Yo: you can't please everybody all of the time... not worth even trying.