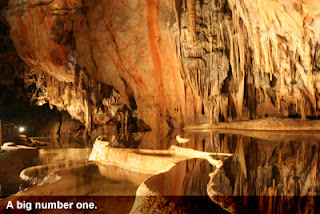 It’s possible that my youngest picked up some American slang from some TV show or other, or possibly one of the computer games he plays and made the connection with John and toilet.

I’m theorizing wildly in the hope of justifying my part in an act of gross geological vandalism.

We’d gone to the Peak District at the beginning of our summer holiday and despite the weather being surprisingly good we’d elected to spend part of our trip underground away from the benevolence of the British sun investigating one of the many cave systems that honeycomb the area.

We were spoilt for choice but in the end Treak Cliff Cavern lured us in with reports of it being the last working Blue John mine in the world. It was suitably impressive and we had the usual local-lad-come-good-vacationing-Uni-student tour guide to see to our geological interpretative needs as we were sashayed past stalactites, stalagmites and amorphous rock formations that resembled everything from a witch on a broomstick to a huge melted breast. In fact melted breasts appeared everywhere to my mind but I’m working through that with the help of a counsellor and a colourful set of Rorschach test cards.

About half way round I was assailed by my youngest who, by way of Brian Blessed whispered tones that shattered the sonic receptors of any bats in a 5 mile radius, announced that he needed the toilet. Urgently. Urgently to the point where a sudden deluge was imminent and the chances of reaching either the entrance or the exit were posited as nil. This was further emphasized by the mini River Dance that he then enacted out to the backdrop of a million years of ball-achingly slow phantasmagorical rock formation.

I admit, I thought I’d pulled a flanker. I thought I’d got away with it. I guessed / hoped that the tour guide had not picked up on the urinary distress calls and when he moved the group on to the next interesting lump of ever moistening rock I kept me and my youngest back. Once it was sufficiently dark and quiet I bade him let loose with his little cup that forever runneth over and kept enough distance to avoid splash-back but remained sufficiently close to ensure he didn’t disappear body and anorak down a hidden pot hole.

Shoes shaken adequately dry we then re-joined the tour group further into the cave system whistling a tuneless song of complete innocence.

Nobody was none the wiser.

My wife later told me that while we were busy with business elsewhere the tour guide had alluded to our absence in almost dramatic tones along the lines of “oh gosh, we seem to be missing a couple of people, I do wonder if they’ll be along soon… cough, cough…”

I’m just thankful that my boy managed to spread his jet relatively quietly and the group weren’t treated to the sounds of a sudden waterfall thundering out of nowhere in the neighbouring cave. That would have been much harder to deny.

As it is, if you are a visitor to Treak Cliff Cavern in about 2000 years’ time and one of the stalactites has a distinct yellowish cast to it… I hereby apologize profusely for vandalizing in 30 seconds what nature took eons to create.

When you've gotta go, you've gotta go! Not so easy if you're a woman but have you seen those things they use at festivals and the like for women to pee into. They look disgusting and even worse to use, I'll wager. They never had anything like them at Knebworth or the Isle of Wight!! I hear Kate Bush got rave reviews in London last night but don't go expecting to hear 'Wuthering Heights' or 'Baboushka', she ain't doing any of those numbers. Her son also features quite heavily in the show, I believe. Enjoy.

Are they known as She-pees? I think I saw one on TV once and it didn't look too appetizing. Yes, I've been reading the Kate Bush reviews with interest. I didn't doubt her for a minute, wonderful woman. Really looking forward to it.

Just to tease you, they say that she sings 6 or 7 songs at the beginning without all the bells and whistles then suddenly, the show totally opens up and it's wonderful. I'm just telling you this because I'm totally jealous I'm not going!!!We want to know all about it immediately afterwards, ok? x

Nana Go-Go: yes, I read that too... and she sings most of the track from both sides of Hounds of Love, stuff from Aerial and 50 Words For Snow. I haven't been this excited about going somewhere for years!

You should have let him pee on a melted breast so he'd know what water sports were before learning about them in sex education class. Does your beard feel damp in that sort of environment?

You and the boy pulled a Charlie and Grandpa Joe, of sorts! Except, instead of drinking the fizzy lifting drink.....

Gorilla Bananas: I'm pleased to say I kept my whiskers well above the tide mark.

K Ville: and would you recommend one (not necessarily to me)?

Being Me: I'm glad there wasn't a glass elevator at the end...

I keep reading that California is running dry: I'm collecting my pee in a 1,000,000 gallon container and shipping it over to help out Uncle Sam.

Get your youngest to attach his todger to a water can - and the rest of the family if they're amenable - and join this great enterprise.

Barry: are you taking the piss?

If your boy had gone for a pee in The Devil's Arse I think that would have been acceptable, even applauded.