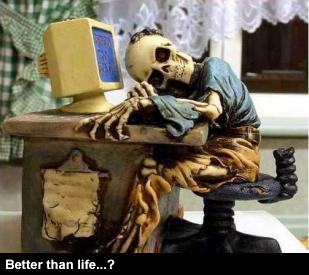 The male sheep one has potential. You would have thought it had no chance against the dragons, but a ram has horns and dragons don't like it up 'em. You should also consider a game called "Beardcraft", where the bearded hero is mocked, jeered and insulted by everyone he meets, but just grins at them like a smug git, causing his beard to grow in length.

Gorilla Bananas: hmm. You seem obsessed with my beard. Is this a case of beard envy? Were you mocked by the guitarists from ZZ Top as a young primate?

Skyeram.
Brilliant. Still chuckling to myself.
Am going to have weird dreams tonight. All you fault of course.

(You forgot LinkedIn... and it will hunt you down for that)

Being Me: Aladdin's Crud? Euw! After thousands of years there's gonna be a helluva lot of crud in that lamp...!

As for your Super Mario Brothers (Real Life Edition) - the first few rounds should involve trying to find a plumber who's not too busy and then staying in all day waiting for him to turn up. Extra points if you don't end up pacing holes in your carpet.

Rol: I'm guessing we're going to have to factor copious tea breaks into the gameplay too. Hmm. This could end up being completely open ended play.

What would you call a game wherein someone of warped mind, with too much time on his hands,sat around and thought up twisted game scenarios?
You did make me smile:)

English Rider: hmm... sounds like some kind of real life simulator. I don't think that type of game would really take-off.

I'm drawn to Skyeram - me and Adele have this thing going on - but... if you're a male sheep all you'd be thinking of is shagging or being shagged. Frankly little dramatic development. Unless you have this innocent policeman...

Barry: police and social services are indeed knocking on my door - demanding that I unlock it and let them out.

I can't wait for the DLC.

Fredulous Yo: OK. Techno-fail on my part. I had to Google DLC.

Crikey Steve you may well have some good ideas there...

Yes. I think you grasped the nettle there. I suggest we have an ongoing strategic discussion about future gaming scenarios which we can run up the flag pole and see if they fly or croak like the frog on the lilly pad of life. Obviously I'm submitting my application for strategic director of your venture

Amanda: I'm full of them. At least I think that's what my wife said.

These made me laugh! I don't play computer games although my friends try to make me, sending me links to Candy Crush Saga or whatever it's called.