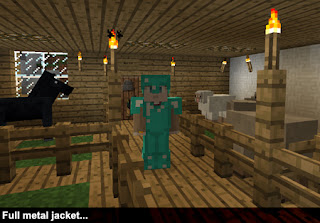 I’m not saying my youngest boy has Teutonic tendencies but playing Minecraft with him – as I recently have made a point of doing as part of my ongoing fatherly duties – has uncovered a hitherto hidden seam of authoritarianism which is really very alarming.

I make a point of playing at least an hour with him on a weekend or holiday days to hopefully instil in him the finer qualities of fair play, altruism and good gamesmanship. I have never considered myself an optimist but in this endeavour I am beginning to understand the sheer cloud-cuckooness and refusal to accept grim reality required for such an undertaking.

I am also beginning to see that my boy has a fine appreciation for all forms of digital Schadenfreude. Although in gaming parlance this is commonly referred to as “trolling” or “griefing”.

For those of you not familiar with the concept of Minecraft, basically it is a computer game which allows you to both mine for resources and then build with them – build houses, palaces, cave systems; you name it, it can be built. Plus there are various autonomous characters (“mobs”) – some benign, some malignant – who you can interact with, everything from bartering with to being killed by.

Recently we (or rather I, as my son has yet to embrace the heady world of savings, stocks, bonds and shares) have invested in a Minecraft Realm. What this means is that we can inhabit and play the same Minecraft virtual world together, simultaneously in real time. The scope for cooperative play is increased a hundredfold.

In reality I find my son takes great delight in engineering the most elaborate traps and ruses with which to visit upon me the many woes of Job. He has enticed me with “treasure” only to poison me, lured me into unseen holes in the ground which, if I am lucky, deposit me into lava, if I am not then I find myself literally falling through the entire digital geology of the realm and beyond until I literally “fall out of the world”. This leads inevitably to death and the loss of all the hard won resources that I had previously amassed in my gaming inventory. Most of the time this amounts to nothing more than a diamond pickaxe, a sword and a couple of pork chops but, honestly, it is a labour of Hercules to acquire these objects within the game. Or, as is his favourite wont, he has beguiled me to enter some dark corner of the world only to spawn in hundreds of malignant mobs directly behind my back so that, yet again, death is the inevitable conclusion to my gaming foray.

Apparently in-game “experience points” are of tangible value in Minecraft and he insists that he is helping me to acquire as many of them as possible by these remarkably well-orchestrated set-pieces. He plainly has an answer for everything.

Hence all my noble intentions of steering him onto the path of gaming righteousness and adopting a set of virtual Queensbury rules have gone out of the window. In all honesty all I am successfully teaching him at the moment is how to conduct non-violent protests and how to complain in a semi-reasonable but insistently demanding voice.

I am considering trying to wean him off virtual gameplay and teach him (real) chess instead but, given recent experiences, the thought of having an actual tactile object in my hands is probably not a good idea.

I think it was Bruce Lee who posited the theory that absolutely anything can be used as a weapon… Sadly intelligence does not seem to be working for me.

In every human is the soul of a recalcitrant chimpanzee. But in this case, I think your boy was just trying to toughen you up. There's not much point having a weedy old pop who can't protect you when the chips are down.

Gorilla Bananas: that makes me feel a helluva lot better. He's training me up to cope with life's muggers, poisoners and other ne'er-do-wells. Now if only I could do the same for him...

An Alan Sugar in the making?

You must be so proud.

Barry: a young Nick Hewer would make me prouder.

I bet your son is loving it.

My dad's a control freak. Even though he never had video games growing up he would still criticise me while he watched me play when I was a kid. It didn't really bother me. It was kind of hilarious. One time he took me to an interactive video game museum. We played pong, the only game he could play, due to him lacking the necessary muscle memory for using a controller.

I beat him and it was amazing.

Fredulous Yo: he is indeed enjoying it and, if I'm honest, he's teaching me far more than I'm teaching him.

You haven't mentioned any laughter as his game plan is realised at your character's expense. My child always laughs when I'm slain or otherwise beaten by her in these sorts of things, something I suppose should be taken as comforting rather than disturbing. But anyway, I'm not sure in this circumstance if it's better or worse that he laughs evilly as he rallies his mobs. All I know is, you've (finally) explained to me more about how Minecraft works so I can at least partially understand my daughter and her obsession with it as well.

Being Me: the worst thing is that I have become obsessed with it myself to the point where I have uploaded worlds / maps I have made here: http://www.minecraftworldmap.com/users/silsetto

REVENGE. That is all I have to say

Nota Bene: that's what we take all those baby photos for, right?

At least he is being imaginative in his plotting. No two deaths the same eh ?

Keith: variety is the spice... etc.