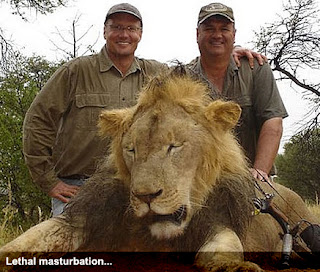 Social media has always been vaunted as the means to connect us all. To turn the whole world into one vast social network where we can all revel in the unalloyed joys of immediate interconnectedness. Barriers will come down. Boundaries and borders will come to be meaningless, etc.

And I’m sure that’s true in part and I’m all for it but there’s another side to social media that is making me extremely uncomfortable of late. The global kangaroo court culture that seems to be springing up. Nearly always fired up and stoked by traditional media outlets – newspapers and magazine articles – and usually targetted at sad individuals who have not merely broken some social taboo but – worst crime of all – have been caught and publically identified as doing so.

The killer of Cecil the Zimbabwean lion is a case in point.

Now let me make it clear that I abhore “sport” or “trophy” hunting. Of any kind. I don’t care whether you’re some Southern red neck who feels shooting bears is a tradional part of your culture / your right as an American to bear arms (or arm bears or shoot bears with arms) or if you’re a South African poacher whose sole earning potential relies on you supplying misguided Chinese doctors with rhino horn and tiger bone. Killing animals for no good reason at all is worse than criminal. Killing them at the behest of market forces is deplorable. Killing them for “the thrill” or for a misguided sense of “sporting achievement” is completely despicable. I don’t buy all this BS about the beauty and the skill of the hunt, etc. The thrill is sexual at some base level; some ego stroking catharsis that sees the testosterone driven huntsman masturbate live rounds into the flesh of some exquisite beast that he cannot otherwise tame, own or match.

I don’t much care for the apology that Cecil’s killer has offered to the world either; “he was sorry that he killed that particular lion”. As if all the other animals he and his kind have killed were somehow more morally palatable because they were not named or had not been adopted as some nationalist symbol. He is very sorry, I’m sure, that that particular lion’s death came endowed with so much media exposure and so many, many column inches. He killed a lion but has wounded himself. Badly.

But do we want the wound to be fatal?

See, I’m uncomfortable with the howling of the mob. The digital stoning that the hunter dentist is receiving. The screams of outrage. The death threats that have seen this man have to go into hiding, have to close down his business. While many people I am sure feel he does not deserve pity or mercy I, however, do not want to be party to a global culture that drops the equivalent of an atomic bomb of vitriol onto one single individual – as if we are, all of us, unimpeachable in our moral rectitude, as if we are all so righteous in our social standing that we have the right to dispense condemnation and judgement and to recommend lethal injection to those who offend us.

All from the comfort of our armchairs, inbetween surfing for pictures of Lady Ga-Ga / Justin Bieber and sharing the lastest meme about funny kittens on Facebook.

I felt the same when that poor science dude got publically excoriated for appearing on TV for wearing a shirt whose pattern design was made up of bikini-clad women. Sure, that does not compare to shooting a lion with a crossbow and letting it bleed to death for 40 hours but the howls of public outrage and indignation were much the same. The world spoke with one voice – one vast unthinking, rage-filled, knee-jerk propelled voice – and that voice was without mercy or consideration or humanity.

Lord knows we all have days when we feel like the entire world is against us… but social media can now make that proposition a very grim reality.

We all mess up now and again. Sometimes we spend vast tracts of our lives believing the wrong thing entirely until life or the universe or the deity of your choice sets us back onto the right track.

But imagine if we were condemned for it via social media, the newspapers, neon flashing lights, petitions, protest marches, movies, fatwas, campaigns, death threats, the mob outside our homes hefting huge rocks and baying for blood…

How can it be that social media makes a demand of us that we are all morally and irreproachably perfect on the one hand, but so easily turns us all into a blood-thirsty, vengeful mob on the other?

If these people want to hunt lions they should do it like the Maasai, on foot with a spear in hand. The long gone days when humans feared getting eaten as much they yearned to make a kill...those were the golden days. Have you ever been confronted by a creature that wants to eat you? You don't know what you're missing if you haven't.

Gorilla Bananas: I've had dreams involving Keeley Hawes that actually run along those lines... but they don't really count, do they?

It's a bit like long distance warfare, isn't it? You can send your drones in happily aware that you can't be touched.

The fly in the web: it's exactly that... and as a consequence people are also removing themselves from responsibility for what they say and the effect it has and I don't agree with that at all.

Couldn't agree more, Steve. Which is a good job for you, because if I'd disagreed, I would have told all my friends on facebook what an idiot you were and publicly shamed you for your despicable attitude.

I will, however, correct your spelling of despicable while I'm here. Do that again, and I'll post those photos of you in the Nigella bikini shirt for all to see.

Rol: you assured me those photos were for your own "private" enjoyment...!

My only thought is that this involving a privileged American, will add fire to the incediary mix of hate of the West and fundamentalism.

But I am amazed at the crassness and blind stupidity of many in the USA. Killing dying species is not clever. It's not even Facebook worthy.

If I were an American paying health insurance I'd be concerned that my charges were helping ISIS to inflame hatred for the West.

Put him, the other medic and the woman that killed a giraffe (not exactly raptor class) in a pit with Russell Crowe and let them crap themselves silly.

Barry: now that would be a sporting event that I would pay to watch.

John: that warning works for Minecraft as well.

Yes. People need to take it easy. Lighten up. Have some fun.

Not everything is a reason to get all riled up, which seems to be everyone's main goal from "the internets" these days.

Kenneth: yes, the internet is fast becoming the realm of haters... hope that isn't a reflection of human emotional development at large.

Nota Bene: somebody needs to be...!