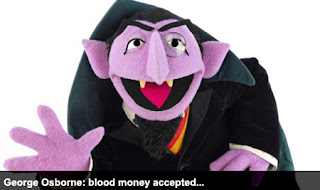 History will record that George Osborne’s main career aspiration was to become a fifth-rate, Walter-the-Softie version of Joseph Stalin.

In the geographical absence of gulags and salt mines and being too media savvy to machine gun en masse an entire social class of dissenters (just imagine the Twitter-hate he’d get for that), George’s solution is turn the rights of the modern working man against him; to subvert the last gasping vestiges of the Welfare State and choke the last breath of life out of any human rights declaration of the last 200 years in order to return us all to the dark glories of the workhouse and a more bizarre rule of lassaiz-fare... where people are encouraged to fend for themselves without government assistance but with the government still wanting to take a good cut of the profit.

Not satisfied with pushing the retirement age back a couple of years (and undoubtedly it will get pushed back even further until aged 98 I will have to resort to selling my own body on street corners just to be able to afford a cheap moussaka from Lidl), there are now plans afoot to dispense with the old system of employers providing sick pay for their employees.

The idea being floated by George "Uncle Joe" Osborne (the Chancellor Palpatine of the Exchequer) is that worker's themselves should provide provision for their own sick pay out of the wages they earn.

Speaking as someone who at the moment can't even afford to pay pension contributions towards financing my old age ("don't worry," says George, "you've got at least another 80 years working life ahead of you - plenty of time to save for a retirement you'll never reach") I can tell you now that if deductions were forcibly being made out of my earnings in lieu of potential future sick pay awards I would simply not be able to afford to live and therefore going to work in the first place would become a pointless endeavour. Going to work would only remain viable were I never ever to become sick. Or to be exact, were I never ever to take a sick day even though I might genuinely be exploding with typhoid or - in the dystopian Victorianesque future that George is undoubtedly masturbating over - smallpox.

Essentially, my simple theory posits that the Tories are trying to kill us all. By "us" I do, of course, mean just the non-wealthy workers who don't have enough money in their Government bailed-out bank accounts to successfully lobby their favourite political party to adequately represent their own singularly selfish viewpoint over those of the moral majority.

The modus operandi of our murder is simple. Worked to death with longer hours 7 days a week, taxed to the hilt to pay for the privileges of the rich, sick pay only if you can afford to make the contributions, no sick pay at all if you can't, work work work until you drop or until you get your "congratulations on your first centenary" letter from HM The Queen (whichever comes first). Thus huge saving are made - no sick pay and no pensions payments made because I guarantee that should anyone actually make it to a pensionable age they'll be so worn out and exhausted by 80 years' hard labour they'll be dead before the first e-payment is made into their bank account. The 7 ages of man will be truncated to: baby, child, man, workhorse and fertilizer.

And who will benefit from all these savings?

The poor? The repressed?

According to the Tory worldview they do not exist. Instead the country is full of fat, lazy, ne'er-do-wells who are only in dire straits because an over-indulgent government hasn't done enough to encourage them to stand up on their own two feet and make their own way in the world.

In other words, we're back to the old "spare the rod, spoil the child" guff which has always been used in ages past to justify naked callousness and simple cold-heartedness.

Which when you are trying to hold down three jobs to put food on the table for children whose whereabouts and welfare you can't monitor anymore because you're always at work trying to pay for the sick pay you daren't take is not what you want to hear from some over-privileged buffoon in a suit whose idea of poverty a few years back was having to include the mortgage for his paddock on his taxpayer funded expenses...


I'm afraid George may be the one murdered the way he is going on.

wilsonx54: now that funeral I will gladly stump up for...

Instead the country is full of fat, lazy, ne'er-do-wells who are only in dire straits because an over-indulgent government hasn't done enough to encourage them to stand up on their own two feet and make their own way in the world.

Indeed it is...which is why the government propose to help them even more...bankers, directors of companies battening on to the health service, education, transport, buy to letters.... with the aim of setting them on their own two feet and cutting the feet from the rest of us.

The fly in the web: yes, the thought did occur as I wrote that line that the greedy layabouts sucking on the teat are the rich and the effete corporate loving soulless vampires that plague the business and political spheres and ensure that fair-play remains nothing but an unobtainable and seemingly childish dream...

LCM: the queue starts here but don't worry. Your name's on the VIP list.

Or as Kenneth Williams said "Infamy, infamy, they've all got it in for me!"

I'll have to get you a financial advisor. He'll tell you to get a second job as a minstrel with a lute. I bet you can carry a tune as well as Bernard Cribbins!

Gorilla Banana: I can carry anything if the bucket is big enough.

When i am old...i will have no moneyand i shall go to the workhouse

John Gray: the way things are going we won't be able to afford the workhouse...

I had to wait a few days for the screen on my PC to cool down.

Barry: they cannot yet arrest us for our dreams...

Or can they? Maybe they'll just tax us on them instead?

Have already posted my vote for 2020 election...put a cross by Mr Corbyn's name. What has happened since this year's election is beyond belief and quite sickening

Nota Bene: certainly sickening but not beyond belief... I remember well the Thatcher years. We ain't seen nothing yet, I am sure.

Admirable understanding I must say.
George follows others ideas, just like his hero Thatcher. He has none of his own.

Adullamite: agreed. The world is being run and ruined by pale reflections.