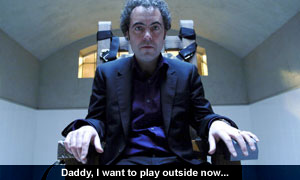 Forgive the lack of recent posts – I’ve been up to my eyeballs in work (still finishing off the chauffeur car web site as well as holding down my day job) plus Karen and I also spent Saturday visiting her mother in Cookham. Unfortunately a “nice day visiting granny” tends to be a case of walking on eggshells because she’s so cantankerous and foul tempered. It’s not my intention to go into detail about it here as it wouldn’t be fair but suffice to say she suffers from a genetic illness whose symptoms and treatment only augment her natural disposition to be argumentative.

Hence Karen, the boy and I spent the entire day treading gingerly and bracing ourselves for explosions of irrational belligerence and unjustified antagonism. We all survived but the upshot is we all ended up feeling totally exhausted and wiped out. And it takes us all several days to recover. It’s like having your life momentarily taken over by a bad vibe.

Which is a shame because “visiting granny” should never be like that and Karen and I both feel that the boy misses out by not having a traditional, warm, ever-patient granny to indulge him.

Onto other things. The weekend was redeemed a little for Karen and I by an excellent episode of Jekyll. Nesbitt’s portrayal of both Dr. Jackman/Jekyll and Billy/Mr Hyde gets better and better. The pacing of the episode was first class and beautifully plotted to keep the build up of tension at excruciating levels. Expectations were constantly created, played around with and undercut. It created a relentless pressure-cooker effect and gave me stomach cramps. But hey – maybe I’d just overeaten?

Best of all Benjamin (alias Paterson Joseph) got gorily dispatched about three quarters of the way through. A quick flick of a knife and he’s spewing claret from the second mouth that Mr Hyde has opened up halfway down his throat. Nice. Anything that permanently halts that fake American grin is fine by me.

Nesbitt’s Hyde teeters just on the right side of comic, i.e. blackly humorous but not ridiculous. His grin reminds me of the shark from Finding Nemo which is probably an odd reference point to make but what the hell. There is something likable about Hyde. You want him to win. But you also want Dr Jackman to survive too. With the two being mutually exclusive it’s going to be an interesting final three episodes.

Talking of which... the BBC programming schedule throws a spanner into the works yet again. Jekyll has built itself up to fever pitch, the momentum has been primed and teased to perfection by Steven Moffat’s writing... and the BBC pull the episode of Jekyll next week in favour of the Live Earth music concert. And everything deflates... pzzzzzzzsssst!

Yeah yeah. I’m sure it’s for a good cause. Saving planet earth and all that.

It's good that you haven't given up on granny. My English teacher's mom has Alzheimer's, and it makes her say hurtful and untrue stuff. We've to keep in mind that this person we see now isn't who they are - it's the disease talking :-)

My ten-year-old nephew's Granny (my Mum in other words) is ever-patient! But, it's questionable whether or not a child deserves such kindness when they throw the extra present of a beautiful coat across the room because it hasn't got a hood or his blessed sonic screwdriver on the floor because he's broken it within an hour of opening or has a tantrum because he's left his newly-purchased Kaiser Chiefs CD on the bus!! I don't suppose he's always badly behaved but it's certainly enough to try anyone's patience!!!

I'm in agreement with you regarding this week's episode of "Jekyll". It was certainly the best written of the three so far. First believing it was Denis Lawson, then Gina Bellman, but finally turning out to be Paterson Joseph in the body bag was clever manipulation of the audience's expectations.

While we were watching, I mentioned that James Nesbitt is a bit like a British Jack Nicholson! Nesbitt's role in "The Miller's Tale", alongside Billie Piper, was not a million miles away from his current part.

And, on the subject of Billie, you may remember it was Paterson Joseph beat her playing "The Weakest Link" in the penultimate episode of the first series of new "Doctor Who" only to be exterminated a week later! I couldn't place where I'd seen him before, other than Casualty in the mid-90s, until seeing him again this week!! I must be getting old!!!

Casualty! That's where I've seen him! Thanks for that... it's been bugging me for weeks. He's got one of those everywhere faces that is hard to place. I keep confusing him with the guy who used to be in Hustle too. Not sure what it is about him - I'm usually good at placing faces - maybe he's just too bland?

You're right of course but she's been like this for the majority of her life and subjected Karen to a tough upbringing. It's hard to separate what is the disease from what is actually her nature. As TimeWarden so sagely points out: tricky things families!

Hi Steve
Sorry that it is my first visit and to comment here is kind of sad.
I went through those angry flare ups with my Dad and it is so sad. Rational today and not for another week but always my Dad. Sad for my Mother, sad for his old dog but always my Dad and tolerated and loved by me.
Just try to remember that they are the relation who they have always been and will always be and your or your family's love will always be directed to them.
Love them for their best days or the days that you can remember
Good luck

Thanks Clyde, glad you could drop by.

Hi Steve,
Have been looking on the internet about Jekyll, just finished watching the last episode, it was good, nice and twisting with a helluva ending, the boys have Hyde genes yes? or am I being thick. Sorry to hear about Karen's mum, she has my sympathy, my mother has been denying clinical depression for 20 odd years and I had to live with that. Sadly she remarried recently and has become a new person, unfortunately this new person doesnt ring me anymore and has pretty much forgotten about me, I send Reiki to you all if allowed to help strengthen your resolve and energy levels.

This is a strange world we live in and to survive is the greatest adventure.

Thanks for stopping by, Ruth - good to hear from you. I'm guessing that, yes, both boys have the Hyde genes.

Sorry to hear about your mum - parents are really difficult sometimes, aren't they?