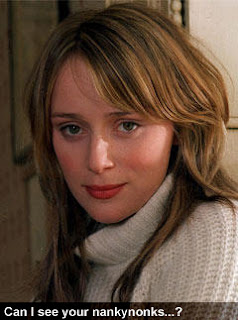 CBeebies has suddenly established a toe-hold in our house.

Tom – just a month a way from his first birthday – has developed an attention span which now makes it worthwhile to allow him a little bit of kid’s telly each day. Hence 6pm to 7pm is now officially The Bedtime Hour.

At this time we all gather round the telly and whilst simultaneously feeding Tom his tea we watch Chris Jarvis and Pui Fan Lee talk joyously about big pink milkshakes, throbbing moon rockets and furry teddy bears without a single trace of irony or even the smallest of smirks. Kid’s telly is a very serious business indeed.

Of course it is a well known fact that grown-ups have children solely to be able to watch kid’s telly without feeling embarrassed about it. Kid’s telly is feel-good safe telly and it puts everyone in a good mood regardless of their age. If I was being charitable I’d say that this effect was achieved simply by the fact that the stories and jolly cartoons carry us back to an age of unsullied innocence where worries about rising mortgages, soaring food prices and the police finding that body under the patio were things totally inconceivable to our young unformed minds... but the reality is that we enjoy watching kid’s telly just so we can take the P out of the hapless presenters as they caper about pretending to ride invisible mopeds or have fairy cake tea parties with an assortment of plastic charity shop toys. Oh how their mates must rip the hell out of them in the pub later...

Of course the fact these people are on about 35K a year means that they have the last laugh but as they are endlessly chuckling and laughing anyway who’s ever going to tell the difference?

One of the best things about kid’s telly though is the occasional celeb they draft in to read the stories or narrate the animations. I’m currently marvelling at the theatrical gravitas that Derek Jacobi manages to bring to his voice-over work on In The Night Garden... phrases like “Here comes the nankynonk” and “Oh no, Iggle-piggle has spilt his nonky-juice” (I kid you not) are delivered with such earnest aplomb they could have been written by Shakespeare. Or “Shacker-nacker” as he would undoubtedly be called in the show.

Best of all though is that this week Keeley Hawes is reading the bedtime story.

I feel a shiver of excitement run up my... er... back every time she turns her liquid eyes to the camera and croons “And now it’s time to go to bed...”

have children solely to be able to watch kid’s telly without feeling embarrassed about it
I beg to disagree. Or maybe you have better shows in the UK. I have occasionally watched Blues Clues and Bear in the Big Blue house and did not enjoy one minute of it.

I must admit I do think us Brits do class kid's TV but even so... I recall catching the occasional episode of Big Blue House when Ben was still a toddler and didn't mind it at all... all rather cosy and whimsical. Much better than Barney The Dinosaur and Friends which was met with howls of derision from all and sundry. There's something deeply unsavoury and very very wrong about Barney...

Is it time for the naughty stool yet?

Yes I'll second that Andrew. And add Sarah Greene to the list.

Hey, the mums are the main beneficiaries of CBeebies bedtime story - my wife was positively agog when that blonde bloke from Spooks was the storyteller for a week!

Hmm. Keeley also used to be in Spooks... This is very suspicious, Tris. Do you think MI5 are using CBeebies as part of some spy recruitment campaign?

Could be. That may explain why Stan's new toddler bed converts into a submarine...

i have to agree with emma on this one...and i have seen your kid's tv shows steve on visits there...i do however miss captain kangaroo and mr. green jeans :)

Tris: nice - does it have the periscope and everything? Mothercare has really come on these days.

Hi Daisy, seems like I'm the only one that enjoys kid's TV. Maybe that says more about me than other people?!

You're on your own here Steve. I may like makeover shows, but even I have limits, much though the Derek Jacobi reading sounds worth a look!

I know Laura. I thought I was flying my flag in unison with everybody else but it seems I was wrong. I am the only adult who likes watching kids telly.

Great. My only competition for Keeley is a million or so kids who can't speak and are incontinent. I'm in with a chance!

You really do have a one-track mind.

I know. And I polish it regularly.

Oh Keeley! She was in something I watched the other day - can't think what as I only watched it to stare at her - but she had gone blonde and wasn't the same at all! Still stared though.

But re children's TV I have to admit I have never watched any and my poor children don't either. I let them watch Top Gear and The Gadget Show - children's TV too really! But if Keeley were in something I might watch but I suspect she would have to wear too many clothes before 9pm!

Hi Gina, I think it was something that starred Marc Warren too... on the Beeb. Missed it unfortuantely. As a diehard(er) Keeley fan I feel rather ashamed. But believe it or not I have never seen Tipping The Velvet either which, for adoring fans of Keeley is probably an absolute must-see. Hmm. I must drop a few hints to Karen now that Christmas is coming up... ;-)

I do have my favourites....Charlie and Lola being one of them. Sometimes when my children are with away with their Dad i switch on the tv and it has been left on one of the many children's channels. What probably is embarrassing is the amount of time it takes me to realise i am sat watching something designed for 5 year olds.

I'm sure Karen won't mind me telling you this but she loves Charlie and Lola too - so much so I bought her the boxed set of DVDs for her birthday last year. It's one of the few programmes made for really young children which actually has elements for adults within it too.

I can't believe the little 'un is almost a year old!

I know, Nora, nor can I. This year has flown by so quickly. He's really developing fast now that he's started nursery too!

"Big pink milkshakes" and "throbbing moon rockets"? Actually it's an open secret that presenter Chris Jarvis is gay. Perhaps he wrote the script? Nice chance for him to slot in (so to speak) some double entendres?

Might have known you'd enjoy Keeley doing some bedtime reading!

I have to say that Chris always looks like he's genuinely happy to be doing what he's doing... whereas with Pui I occasionally catch a look of "oh God I can't believe I'm doing this." Chris looks totally "gone" with it so maybe you're right. They're his own scripts and he's living the big moon rocket dream. Have to say as kid's presenters go I much prefer Chris to Andi "Annoying" Peters (laughed like a drain when he lost Celebrity Master Chef).

We also love Charlie and Lola but our favourite show has to be THE HOOBS!
GROOVE(the green Hoob)is the Master of innuendo.
Fun for all the family!

Never seen the Hoobs but anything that contains gratuitous innuendo is fine by me!

I LOVE CHRIS JARVIS!!!!
AND i'm female! lol
i'd let him "discover and do" anyday of the week :P

Alas Kerry, I suspect dear old Chris would be pretty reluctant to discover and do anything... which is no reflection on you at all! Don a moustache and builder's jacket and you might get lucky...!

Kerry - maybe you are the woman that can turn Chris Jarvis straight? All you have to do is eliminate Poi and he's all yours... how do you look in a Teletubbie costume?! ;-)

If you have genuinely watched In The Night Garden more than once in your life, then you would know it's the Ninky Nonk and not the Nanky Nonk or whatever it is you keep calling it!