The Meaning Of Matter 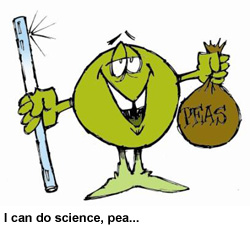 In honour of the experiments due to take place tomorrow at the CERN laboratories in Switzerland where two beams of subatomic hadrons will be blasted into each other at speeds approaching the speed of light in order to determine the true nature of matter, the universe and God Himself I too have decided to conduct my own particle acceleration experiment from my modest laboratory here in Leamington Spa.

In order to rip apart the very building blocks of existence and unravel the secrets of life at the subatomic level I shall at some point tomorrow, armed with my own homemade Large Hadron Collider (a pea shooter) be firing matter at speeds a little under the speed of light at the back of my boss’s head when he isn’t looking.

I confess that I do not know what will happen when the pea matter collides with the skull matter. I’m hoping that new particles will be created and / or liberated which will give me clues as to how the universe itself began. It is true also that a black hole may open up in the skull matter and small amounts of blood may be seen emerging from the aperture. What this will mean for the future of my own personal existence I do not know though I am certain I can guarantee the continued safety of the rest of you. Do not be afraid.

My friends, we stand upon the brink of a new dawn. A new Aeon is about to begin for all of us.

Fellow citizens of earth I salute you. Wish me luck.
Posted by Steve at Tuesday, September 09, 2008
Email ThisBlogThis!Share to TwitterShare to FacebookShare to Pinterest
Labels: life, science, universe, work

i thought about the pea shooter...er um...large hadron collider...but figured if i was going to shoot someone it would be something more noticeable...if i'm going to jail, i need to get something positive from it!

That's a good point, Daisy. Maybe it's time to draw up a more ambitious hit-list (all in the name of science, of course)...!

So when we're not here on Thursday morning, I'll have you to blame. Great.

Between Wednesday and Thursday hangs a day so dark...be sure to wear a white coat Steve, for credibility.

Don't worry Rol, I'll be sure to give you a namecheck when it all goes tits up.

Daisy, you can justify anything with quantum mechanics. Or so I've been reliably informed by a Channel Five documentary...

Brother T, I have a white jacket whose sleeves buckle up tightly at the back... does that count?

I think I know what you mean TimeWarden... a big bang that results in an almighty explosion of life and vitality... Hmm. Dare I say it? Dare I say it?

Big Bonk Theory has been born!

If we don't make it to Thursday, so long, and thanks for all the fish.

Inchy, I'm trying to think of something funny to say about Level 42 but Level 42 were never funny. I always hated Mark King. The black hole can have him and his ruddy bass with pleasure.

good luck sir! I will try the experiment Stateside, firing hard peas at Sarah Palin's skull! (can you tell I don't like her??)

I'm picking up a few hints of dissatisfaction, yes, Emma... might I suggest peas with a full metal jacket fired from a high velocity pea shooter with laser sights?

Perhaps CERN might be interested in THE PEA THEORY experiment!
I however would love to see EMMAK perform her version of the experiment as I too 'dislike'(what a polite word for my feelings regarding !!!!)THE BARRACUDA.

Ally, I can see I'm going to need a whole shooting range... if we don't know how the universe began after the mass shoot out nobody will care!

And it all passed by without anything happening. Well, the sun came out here and there was a fight between parents in the playground but I'm not sure those were directly related. It didn't involve pea shooters anyway.

I am not too hot at pea shooting but I am a crack shot with elastic bands.

Glad to hear you survived, Gina - and just as glad to say that existence seems to have continued where I am too! No ill efects so far aside from a headcold on the way. Ah elastic bands. The weapon of choice for any domestic / schoolyard spat. I can remove the gonads from a gnat with an elastic band. In fact... that may well be my next experiment...

I must admit, I'm a trifle disappointed. I loved Stargate.

Yeah, I'm feeling a bit deflated too. Work as usual tomorrow then I suppose... *sigh*

Pea shooter shooting death rays at pea brain - that could work I guess.

Mind you, you might not, afterwards - ever work in Leamington Spa again!

Would that be a bad thing I ask myself...!

REPENT! REPENT FOR THE END OF THE WORLD IS NIGH! AND I SAY TO THEE, IN THAT HOUR WHAT SHALL WORLDLY GOODS AVAIL YE????? Please send the contents of your bank accounts to : Mrs Lucy Fishwife, The Old Fish-Smokery, Chiswick, London.

You'll never get into the Kingdom of Heaven that way, Lucy dear... rich men, camels and needle eyes and all that. Far safer if I keep my horde of cash and ill gotten gains for myself thus saving your soul and you from yourself... ;-)