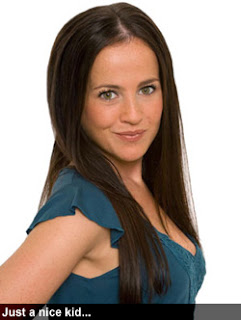 I can't say that Big Brother has at all gripped me this year but with Karen wanting to watch the occasional episode it's been near impossible not to get a little bit sucked in...

This season had been remarkably unnoteworthy apart from the following:

The Good Points:
1) Rachel Rice is the winner. I'm genuinely pleased that for once an ordinary, decent, pleasant, nice, unaffected kid without any bizarre idiosyncrasies has won the show. Let's hear it for normalcy!

The Bad Points:
1) Rex: the man is a nasty, bullying, smug, control freak. When he came out he looked like Bryan Adams dressed as Freddie Mercury. The only good line he ever came out with was "I'd swap you for Scrabble." However as it was directed at the lovely Rachel he loses any kudos points that he might have accrued.

2) Mikey's voice: he sounded like an dying elephant trying to fart a speculum sideways out of its prolapsed anus. Sorry for the grossness but I just couldnae tek nae more!

The Worst Point Of All:
1) Mario's tea-based sexual innuendo directed toward his partner, Lisa. "I'm just dipping this custard cream into this cup of hot... juicy tea..." Oh please! Somebody should have pointed out to him that his custard cream didn't even touch the sides...

steve...i am busy watching our version here at the moment...i don't usually like that type of thing but my friend's daughter has me intrigued...long story...lots of text's!

I'm a real hypocrite, Daisy, outwardly (and indeed inwardly) I loathe these types of reality shows... and yet it doesn't take much to get me sucked in and "involved". I think we all have a need to find people who are worse off than ourselves personality-wise so that we can feel smug and superior. Well. At least I do and BB has me feeling more smug and more superior than any other show on earth. Apart from watching George W Bush deliver another sparkling bit of oratory... ;-)

omg i so know how you feel...i keep watching and thinking they are idiots...gives me some superiority in at least one part of my life!

I watched no big brother this year, I'm not really a fan. Having said that, for someone who watches endless repeats of FRIENDS I think I am in NO position whatsoever to comment on anyone else's TV habits!

Hi Steve, I try hard not to watch these types of shows and so far haven't EVER seen a BB show at all. Am, I missing out on something? I think not. Lab-rat TV. I watched our Sunday Night drama last night and enjoyed that so much I might even blog about it! Ray Winstone - he might even be my new crush!(Sorry Mr Hannah)

Merms, Friends has many benefits over BB. Mainly that it is only half an hour long and only on once a week.

Amanda, it is not so much lab-rat TV as bunny-rabbits-with-shampoo-being-poured-into-their-eyes-TV. Only thing is the bunny rabbits are nasty and rabid and you want them to be in pain. And then boiled in a big saucepan by Glenn Close afterwards.

As for Ray. He's the man. A real man's man. Though it's ok that you like him too.

steve...just watched last night...i should be on that show...i could kick ass! better yet, they should have a usa/uk version and we could both be on it...the manipulations we could pull would be fantastic! btw i can cry on a dime if i pinch myself hard enough...would make for a great play i am thinking...lol

I think they should have a Poets' BB.

But they never would - far too violent!

Mind you we could always have a bloggers' version - you could be our resident double-entredre man Steve!

Daisy, I'd cry if you pinched me hard enough but I'm more up for being moody and recalcitrant and hogging the bathroom! Is that realy great television? Hmm. You bet! ;-)

Laura - wow, two recommendations that I take part in BB. Nor sure I'm exactly honoured... but being an official double entendre man would be great. It would make me swell with pride. Oo-er?

Hello! Just popped in to visit! I have watched a few of this session of BB on account of having someone living with me at the moment who does.....but its the first series I have watched at all. I don't actually like it, and I don't actually watch much tv....mostly because I could get SOOOOOO sucked in if I did! The awful fascination of it all........

Like you I hardly saw any of the current (just finished) series, Steve. This year's bunch of "celebs" just didn't draw me in. I don't even know what Rachel was like but from the little I saw of her she seemed okay enough, so a worthy winner then I guess. But I think the BB balloon has burst and is rapidly shrivelling away like a flacid .... you know. Time to lay it to rest?

Remember the days of Celeb BB and our many posts on Leo Sayer's pants and Jade's monstrous rants? Aaaah such times!

I've never watched BB (there's a surprise eh!) and don't think I ever will.

But Laura's suggestion of a blogger big brother sounds rather fun. I'd watch that if they were people I "knew". I couldn't take part though cos I would kill anyone at all if I were stuck in a house with them for more than 6 hours.

The girl who won looks a nice lass anyway.

Thanks for popping by JustMe... and you're right about the mesmeric powers of TV. Maybe it has truly become the idiot box that people feared it would be?

OC, I think BB is very flaccid and limp these days and rather bent to one side Carry On Style. Poor Davina. As much as I like her she needs to find some other vehicle methinks. And weirdly I was only reminiscing about the good ol' days of Leo Sayer the other day... back in the days when I gave half a shit for BB. Now I just pass the occasional fart... but I'm taking tablets for that.

She's a very nice lass, RB but I suspect she'll disappear without trace quicker than previous winners simply because she's so ordianry... there's no hook as it were to hang the nation's fascination on. Even so. I'm pleased she won compared to the boot camp rejects she shared the house with. Like you, I just know I could not cope with a BB scenario. I'd become very depressed very quickly and then homicidal tendancies would take over. I suspect it would make terrific telly...!

I inevitably got drawn into it, and agree that Rachel (who did not even mention her childhood film roles), deserved the win, especially over the boorish, narcissistic Rex.

Auden wrote, 'Private faces in public places are wiser and nicer than public faces in private places', and there is truth in this; one seldom has the chance to observe people at length; Big Brother allows one to do this, and is it very revealing. A bit like the human equivalent of bird-watching. The programme nurtures the destructive thesis that it is better to be entertaining than pleasant, whatever the cost. It is faintly encouraging to find that even the strange people who take part in the phone votes can still buck that media message.
(I understand Mario's real name is Sean, but that he changed it to 'suit his image'. Call me Clint, but what a wazzer!)

"The programme nurtures the destructive thesis that it is better to be entertaining than pleasant, whatever the cost." Spot on. Wish I'd come out with that.

As for Mario... did he used to have a big bristley moustache and wear dungarees?

Sadly this years Big Brother held no
interest for me whatsoever!
I am saddened.....does this mean I am officially old?

No Ally, it means you're discerning and possibly have the forethought and energy to turn the TV channel over! I think I only watch now to see Davina gurn and wear yet another black dress.

I do like Big Bro and I'm a huge reality TV fan, but they just mess with the format too much and it's waaaay too long. At week 10, I could no longer stomach Mo just sitting there, Rex's annoying voice, Rachel's 'bubbliness', Kat's craziness, Darnell's unbelievable self-pity and the final straw was the awful Nicole. What happened to 10 contestants, 10 weeks? It's not rocket science.

I'm sort of glad Rachel won, but she didn't exactly do anything. She's Cameron Mark Two I think, and we'll look back on her and shudder.

Rex was okay...sort of. I couldn't believe in the final they edited his best bits to make him look like a total twat. I mean, he was a bit of a twat, but they made him look like Public Twat Number One for things like him defacing Jen's painting - and I was completely on his side in that whole incident (spitgate).

Worst bit of the series for me? Luke. Ooh I want to punch that boy.

Hi Mart, I totally agree - shorter would definitely be sweeter. I liked Rex initially - I found his unremitting honesty refreshing but then I quickly sussed that actually he uses the "honesty" card to justify his own selfish obnoxiousness. He's not a nice boy at all. I'm sure he'll do very well in life though. As for Luke... God yes. Hit him please. Did he have a lisp of some kind? Every time he said Rebecca's name it seemed to come out as "Webecca"...