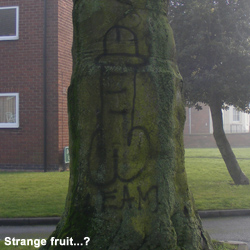 This newest of Leamington landmarks appeared, proud and ready erect, sometime in the run-up to Christmas.

One morning the tree was inoffensively asexual and passive and the next it was unmistakably male and “up for it”.

The worst thing about this most unimaginative bit of graffito is that it lies (stands?) smack bang in the middle of my route home from work and is absolutely unavoidable unless I take a detour of several hundred miles (a bit of an exaggeration) in order to avoid the accusing stare of it’s malicious helmet.

When you are on foot after an exhausting day at work such a detour is, quite frankly, unpalatable and so I inevitably run the gamut of the helmet and find myself tutting at it every single time.

Lord knows I’ve tried to see the funny side. I mean graffiti can be entertaining. Even educational when it’s produced by someone with a brain cell that can rub its shoulder up against another one.

Maybe this graffito is an emblem of an all male secret society that I have patently not been invited to join that celebrates the leaping vitality of the male member in various (inevitably) homo-erotic rites that would, to quote Morrissey, make Caligula blush? They meet by night, swigging bottles of Diamond White and cans of Special Brew, and there by the light of the full moon they sing carousing songs of maleness, pledge allegiance to Old One Eye and prove their devotion to the cause by dropping their hoodies to reveal their... er... hoodies...

Sadly I suspect not.

Sadly I suspect the real story is that a rival gang from one of Leamington’s neighbouring towns – Warwick or Kenilworth perhaps – decided to make a foray into enemy territory late one night and tarnish the reputation of us resident Leamingtonians by implying, pictorially, that we are all great big nobs. Let’s face it, it could even be the handiwork of a disenchanted and disenfranchised local boy who, tired with his lot, tired with the fact that his own town refuses to see his celebrity potential and burgeoning star quality decided to hurl his overlooked artistry into the cold, uncaring faces of all those who lived and worked around him before hurling himself, aerosol can in hand, onto the train tracks at the back of Flavel’s factory, there to be squished under the locomotive wheels of the 9.25 to Dorridge.

This penis could be his final testament. His last will and willy to the world.

Oh who am I kidding?

It’s just no-good, scruffy, bored kids isn’t it? They’ve disfigured what was a very beautiful tree just for the sheer hell of it and I have to look at the damned thing every time I go home from here to sodding eternity and there is nothing that can be done about it – no cleaning agents that can remove it without damaging the tree, no way of eradicating the graffiti short of felling it’s living host. Curse them. Curse them and their amoral can of plebeian aerosol paint!

haha you are funny!

It just needs a condom or a willy warmer really doesn't it? A little something to cover it up. I'm sure someone could design such a thing. I suspect conventional models you can buy in the shops might not fit too well around the exceptional girth.

Hmm, your right Gina... and let's face it, rubber trees are quite commonplace now, aren't they?

Mind you. That's one serious bit of "wood" (fnarr fnarr!).

It is indeed Mr Clearbrook... but you should see it glistening with morning dew... (oo-er!)

I agree, Sweet Cheeks, despite all the jokiness above my first reaction was one of fury. It's bad enough to see buildings or objects disfigured with graffiti but something as beautiful and alive as a tree...? I'd like to see the culprits horsewhipped and then tattooed with their shame (and I'm a bleeding heart liberal).

It would be relatively easy to grow some ivy or something up the tree to cover it.

It isn't nice. I do like to see all those old carvings in trees - where people carved their names 50 or more years ago and things. I spend ages sometimes reading old oaks. "Ethel and Cyril together forever 1933" that sort of thing.

It seems peculiarly tasteless; like spraying graffiti on a horse. I hope it drops a branch on the artist one night. Their final bough, so to speak.

Gina, my wife reassured me this morning that "rain and lichen" would soon sort it out... just got to be patient, I guess!

Agreed, Brother T, and I hope all their endeavours come to nought (forever barking up the wrong tree)... ;-)

Andrew, I suppose if they'd drawn it on a weeping willow nature would have supplied the effect herself...!

It's strange, is it not, that women, even rather sad unwomanly women, don't feel the need to draw strange images of their vag on poor unsuspecting inanimate objects. It seems to be a peculiarly male phenomenon.

Meva, good point well made (unlike the graffiti).

Let's hope no one starts hanging used condoms from its branches. Or spots the image of the virgin mary under the helmet before someone can paint a tree over it again!

Laura, I fear the Virgin Mary would be hard pressed to find like-minded people in Leamington Spa...!

It's more the effect it will have on the Innocent Young... face it, a depiction that size will scar any young boy for life. I remember a friend of mine whose kids were just learning to read, wheeling the pushchair past a public loo and one of them asking her "Mummy, what does IN ERE FOR ONE UP YER BUM mean?"

Indeed Laura, as a young boy a "good time" meant an afternoon at the swings or playing with a bumper box of Lego... imagine my surprise then when I rang the phone number I found on the wall of the gent's toilets in the park...