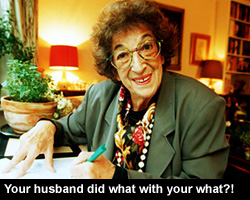 Misssy M highlighted a delightful jape on her blog this week; seems some smartarse prankster wrote a letter to The Guardian’s resident agony aunt, Mariella Frostrup, that was basically the plotline to the film Little Children. Most amusing of all the cigarette-butt gargling Mariella didn’t pick up on it and replied in earnest.

Of course, being a caring sharing kind of blogging community ever waiting in the wings to pounce on someone’s gullibility to increase our own internet profile the idea was muted that as many blogger’s as possible write in to Mariella in a similar vein – choosing our own favourite films as source material – and thus stretching Mariella’s sandpaper voiced advice to the absolute limit.

Sounds far too cruel a prank to pass up. So here are a couple of humble offerings from me:

I was raised by my aunt and uncle on a farm and never knew my father. They always told me he was dead and didn’t want to talk about him. Since their death a while ago I have been struggling to make my own way in the world. I thought I was doing OK but then the fates conspired to bring me into contact with a man who claimed to be my father! There are various proofs which seem to validate his claim. My life is now in turmoil as he has revealed I also have a twin sister. I have met her a couple of times now and if not for the family connection I’d think she was pretty hot. My dilemma is this: my father seems to be involved with a very bad organization indeed and I know they are doing a lot of bad things to a lot of people. He keeps asking me to join him and take over the company. He is very forceful in his argument. It is all I can do to resist him. We have fought about it a few times now and I have been lucky to escape relatively in one piece. He is now very angry with me and says if I won’t join his firm he will force my twin sister to do so in my stead. What should I do? I love him and want him to walk away from this organization but he just says it is too late for him. How can I save him and save my sister?

Yours in desperate need of help,
L. Skywalker.

I’ve lived a very sheltered life and have long looked up to my very old uncle and his friend, G. They have been mainstays in my life for a long time. Last week my uncle announced he was leaving and with barely a goodbye he just disappeared from the community. I was very upset by this. He is very old and I worry I won’t ever see him again. As a parting present he left me a family heirloom – an old ring. It means a lot to me because I know how precious it was to my uncle. It is now, for obvious reasons, very precious to me. However, my uncle’s friend, G, who is a very clever fellow and knows lots of amazing things – he’s quite a wizard sort of guy – says he has discovered the ring really belongs to someone else, someone who is not very nice, and it’s rather dangerous me having it. He has suggested I take it a long way away and get rid of it. He doesn’t usually lie or make-up stories so I believe him. But the ring is very beautiful and makes me feel special. When I wear it I feel like I could do anything at all. It is also my last link with my dear old uncle and I don’t want to ever be without it. But I don’t want to upset G either (though sometimes I think he just wants the ring for himself). What should I do? Should I keep the ring or should I do as G suggests and get rid of it? He’s a very wise man and says the ring will bring me and my friends nothing but bad juju if I don’t get rid of it.

P.S. I suffer quite badly with verrucas – can you suggest any industrial strength creams?


Hope you enjoyed them. Do feel free to join in and think up a few of your own. Remember: Mariella is here to help.

Two absolute crackers. Dare you to actually send them in- old style- on a letter (it's what they used to do in olden times)

Misssy M: you mean with a postage stamp and everything? Oooh, go on then; you're on!

oh very well done that man! I loved the indignant comments on the one in the paper. Now go and get yourself a couple of envelopes and stamps and send them in...go on, i double dog dare you!

Heather: thank you muchly. I shall dash out in the appalling weather and purchase some stamps forthwith.

Do it! (very funny made me smile on this blustery, rainy day).
Princess Leia

Suzanne: so glad you're feeling the Force...!

Bloody marvellous. She'll never realise those are wind-ups at all.

I shall await with baited breath for you to appear in next weeks colomn.

Very Bored in Catalunya: they look pretty obvious to me but then I'm not Mariella Frostrup...! ;-)

Love these. Will have to come up with some of my own - *goes away to switch brain on*

As Mariella's agent I am seriously disappointed in your puerile sense of humour.

Mariella is a serious and very successful journalist with a long career in TV and writing. The fact that she cannot see the wood for the trees and is unable to distinguish what is truth and what is taking the piss is sadly something I can do little about.

You are forcing me to take an action I would rather avoid.

Trish: you have a switch for your brain? Lucky you; I have to jump-start mine. Before that I had a pull-string.

LCM: "I am seriously disappointed in your puerile sense of humour"... in what way? Was it not puerile enough? Were there not enough bum jokes?

Dear F Baggins
I won't beat around the bush here. Your uncle wants to get his hands on this ring right but you want to hold onto it so just tell him you've lost it and then have the ring made into a clit ring and unless there's something odd going on with your uncle he won't find it - and the upside is you'll then have it on your person making you feel all magical and your uncle won't be able to find it.
A friend

Dear Friend, thank you for your advice - what a thoroughly magic suggestion. Only thing is I don't know what a clit is. I have poking around all over Middle Earth and am yet to see one... is it anywhere near Mound Doom?

Dear Mariella: I'm old and rich but can't decide which of my three children should inherit my kingdom. Should I ask them all to tell me how much they love me and then give the job lot to the biggest creep?
Yours,
K. Lear

Oh trust Dotty to get all Shakesperean on us!

Dear F: Whatever you do don't swallow the ring to keep it in your possesion, next thing G will be digging in your bum looking for it.
Or is that the magic to which you were referring?

Dear LCM: Puerile enough for you?

Readily A Parent: heavens! The last thing I want is G digging in my bum with his magic staff...! It's been bad enough being dragged about by the Orcs.

Oh God I can't keep up with this. This is hilarious!

Vegemitevix: flattery will get you everywhere...!

Dear Mariella - I am writing from an island on which I have been left with some boys who have stolen my glasses. The atmosphere here is not good. I miss my parents. The others keep talking about killing pigs which makes me uneasy. What's more, I have assmar and also not a little diarrhoea from all the fruit. I have never been on Desert Island Discs and so can't even listen to music. Can you help?

Dear Mariella, as an agony aunt (and in general as a so-called journalist) you suck big time, but I know you're one of George Clooney's friends, so what about saving my life and introducing me to him? Mille grazie. A.

Lunarossa: if she was half the agony aunt she claims to be she'd sort that out for you no problem.

LöstJimmy: glad to have helped launch your weekend!

Thank you for making me laugh so much.

The fly in the web: always a pleasure...

Being Me: not yet but they'll go, don't worry!

Hilarious letters...I'd write you a couple of my own if I had a bit more time on my hands and wasn't so frickin' lazy (says the man who just wrote a mammoth comment on previous your Kath and Kim post).

One other thing to say: I HATE that name "Marje Proops"! It makes my skin crawl! Especially the "Proops" bit! Naff, English, weird, kind of "Carry On" sounding...

Okay, I'll just book myself in for an appointment with the shrink...

OC: I'm totallly with you on the name. Poor woman. She was never going to be a movie star with a name like that, was she?

Brilliant. Just brilliant. Do tell us if you decide to send them.

Organic Motherhood with Cool Whip: alas, I can't seem to find a postal address on the web site and I suspect sending them via email might give the game away!

Modern Military Mother: I was very tempted to give him stature issues too but didn't want to confuse Mariella too much.

HIlarious Steve, made my day!

I'm a blogger desperate for public recognition but the Google rankings won't let me get a look in and Stephen Fry won't follow me back on twitter.
Can you please suggest how I can acquire your smoky voice and presenting career as I think I will have no problem in attracting the hits I deserve if only I had a higher public profile.
I will kidnap you a week next Saturday and ransom you for my own TV series if not.

Janete: glad to hear it!

Laura: fabulous idea and don't think I haven't already considered it. Only trouble is I doubt anybody would pay. P.S. Stephen Fry does follow me back.

I'm leaving a comment here out of force of hobbit.

Amanda: how elfish is that?!

Hurrah I have done my letter to Mariella...apologies for shamelessly nicking your intro paragraphs but I am rather hungover!
http://mommyhasaheadache.blogspot.com/2010/10/love-that-dare-not-speak-its-name.html

Emma: knew you wouldn't let me down! They say that plagiarism is the ultimate compliment - you can quote me anytime, baby!