Return Of The Blogging Jedi 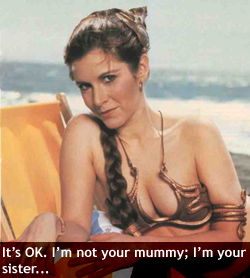 So last week I felt a tremor in the Force; you know that weird mystical energy that binds all blogs together, that flows through and around them? It’s called the internet or something...

Anyway, it gave me bad dreams, nightmares, a strange prescience of the blogging world that is to come. My master told me to quieten my mind and accept what I saw, to let go of my blogging attachments. “The Future it is that you see in your mind. Your fears let go of you must. In the Force trust you may.”

I told him to go and get stuffed. I don’t know about you but I don’t take orders or advice from someone who looks like a talking sprout and talks like a Norwegian exchange student.

It was possibly the worst move I ever made. I can see that now.

I was wholly unprepared for what happened next.

Out of the technological darkness came a dark shape. All in black. A cape. A mask. That anonymous heavy breathing that I normally only hear on the phone at 4am in the morning. We fought. Our light sabers clashing and humming like vibrators at a Hugh Hefner private video party.

I confess, I got cocky. I thought I was already a Jedi and could do anything, that I was unassailable. But I slipped. I fell. I found myself on my butt, on a gantry suspended thousands of feet above a man-made electronic chasm.

A black gloved hand reached out to me.

“Steve, Steve, the blogging Force is strong in you. Join with me and we can overthrow the rulers of the bloggosphere.”

The mask spoke again. “Obi Wan never told you the truth about the blogging world...”

“He told me enough!” I snarled. “He said that you corrupted all the mummy bloggers! That you destroyed them all!”

“No, Steve.” The mask shook its head and thrust its gloved hand towards me one more time. “I am your mummy blogger. Join me, we can rule the internet mummy blogger and... er... daddy blogger.”

What could I do? What was left to do?

I hurled myself screaming and nauseous from the gantry and after a fall of what seemed like aeons I found myself back in the garbage dump where I’d originally started – surrounded by all the usual stuff I write about: crap times at work, poor finances, all the women I fancy off the telly and all the drunks and oddballs of Leamington Spa.

And a cat in hell’s chance of ever being offered the chance to endorse the latest Nestle breast pump or Palitoy home liposuction kit.

God it’s good to be back.

Stevie, O great Jedi, it is good to have you back! The force may be strong in this one, me thinks

Well, not ALL, natch!

TheUndertaker: these are not the droids you are looking for!

Sarah: I think even Yoda will have to go to the wildlife sanctuary to have the oil washed out of his hair/feathers...!

Welcome home! Feel you missed an opportunity for a gratuitous Carrie Fisher pic, so you are clearly not up to full steam. Close your eyes and feel the force. Hands down.... I said force! Ps I dream of being asked to so a breast pump review, might spoof one for the hell of it ;0)

Kelloggsville: damn! Good point! Carrie Fisher in her metal bikini... hmm. May have to remedy that. Right; new batteries loaded into my saber... I'm onto it!

Stevie babe, I am going to get you an honorary Vegemite Vixen t-shirt made up. The words on the front and back will be sufficient to keep you on level footing and not be swayed by silly idiocies in the wider 'mummy' blogging community.

p.s. and in case you were wondering, the front says "Drink now, arse later", and the back "Drunk now, arse here" with an arrow pointing in the appropriate direction.

LCM: thank you from the heart, I feel truly honoured and will hold you to that. It reminds me of a T-shirt I often dreamed of having made in my twenties: front - "instant arsehole just add T-shirt"; back - "See?"

I don't want her to be my mom or my sister. Any other choice Steve?

Rummuser: oh I am so with you on that one. I was thinking more of a naughty first cousin...

Can't we go bomb the Death Star or something? Welcome back O great Jedi.

I feel like I just wandered into a drug-fuelled hallucination.

But it's good to have you back anyway.

lgsquirrel: now you're talking! Just make sure that shield generator is down before I begin my final attack run!

Rol: I confess I've been overdoing the cough sweets... but what I have described is pretty much a normal day for me. (Cheers.)

OC: spiritually speaking I took a brief 2 day journey into the wilderness...

Oh...A long hiatus for you but nothing compared to my frequent absences eh? I hope the "time out" proved fruitful, oh great apprentice...

OC: um... mine was more a brush with the dark side of blogging... read here for details.

Steve, you had us worried there for a moment, falling into that chasm... good to know it only led back to your starting point in Leamington. I have to admit you've aroused my curiosity now about some of the finer and more subtle points of British geography, as related to whatever a "chav" is, but I'm sure a litte searching on that dark cloak, errr, web, will clue me in and eradicate my ignorance in that domain... out of all negative situations usually come something positive...

Oh my goodness, I just typed in "Chatham Chav" on Google, and very quickly got to this site :

Not pretty... I think you better go underground for a few months until this blows over...

I think you really missed out there with the Nestle breast pump endorsement chance. Never mind. It'll come round again, sure.

Owen: always make sure you carry a packet of Marlboroughs with you to throw to any feral packs of chavs you come across in the same way you'd throw a steak chop at a ferocious dog to distract it. It works for me every time. ;-)

Fran: I hope so. I shaved my nipples and everything.

Lord Vader, master of the dark arts, sent Jabbina the Pizza Hut to lure you into her evil web and suck the juices from your body. Be grateful that you escaped with a few bites and most of your juices unsucked.

Crikey Steve......had I known all this mularkey was going on I would have popped in to give you a quick supportive hug when I was parked outside your place of the work the other day....well either that or a firm handshake....

Us sand people have to stick together. Welcome back.

Gorilla Bananas: thank you for singularly unerotic image which would have ruined the entire Star Wars saga for me if George Lucas hadn't got there first.

Libby: hug and handshake would both have been gratefully received.

Being Me: too right. Let's give the Jawas a damned good kicking.

Good to have you back from the clone war in one piece.

Remember, everything is relative.

This blogging lark is so much fun, don't you think. Can eat you up one day then spit you out the next.

Glad you haven't left us though.
CJ xx

CJ: I certainly felt a bit spat out after last week... I must have a very big stone at my heart, I guess! ;-)

You're over excited at the thought of 3D Star Wars....calm down...it'll only end in tears...mind you that's a great picture of Carrie Fisher...

Never go wondering off on your own again young man, now get up those stairs and into bed and don't make me come after you and slap your legs.

Nota Bene: ah but just imagine Carrie Fisher's metal bikini in 3D...! Worth getting excited for!

Heather: only if you promise to sit on the end of my bed and read me a story. Preferably one that doesn't feature battle axes or dragons or witches or fags or beer or chavs. ;-)

Livi: to be honest I'm thinking of plugging it into the mains...

you must have a high midichlorian count.

Tony: and a stupid haircut. I am the ultimate Jedi.

Oh Great Jedi Steve, it is so good to have you back. And by the way, there may be forces of evil afoot, but WE got your back. (U know who I mean.) I'm just sorry I missed the whole spectacle and wasn't around to help when it was all happening.

On a serious note, please know that you are supported here. We adore you!

Organic Motherhood with Cool Whip: thank you - that means a lot and the amount of support has been wonderful. Makes it all worthwhile (blogging that is, not the ruck that ensured last week)!

The Princess was never the same after Jabba got to her...

LöstJimmy: yeah, the french kissing was a step too far...!

this was just an opportunity to put Carrie's breasticles on display! Onwards and upwards - can you see how I am lagging behind!! soz!

MMM: "this was just an opportunity to put Carrie's breasticles on display" - busted!