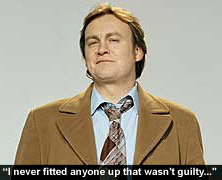 Karen and I are fighting off a hefty dose of the pre-winter blues at the moment by watching copious amounts of Life On Mars. Not content with mere re-runs on TV we’ve been sad enough to invest in the rather princely packaged boxed set so that we can watch the kipper tied adventures of DCI Gene Hunt and Sam Tyler whenever we feel like it.

And incredibly it’s even better upon a second viewing... which is saying something because personally the show got my vote for Best of 2006 the first time round. And I’m not at all alone in this opinion.

I suspect the show has proved so popular not just because of the clever premise (DI Tyler horrifically run over by a car in 2006 immediately wakes up in 1973 and finds himself immersed in the police culture and bigoted politics of that decade) but because - ostensibly set in 1973 - the show can justifiably dispense with all the tedious, irritating, creative red-tape that is Political Correctness.

Now I’m not saying that we should all open our doors once more to the Four Horsemen Of Idiocy – sexism, racism, homophobia and disability discrimination – but I think it’s a commonly held opinion that Political Correctness has turned the corner from sensible consideration for other people into a cul-de-sac of ridiculous and unending prohibition: can’t do that, can’t say that, mustn’t write that, shouldn’t wear that, etc, to the point where nobody knows what the best thing for anybody else is anymore and every example of PC-ness at work has had the effect of narrowing people’s freedoms and sowing more discord than there was before (Jack Straw’s comments about Muslim women wearing the burqa being a case in point).

Gene Hunt’s response to all this mock-saintly, nanny state prescriptiveness would be simple: “Stick it in yer pipe and smoke it, deaf-aid.”

And I bet you’re all laughing or at the very least smiling as a result.

But that’s the point. Have we gone so far down the road of trying to offend absolutely nobody that we now inevitably offend everybody? Has Political Correctness become so inhibitive and synonymous with the idea of “thought police” that a show that reminisces about the “good old days” of un-PC-ness and schoolyard intolerance actually makes the old days seem somehow glamorous, more free and attractive?

Of course I’m sure this wasn’t at all what the makers of the show wanted to achieve. But be honest. Who was your favourite character in Life On Mars? Who is the one that people enjoy quoting the most?

I have a sudden itch to wear Hi Karate and grow some sideburns.
Posted by Steve at Wednesday, October 18, 2006
Email ThisBlogThis!Share to TwitterShare to FacebookShare to Pinterest
Labels: GeneHunt, LifeOnMars, PhilipGlenister, SamTyler

Incorrect quote, shame on you. "Ive never fitted anyone up that didn't deserve it!"

Stella4eva: got me bang to rights, luv. Now make me a cup of tea.