Having been a massive Robin Of Sherwood fan since I was a teenager I’m awaiting the new BBC Robin Hood production with breath as baited as Friar Tuck’s nosegay. I feel amazingly precious about how the Robin Hood legend should be portrayed and, much to Karen’s amusement, am already mithering about the BBC’s current adaptation – forming my groundless opinions purely from the trailers that the Beeb is currently hurling at the nation like giant arrows from a slick multi million pound ballista.

Having grown up with Robin Of Sherwood my heart leans more to a grimly realistic portrayal of the legend – full of muck and hardship and dark Anglo-Saxon gods - and I worry that the new production will instead lean towards Kevin Costcutter’s take on the story: cheesy grins and coiffured hair, Hollywood style tavern room brawls, machismo sword play and flash-bang-wallop what a picture dramatization and dialogue. God how I hated Robin Hood: Prince Of Thieves. What a thoroughly reprehensible film. Stiff, heartless and grey. Robin Hood? Lobbin’ wood, more like.

The Beeb’s Robin Hood has already raised my hackles with fast zoom camera shots and a “hero muzak” soundtrack apostrophizing Robin’s every bow twang and sword clash and I’m not sure what kind of Sheriff the swivel-eyed Keith Allen will make. He’ll have a hard time following Nickolas Grace for my money. But hey. I’m being unfair. Condemning the programme before I’ve even seen it. Who do I think I am – the gov’nor at Guantanamo Bay? I’ll be good and reserve judgement until after Saturday.

In the meantime I just want to say that the new BBC Robin Hood, played by Jonas Armstrong, bears an uncanny and unfortunate resemblance to Gorillaz / Blur front man Damon Albarn which I’m going to find very hard to overcome when I watch the show.

“Curse you, wolfshead! What do you want with me?”

“Awight Sheriff. I wanna house, a very big house in the coun’ry, dun I? You wanna cut down on the venison matey – too much pork life, no worrimean? Now gis me giro.” 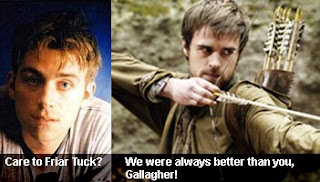 I bet Kevin Costner is kicking himself for a missed opportunity...
Posted by Steve at Thursday, October 05, 2006
Email ThisBlogThis!Share to TwitterShare to FacebookShare to Pinterest
Labels: BBC, DamonAlbarn, JonasArmstrong, LucyGriffiths, MaidMarian, RobinHood

You have a great talent of writing.Best of luck and keep going.And yes i have book mark your site www.pocketropolis.co.uk .

Anonymous: thanks very much.