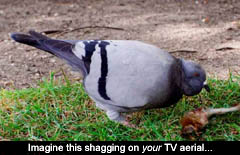 Last night Karen and I suffered the singularly peculiar experience of being woken up at 3am by our TV aerial clanging against itself in the wind.

We noticed it was broken a couple of weeks ago when by chance we forewent the usual televisual hogwash on cable and switched to good old terrestrial telly… and found that the reception on all channels resembled Channel 5 on a good night (international readers of this blog won’t have the foggiest what I’m talking about - let’s all savour the smugness of knowing something that they don’t…).

A quick sojourn out to the front garden revealed that our TV aerial was nigh on snapped in half and dangling down like the guest of honour at a bah-mitzvah.

How such a thing can have occurred when every other TV aerial in the street is flying stiff and correct at the horizontal, I don’t know. My only theory is that our aerial was singled out by an amorous pair of immensely obese pigeons who proceeded to go at it hammer and tongues on our "roof-top antenna love-pad" and wrecked the poor thing to within an inch of it falling off the roof in total embarrassment and disgust.

…and we’re going to have to pay some poor sap a few hundred pounds to go up on a ladder, fix the bloody thing and wipe it free of pigeon spunk.

Two birds shagging on your roof? Now that sounds like my kind of party...

Gales are forecast for the next few days... I'm afraid your "roof-top antenna love-pad" could well end up in the next county unless it is better secured...