Get Me To The Church On Time! 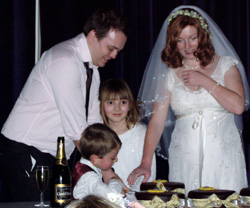 Yesterday I had the consummate honour of being the Best Man at the wedding of my good friends Tris and Emily.

Although as it turned out my actual title for the day was "The Almost But Not Quite Nearly Made It On Time But Didn’t" Best Man. Let me explain.

Normally getting from Leamington Spa (bright jewel of the Midlands) to London is an undertaking so easy as not to be worth discussing...

Yesterday, however, fate contrived to elevate this normally nondescript journey into something closely resembling a labour of Hercules.

Now Karen and I – being smart cookies and not unaware of some of the traffic problems that can sometimes befall the unwary traveller to London – factored in a huge 2 hour buffer zone to the timing of our journey and set off confidently at 9.0 am assured in the knowledge that the odd spot of congestion would hardly dent our schedule and be nothing but a minor aggravation.

I mean the wedding wasn’t until 2.0 pm – this gave us a whole 5 hours to make what should have been at most a 3 hour journey. Plenty of time to read the morning papers in the odd traffic jam on the motorway and still arrive in the Capital with enough time to spare to sup a skinny latte or two in a posh Oxford Street Café before heading off cool, calm and collected to Waltham Forest Registry Office.

Fate however had dictated that we were NOT to arrive on time for the wedding. First we were assailed by a 2 hour slow moving tailback on the M40 before the police turfed everybody off at junction 10. Fine, we thought, we’ll try the M1 instead. Unfortunately road works on the M1 created another 40 minute delay as we were funnelled through a contraflow system which had ground almost to a halt due to someone breaking down half way along it. Eventually we arrived on the M25 which thankfully was fine. Great. Moving again. We could still make it on time, we thought. Though we now had utterly no margin for error.

Ah how Fate must rejoice at such words. No margin for error…

Sigh. Heavy congestion along the sole segment of the M11 that we needed to travel along put any remaining hope we had of arriving on time for the ceremony completely beyond our reach. To add insult to injury after we’d painfully crawled to the end of the M11 the slip road we needed to take to bring us into London proper had been completely closed off due to road works and we ended up being diverted in completely the wrong direction!

Anyway, let’s dispense with the travelog. Tris and Emily were wonderful about it all. They delayed the ceremony for 10 minutes in the hope we’d still make it in time but in the end one of Tris’s friend’s had to step in at the last minute to do the business with the wedding rings… and the ceremony quite rightly went ahead. Karen, Ben and I finally arrived about 5 minutes before the end of the ceremony looking sweaty, chagrined and dishevelled with not a skinny latte in sight. The best laid plans of mice and men, eh?

For all that it was a wonderful day and Tris and Em, aside from looking fantastic, were fantastic – it was really great to be in London with so many lovely, warm hearted people and to be made to feel so welcome. We really wouldn’t have missed it for the world. I was able to discharge part of my Best Man duty at least by giving a speech at the reception (which hopefully didn’t die too much of an awful death) and it was very moving to see two of my best friend’s so happy together.

The whole occasion made Karen and I come all over all gooey and romantic too and our boy Ben really hit it off with Tris’s eldest kids, Frankie and Mila.

Worth a five hour car journey through hell?

Congratulations Tris and Emily – may you have a long, happy life together.

Next time we come to see you we’ll take the train.
Posted by Steve at Sunday, December 03, 2006
Email ThisBlogThis!Share to TwitterShare to FacebookShare to Pinterest
Labels: BestMan, Emily, late, London, trafficjam, Tris, wedding

Wow, from your title '"The Almost But Not Quite Nearly Made It On Time But Didn’t" Best Man', I guessed the story... yet still can't believe you didn't make it...! It's a pity (mainly because it's not the way stories should go). C'est la vie, I guess...;-)

Tell me about it - but at least Tris and Em had a happy ending: I guess that's the main thing!