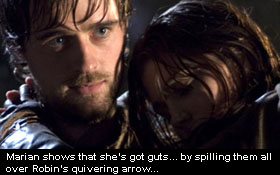 Last night in the penultimate episode we were treated to an occurrence of something that has sadly only made the odd cameo appearance in recent episodes… drama.

Yes, Dame Drama herself deigned to make an appearance… and what an improving light she cast upon the mock-Tudor mock-medieval mis-en-scene that has continually tripped up what otherwise could have been a decent rendition of the Robin Hood legend.

Marian was stabbed in her womanly belly by the dastardly Guy Of Gisbourne!

Sadly we did not get to see her maidenly belly as Marian stayed firmly wrapped up in her leathers for the remainder of the show having been stabbed whilst carrying out a daring mission as her alter ego, The Night Watchman. Neither did we get to see her quivering Saxon belly when Djaq, the puzzling Saracen woman who has joined the Merry Men for no other reason than modern political expediency, decided to perform acts of Eastern surgery upon her in an attempt to save her life.

I’m very disappointed. I spent the entire episode on the edge of my seat waiting to catch a glimpse of Lucy Griffith’s belly.

I’m convinced that in keeping with the plethora of painful anachronisms that have plagued the show since episode one, an expose of Marian’s belly would have shown that not only has her belly been tattooed with the words "Maz for da Hood 4eva" but that her belly button has also been pierced with a little silver arrow to show her secret love for Robin Hood…

But alas as this didn’t actually happen we had to make do with some actually quite decent dialogue between Robin and Marian as they finally declared their love for each other. And then Marian died. Cue manly heroic sobs from Robin. Marian remained dead. Cue intense looks of revenge-laden hatred from Robin as the Sheriff’s gloating voice chirrups forth from the background: "Robin! Come out come out come out… wherever you are!" Ah they’ve caught the colloquialisms of the period to a tee.

Final episode next week. Should be a corker. I strongly suspect that Marian will make a full, miraculous recovery and that her gaping wound will need to be sewn up by the powerful needle of love that only Robin Hood himself can provide.

Yes that is an innuendo.

A very Merry Christmas to you all – have a good one.