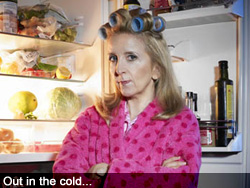 About time too. I can hear Gillian’s shrivelled bones circling the S-bend of television world even as I type.

Not that I’m taking credit, you understand, but this here blog has thrown a couple of good slaggings her way in the past; notably here, here and here...

And now for a movement of a different sort: I actually heard from Mr Chauffeur man yesterday. A very polite and respectful email promising to get payment to me ASAP. I was pleasantly gobsmacked.

About time too yet again.

I thought she was one of televisions' more entertaining monsters myself (though I had to look away when it came to the examination of her victims' bowel contents!)

For all the show's grossness, Gillian McK *did* seem to help her victims to an impressive degree though (who presumably participated of their own free will), and I think she was also the first to expose the direct correlation between bad food and bad health so graphically that no one could ignore it!

Agreed it's a frightening endictment on society that we now have all these shows about how to live raise kids/dogs/eat/have workable relationships etc, but again, if they are genuinely helping people who otherwise seem clueless, how evil are they?

If such a programme saves ONE dog/child/person's health or whatever in today's drain-bound nation, doesn't that justify it more than say an episode of say, 'Celebrity Love Island' in which it is hard to discern any benefit to humanity whatsoever?

Mind you, I think CLI now on the scrapheap along with Ms McKeith!

I know what you're saying and yes Gillian McK did have loads of successes... but I found myself wondering how many of her "clients" had to undergo counselling after they'd suffered such appalling abuse under her regime and utter control freakism. If it's a choice between a carrot and a stick I'll choose the carrot. If it has to be the stick then fair enough... I'll take it on the chin. But not when the stick has several nails driven through it and has been bound in electrified barb wire! Although Ms McK started off on the right track I think she simply took things too far. She got caught up in her own schtick rather than her own ethos. And then her shows got caught up with the idea of pushing the envelope of grossness further and further each time. She crossed a respect boundary somewhere along the line.

She had to be stopped...

Before she took over the entire world!

You must be glad about Gilian. Yes, I do remember those posts...;-)

Gillian McKeith is top of my list of BRING THEM TO MY HOUSE AND I WILL HURT YOU.
She is closely followed by Anthea Turner,Kim and Aggie and Trinnie and Susannah.
I do like Kim and Aggie but I still wouldn't want them rummaging in all my mucky nooks and crannies and as for Trinnie and Sususannah, they are way too touchy feely for me.AND don't get me started on Anthea!I love her program because she is so psychotic and OCD that any little foibles( like putting the dustpan and brush in the dishwasher-well they were dirty)I may have are nothing in comparison.

I quite like Trinny and Susannah (though prefer Susannah out of the two) precisely because they are so touchy feely... but I suspect my enjoyment is coming from a slightly dodgy place on that one!

As for Kim and Aggie: nice people but I couldn't spend time in their company, especially Aggie. She's damn scary.

Anthea Turner: spot on. The woman is a freak. Irritatingly obsessive and I think I'd have more respect for her housekeeping abilities if it weren't for the fact she employs a housekeeper in her own home. Cheat! If we had a housekeeper I'm sure our house would be spotless too. Well... for at least 30 minutes...!

I guess Ms McKeith got results but I think I ultimately agree with Steve that she went to too much of an extreme. The staring at the poo thing was just toooo much.

I think Gillian would have made a very good prison warder in "Prisoner: Cell Block H" actually. With her pinched features and prim manner I can just see her striding the corridors of Wentworth and torturing the women by feeding them their own faeces. "Och, you havnae eaten your dinner, Doreen! Swallow that poo NOW!"

Okay, forgive me that rather bizarre fantasy.

Ha ha! I know what you mean OC! What really disturbed me about the McKeith though was her Perfect Poo Chart and the fact she had poo shaped pieces of art on the walls of her house. She even took one of her "clients" to a farm in one episode and she was totally fascinated by the cow poo! Coprophilia anyone?

Quite. How anyone can be into faeces beats me. And as for poo art on one's walls - yeeeech! The woman is WARPED.

I question your sense of humour PerfectPoo! Do you find mediaeval torture and the questioning techniques employed at Guantanamo Bay funny as well? ;-)