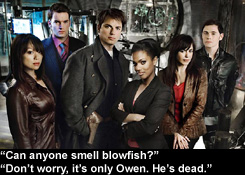 Firstly, apologies to those of you whose blogs I have yet to pay a visit to. I’m now halfway through my university essay and once that is out of the way normal service will resume once more. Until then my time for doing pleasurable things seems to be mightily restricted so sorry if I seem to be ignoring people.

And secondly apologies to those of you who view Torchwood as an ugly pimple on the otherwise unblemished face of modern sci-fi... because here’s yet another episode review...

Last night’s story was intriguing. Very intriguing. And not just because the writers had for once inverted their usual modus operandi. Instead of characterization playing second fiddle to gimmicky BBC effects, last night we had the effects relegated to a small sideshow while the emotional development of some of the characters took centre stage.

Maybe some sci-fi puritans will see this as a bad move: yet another sci-fi show degenerating into soft soap and sentimentality but personally I think this is a step in the right direction for Torchwood. It’s hard to care about a team of people who are so ineffably cold and wooden – it’s nice to see some warmth and human emotion being injected into them.

Ironically of course the character who is being humanized the most is Owen – and he’s about as cold and wooden as you’re likely to get on account of the fact that, both technically and medically, he’s dead. Dead as a doornail in fact. Nevertheless he’s walking around and doing his job regardless (I know how he feels). He’s the original dead man walking.

For once though the writers are doing a decent job of investigating the ramification of this “living death”. Owen’s painful attempts to come to terms with the fact that he’s unable to eat, drink, make love, heal, feel pain or indeed feel anything at all is being sensitively handled. The shot of him screaming underwater – unable to drown himself – was suitably discomforting and said far more than any stream of platitudinous dialogue.

Of course the science bit is rather ropey. Owen was unable to give mouth to mouth to Richard Briers (mind you, why would you want to?*) because he didn’t actually breathe air himself. Fine. But then how is it that Owen can talk? Surely you require breath for that? And if Owen has no blood why isn’t he desiccating or at least rustling a bit when he moves?

Burn Gorman is playing a blinder. His death has given his character depth and a new dimension. It has undercut his arrogance and aloofness and left a raw, sympathetic human being in his place. If only they can do the same for Captain Jack who’s “keep everybody at arms length” approach (even when he’s bedding them) is fast getting on my tits.

However, it’s difficult to see where they’ll now go with Owen’s character. He has a measure of indestructibility as he cannot feel pain but this is tempered by the fact that he cannot heal. Any breaks or injuries will be permanent. One strike and he’s out. A broken doll with a mind (hey, back into Stephen Hawking territory).

Maybe Owen ought to jump ship and join another Captain Jack who has had experience of dealing with the living dead? Head off to sunnier climes where he can ogle Kiera Knightly struggling to fill a corset and not worry that his death-bed BO is putting off his work colleagues as they nibble upon their M&S sandwiches...?

I can just see Owen weighing anchor on the Black Pearl...

I have to admit that we love Ianto and we think that he gets all the best lines.We found Owen a bit dark even before he 'died'.

Hi Ally, he was very cynical when alive but ironically seems to be becoming more philosophical and altruistic now that he's dead (aside from smacking the odd security guard in the face of course)! ;-)

steve...you never have to apologize for not visiting...i think we all understand that real life sometimes steps into blog time...just take care of yourself and be healthy...will have a post to show you how by tomorrow...

That's sweet Daisy, but if I don't drop by someone's blog every now and then it feels like not visiting a friend! Hmm. Maybe I need to get out more! ;-)

Good luck with your essay, Steve, I hope words are flowing nicely. We should swap writing assignments one day for fun - you can do one of my reports and I'll do an essay for you. It would be interesting to see if anyone noticed!

And certainly don't worry about blogging - we'll all still be here when you resurface.

Thanks Gina, though I've made damned good progress this afternoon. I only have the conclusion to write now and I'm done though I'm saving that for tomorrow as I'm pooped. All written out and my brain aches!

Yes. I'm not sure about giving Richard Briers mouth-to-mouth either. Though better him than Brian Blessed... I'm be afraid of falling in.

I long for the day that John Barrowman leaves London for the bright lights of . . . well, anywhere else really.

Am I too negative?

Inchy: the bright lights of The Gaza Strip perhaps? ;-)

Matthew, aside from being an anagram of "Doctor Who", Torchwood is an investigative institute that neutralizes the effects of alien interactions with the human race. Actually that description doesn't feature in the show at all; I just made it up. I'm angling for a job at the BBC...

The Barrowman, reporting live from Gazza, lifting the spirits of the locals with an impromptu rendition of 'Summer Nights' from Grease!