I had him sitting snugly on my lap while he happily munched his way through a chocolate coin or three.

Now any parent will know that a toddler + chocolate = C3 (Complete Chocolate Chaos). In layman's terms this means an end result that can be likened to an explosion in a chocolate factory. Willy Wonka hit by Jihadi terrorists. Cadbury's merging with Chernobyl. That kind of thing.

So being a wise boy-scout-like father I had a secret weapon stashed behind me: the wet wipe.

The wet wipe is surely the greatest invention of the Twentieth Century (after man-flu). Soft, moist and damned hard to perforate, their uses are multifarious and manifold but let's not go into all that right now.

Seeing that Tom was wearing the equivalent of chocolate gloves I reached sagely for my wet wipe with the speed of a sharpshooter...

Only to find that his hands were suddenly clean and spotless.

And then I saw my trousers... 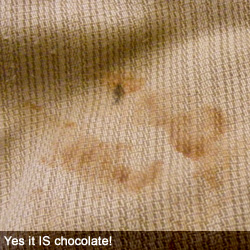 Although he didn't say it I'm sure his eyes were mouthing the words: thanks for being there, dad.

Is it me, or if you squint can you make out the face of a prophet there? Or possibly the one who played the flute in Jethro Tull? I hope you're ready for your trousers becoming a place of pilgimage.

I've got to say your trousers look exactly like the cover on our sofa, Steve! Cut from the same cloth?

Brother T, there are millions of women around the UK who have long held my trousers as a place of pilgrimage... though I suspect it is because they have often contained a prime example of a proper UK arsehole...

Indeed, OC - only the best for you and me, eh? Plus if I ever visit you I'll be able to make entertaining "frrp frrp" noises whenever I sit on your sofa.

You can laugh about it Steve. When Tom grows up and has his own child this will revisit him. Someday he'll turn his back for just a moment and turn around to find a taosted cheese sandwich in his DVD player...yes, he most surely will. :)

Just as long as it's HD oven ready and doesn't have a gammon steak bonus disk... ;-)

oh steve...you did make me smile...just think, if that is the worst thing that happens...you got off lucky, my friend!!! at least he didn't blow his nose (or wipe it) on your shirt...see a bright side to everything!!!

Thank you Femin Susan - your enthusiasm is much appreciated.

Daisy, I've already been hit by friendly bogey-fire... usually when I've just put on a clean shirt. I guess timing is everything!

I was about to make the same observation as Brother T. Steve, fame and fortune await!

Sadly Rol, I can see my trousers dumping me and moving onto bigger and better things without my sorry ass holding them back...

No more chocolate 'til the lad learns his lesson methinks.

And THREE chocolate coins? I only got ONE at a time, EVER. What on earth could he have he done to deserve THREE? Three days of Xmas washing up perhaps?

He might even vomit next time as counter-reward at such over-indulgence.

lol
lucky you noticed the trousers before you went out in public with them and got some funny looks!

What can I say, Laura, he's a chocolate chip of the old block and has a choc capacity to match his indulgent old man. Besides which if he gets three I feel justified in having the same... ;-)

Emma, my trousers and me get funny looks even on the best of days...

Hi Steve, here I am dragging my almost melted self to your blog. Happy New Year! As I type, it is 36 degrees...to hot to sleep at night when it 'drops" to 23!! The chocolate is kept in the fridge in these here parts...maybe a lesson there for you....

Amanda, I'm quite happy to loan you a couple of wet wipes...

Steve me ol' mucka, my wipes are wet already!

Amanda, that is way too much information (but thank you for your status update)... ;-)