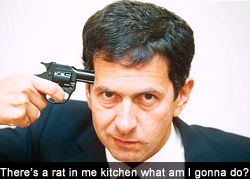 The Comic Relief version of The Apprentice was always going to a sure-fire laugh-a-minute for the sole reason it had Alan Carr mincing his way into SirAl’s boardroom like he was about to impersonate Shirley Bassey on a cruise ship.

But the best laughs of all came – unintentionally – from the mouth of Gerald Ratner, the ex Ratner’s jewellery retail chain director who has made a media career (almost) from verbal gaffs and interview based faux pas.

For those of you who don’t know, Mr Ratner once caused the shares of the Ratner’s jewellery company to plummet after telling a journalist that they were able to sell their products so cheaply because they were “total crap”.

One can’t find fault in his honesty or his accuracy but, really, he’s not the type of man you want on your marketing team if you’re trying to scrape together a living in the retail industry.

Mr Ratner first raised a titter when, discussing the reality of working with the insanely ebullient Jonathan Ross and Alan Carr, he turned deadpan to the camera and announced in a voice like a coffin lid being prised open with a jemmy that “he liked laughing; he liked to laugh”.

The best moment however came at the end of the show when the boys' team were trying to sell their new toy idea to a room full of high powered toy trade execs.

After a slick speech by Mr Ross and a less than slick but very funny advert voiced-over by the chocolaty tones of Mr Carr (I’m talking Fruit & Nut) it seemed the boys' team had the contest totally in the bag. The girls' team surely couldn’t compete.

Step forward Mr Ratner to give a business professional’s spin on the boy’s product...

He had to be honest, he said, their product (a utility belt to which kids could attach various collectable toys – I can still hear Alan Carr screeching “Swap-belt” on the commercial) would only succeed if a company went for broke in terms of marketing.

The selling concept had to be – and I quote – “shit or bust”.

Cue baffled silence from the audience as this sank in and Mr Ratner realised he’d possibly garbled what he’d originally meant to say.

The answer is obvious, isn’t it?

They were in it to make money. They were hardly going to vote for bust.

Like I said. Not a man you’d want on your marketing team. The girl’s won.
Posted by Steve at Friday, March 13, 2009
Email ThisBlogThis!Share to TwitterShare to FacebookShare to Pinterest
Labels: AlanCarr, AlanSugar, BBC, comedy, idiocy, JonathanRoss, television, TheApprentice

G'day from Australia. I came here from French Fancy's site.

You have a writing style that really engages readers. Good on ya ....

While it was good, it still didn't compare with Cheryl Cole's line the other year (2 years ago?) when she asked Trinny wotshername: "Have you got a touch of the OCD about yer?" Priceless.

Regrettably I missed that one!

It was quite funny. I wasn't sure if Patsy Palmer's outburst was 'staged' for the programme. Did you think the girls were right to win? Didn't see it Friday - who was fired?

I thought the same of Patsy - that and isn't she like Bianca! We tried to record the final instalment but managed to miss it. I know that Alan and Jack were called into the boardroom along with Gerald but I don't know who, ultimately, was sacked.

Didn't see it but thanks for the update!

Ah - something else I haven't watched!

Perhaps David McMahon and I should talk amongst ourselves?

Are they going to do another series of The Apprentice? It must be a year since that was on. It was one of the few things on TV I used to watch. Hope they wait till May though when I am back in the UK.

Suburbia: glad to be of service!

Gina: as long as you and David aren't planning on talking about me - could be a very tedious conversation! They are, even as I type, advertizing the new series. Not sure when it is due for broadcast though - sometime in the next few weeks I think!

In terms of putting your foot in it Ratner and Rossy (or Watner and Wossy) should make the dream team.
Or - should I say The Nightmare team?

Kaz, I know what you mean but although Wossy was OTT as usual I was actually quite impressed with his business savvy. Moreso than Gerry Ratner.

Shit or Bust...has to be one of the funniest things I've heard of...

I think we should use that more in our TV commercials....for toilet cleaners...or banks...

Or even bank managers who have become toilet cleaners...! ;-)