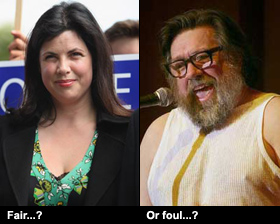 I got excited at work last week.

This singularly rare occurrence was caused by Kirstie Allsopp.

It seems that my employers were taking part in the new Keep Britain Tidy campaign that was about to be fired up and were asking for volunteers to take part in a special lunch time litter pick. How was Kirstie involved? Well, this new national campaign was being figure-headed by the particularly luscious Kirstie who I mistakenly thought was going to be personally throwing her lust-inducing weight behind the endeavour.

I was all prepared to wear rubber gloves and rubber boots (in fact rubber everything), give up my lunch break and get stuck in to the man made mountains of mess that regularly besmirch my home town of Leamington Spa. Not only was I prepared to invest in my own litter picker (which I’d be quite prepared to let Kirstie handle) but I was actually plotting to shovel extra detritus around the district’s footpaths and byways just so I could present my bulging sacks to Kirstie at the end of the event to show her what a tip-top litter picker-upper I really am.

I just know she’d have been impressed and would have whisked me off for a mochaccino somewhere to say a private thank you.

I had it all planned.

Sadly, once I tore my eyes from her picture and actually read the article on my work’s intranet properly it transpired that Kirstie would not be present at the actual Leamington Spa event. Instead she’d be at the official launch in London. What? Get your bleeding priorities right, Kirstie!

It seems all we’d get in L Spa was my big boss in his marigolds.

Not exactly a crowd puller. Needless to say I spurned the litter pick and moodily ate my sandwiches in the park and begrudgingly threw my crisp packet into the bin afterwards.

This is the story of my life. To not exactly brush fame as to see it smeared across someone else about 100 miles away.

Not that we don’t get to meet famous people through special events organized by my employers...

Only last month I could have taken part in an anti dog fouling campaign and met (not necessarily shaken hands with) Ricky Tomlinson who was taking a personal interest in the campaign and actually come down to Leamington Spa to throw his lust-repelling weight behind the launch.

Now I’m not knocking this campaign at all. Speaking as someone whose shoe soles seem to be permanent turd magnets I wholeheartedly approve of any endeavour to remove dog logs from our streets.

But Ricky Tomlinson? Posing next to a dog turd bin? It didn’t exactly get the juices of my enthusiasm flowing.

P.S. Would anyone like to purchase a second hand litter picker? Unused. Clean. Grip handle squeezed only once. Going cheap.

Andrew: that might make the "Keep Britain Tidy" campaign a little too mucky... But who cares? ;-)

It's a funny thing but all our towns round here are litter-free. Mind you there are mounds of dog poo because so many dogs are sent out alone to walk themselves. Needless to say the two bichons do not partake in this Freedom For Dogs

Shame about Kirstie not travelling further than West London.

FF: I'm now wondering if it was the dog poo that put her off...

Nota Bene: shame on you!

Perhaps Ricky Tomlinson could be a deterrent!
If you drop litter Ricky will show up in JUST rubber gloves to pick up litter!

Ally: And knowing my luck I'll be stood right behind him... urgh!

How dare you put a picture of Kirstie next to a picture of RT? Bad enough she has to share the screen with that Phil bloke, this really is going too far. I'll have nightmares now.

I watched Kirsty on Location X 3 last night. Have you noticed her shoes?
No way would she litter pick with the hoi polloi.
You would have to carry her along in a sedan chair and peel her a grape as she leaned over and flashed her bosom.
She should go on a diet anyway.
*Rushes off before Steve reads this*

Kaz: "You would have to carry her along in a sedan chair and peel her a grape as she leaned over and flashed her bosom". I wouldn't have a problem with that at all. I could eke those grapes out all day. And hold them a little further away from her mouth each time.

Oh dear, I'm with the "kirstie who?" but thats cos I really don't know.

Isn't it sad that us humans have to have a campaign to stop throwing rubbish about, even my pet rabbits keep their hutches tidy without me having to get on the telly and flash anything!!

Amanda: that's a good point. A lot of the worthy and humane campaigns should be done out of commonsense but it is rather sad that people need to be incentivised by cash or celebrity before they respond.

CaAPV: er... yes exactly. Our streets must be cleaned up for the benefit of all. Do you think that ethos should be applied to the "streets" of the World Wide Web as well?

Hmm!!! I find I'm suddenly a bit jealous of Ms Allsopp. Let's stop talking about her and talk about your little litter picker - I'd love to give your handle a squeeze....

Oh do you have a little crush Stevie? Quite frankly this Kirstie person doesn't deserve you if she isn't prepared to travel for you :)

Gypsy: what is this female obsession with size?!

I think you've let yourself with another blog obsessing over the Allsopp creature. I can cite 3 reasons: a) She's a Tory! b) she's an estate agent!! c) She's a bit minging anyway.

Time to raise your standards, Mr B!

You are the Sid James of Leamington spa.

Thank God you're not the Babs Windsor of Welwyn Garden...! ;-)

I'd like to see Kirstie in a rubber dress..just a rubber dress in fact !! Who wants to see her in gloves. I think she would make a great wife