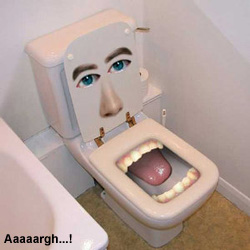 When you're a kid, toilets are magical, mythical, mystical contraptions.

Aside from the boyhood / manhood pleasure of blasting your urine around the rim like you're strafing an invisible enemy army, there is the magic of the disappearing water.

You pull / push the flusher and all that water shoots down and disappears... where?

As an adult, of course, the toilet is downgraded to merely a mechanical appliance that is (quite literally) always at your unthinking convenience but as a kid... they're akin to dragons and unicorns. Eerie, intriguing, frightening beasts of indeterminate morality.

My eldest boy, Ben, was always a little scared of the toilet and overcoming that fear was a major factor in getting him properly toilet trained... making that big step from carelessly filling his nappy to anticipating the demands of his bladder and making a pre-emptive strike at the portal of the big white telephone. He got a toy car every time he successfully made it to the toilet. Even now those cars are referred to as "poo cars". But his initial fear is understandable. That wide open mouth... The chasm down to deep waters... The porcelain abyss with it's strange smell even when the water is clean... It's a big thing to park your bum over it for the first time and relax enough to let nature take its course.

That fear is also greatly increased when the toilet has eaten one of your toys.

Ben once accidentally dropped a favourite toy down the loo when he flushed it. Of course it went the way of all small solid things trapped beneath the flush cycle.

And that only added to the mystique of the toilet. It transports things elsewhere... Elsewhere via dark underground water chutes. Through the sewers, through vast underground caves... out, out, far out to sea. Or so I used to think as a kid. It's a bit disappointing to learn as an adult that everything actually ends up in some huge sediment tank at a nearby water treatment plant where all the muck is literally sucked out of it. God knows where that toy is now but it's certainly not floating around the Atlantic as Finding Nemo would have you believe.

Anyway, my youngest, Tom, is displaying early signs of having an interest in the toilet. When he has a bath (or a "splish splash splosh" as it is known in my house) he likes to have a quick peak over the rim to see what's down there. I'm hoping this bodes well for future potty training and isn't an early indication of his entire Duplo brick collection making a bid for the Pacific sometime soon.

But regardless of erroneous submersibles and unlikely submarines, it's comforting to know that his toilet rites of passage will begin soon. That he too, in time, will embrace the mystique of the toilet.

Back in the days when cameras were cameras, I took a double exposure shot of a hand coming out of the loo. Happy to scare the living daylights out of your lads if you want a copy!

*isn't an early indication of his entire Duplo brick collection making a bid for the Pacific sometime soon.*

You really should become a professional writer - I know, I know, it's almost impossible these days to get publishers interested, but you really have such a gift for a fabulous turn of phrase.

I think French men and toilets do not have the same relationship as do the Boys from Blighty. The French prefer the great outdoors (we often see one of our neighbours weeing over certain plants)

Nota Bene: he he he... might save that for Hallowe'en (though preferably after Tom has been toilet trained...!

FF: You really should become a professional writer... It's not for the want of trying I can tell you - 2 chapters away now from completing my first novel...

As for the other place... I know, I've neglected it terribly and it's not like I don't have anything to write about... I guess I'm enjoying the escapism that Bloggertropolis offers for a while. I might try and produce something for "next door" over the next week or two. Keep 'em peeled, as Shaw Taylor used to say...!

You don't realise how frightening the toilet can be until you have a little one. We had to take potty everywhere because one of my girls just refused to sit on the toilet....any toilet. I didn't want to make it a big thing and hoped that one day she would just be ready to give the loo a whirl. That magic day arrived about 6 months after she'd been toilet trained when she proudly announced that I could give her potty away to a baby because she was a big girl now.


There have been a few frightening experiences in my life concerning the toilet. Such as when I don't turn the light on during the night so as not to disturb my husband, plonk myself down on the loo only to discover said husband has not put down the seat and I feel like I am falling down the same hole Alice went down in Wonderland. Very scary I can tell you. At least Alice was wearing knickers.

Gypsy: Lol! At least Alice was wearing knickers... - how I wish Lewis Carroll had used that to end the novel...! ;-)

Dear Steve, you write so charmingly well even about the most fundamental of subjects, something of an oracle, even on the subject of bodily orifices and what might emerge from them...

This reminds me of a piece by David Foster Wallace called "The Suffering Channel" which appeared at the end of a collection of short stories under the title "Oblivion". A rather fascinating story about miraculous poo...

As always your writing is a pleasure, even down to the punctuation, be it comma, or colon (which is the subject here I guess); or semi-colon (which is what some people unfortunately have after certain medical procedures)...

Haha, reminds me of when our Scowly Teen was younger. She threw a bath sponge down the loo, I asked her why and she said she just wanted to see what would happen! Another time I caught her standing over it, apparently trying to 'go like daddy'. Hm.

Our children were quite good when it came to the toilet. Our son even took to cleaning out his potty with a face flannel.

I found out the hard way.

I think if I came to a toilet like the one pictured I'd avoid it. The teeth scare me and as for the tongue!.........would you need toilet paper?

Or is the thing a fetish bidet?

Owen: colons are very important though I live in fear of mine having to be probed by medical cameras... that's why I'm always at pains to place and use them properly. I think it sends out good vibes.

Amanda: ah... going like the boys. Always intrigues girls for some reason and there are plenty of advantages to being on your feet and ready to run... less so now but back in the days of Cro-Magnon man I'm sure it had its uses.

AWB: a fetish bidet? I can think of some other faces I'd much rather be sitting on... hmm. That could an idea for another post (certainly if I wanted to lose my existing readership)...! ;-)

OMG - A write blog's son used a face flannel to clean out the potty. I will be wary of face flannels in houses with toddlers from now on.

I am still a bit scared of the toilet. I don't like strange ones - where I am not sure about the vigour of the flush and I hate those ones you find in public which are all metal. They are very scary looking.

My sons were pretty good with the loo. The middle one did go through a phase of pooing in the corners of rooms for some reason which presumably was fear. I kept putting potties in corners in the hope he might use them but well, there are a lot of corners in a house!

Gina: metal toilets are horrible. I'm grateful I've only ever had to stand in front of one rather sit on one! When I was in Egypt I encountered some really foul toilets but was too ill at the time to care... any port in a storm as they say! ;-)

You are so lucky Ben was scared of the toilet. One of my daughters managed to (age 2) stuff a teddy all the way down the U bend. How my husband laughed as he had to take up the toilet (er, not)

Emma: the bear involved wasn't by any chance Winnie The Pooh, was it? Sorry. Couldn't resist. ;-)

Toilets were once purely functional to me. Now it's the one place I can go, lock the door and no one bothers me. The kids seem to have picked up the habit though and ours is wall to wall with books and comics, can barely find the loo roll.
We do have a heated seat for the winter though, it's not altogether unpleasant to hang out in there.
By the way if you find the car, do find out if it saw Barbie, we lost a few in the same way, they've never made it home.

MissBehaving: a heated toilet seat? Wow. That sounds like luxury. True luxury. As for Barbie... poor Ken. To lose the love of a good woman like that... Did she jump or was it assisted suicide?

tell tom not to panic, steve. i will happily gather up his lego and post it back home X

Katie: aw thank you, that's so sweet. You couldn't have a look for a Scooby-Doo sticker card while you're at it, could you? Lost around 1975... might be a bit worn and faded by now...