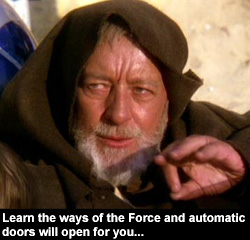 I'm probably going to regret this but... well, what the hell, surely I can't be the only one. Yes, it's confession time again folks. Time to 'fess up to some idiocy that I desperately hope I share with other people in a pathetic attempt to normalise it in the first place.

Picture the scene. You're alone in an elevator. The floor you want is approaching. You know the doors are going to shush open any minute. You're all alone. Unobserved. It can't hurt, can it? Just to... you know, wave your hand in front of the door as if you were a Jedi and then have the door magically open before you. I mean, it's not like I pull my hoody up and speak in a weirdly stilted Alec Guinness voice at the same time. I don't have Star Wars posters on my bedroom wall. I don't have my religion recorded at the passport office as "Jedi" as some idiots do.

I just, you know, every now and then, get overtaken with the urge to pretend to open automatic doors purely by mind control.

It's a harmless thing really. I bet everybody does it. Or at least has done it at least once. Haven't you? Come on, admit it.

It's not a sign of illness or anything. I'm perfectly sane. Really. I never take it too far.

Well, not since my attempts to control my boss's thought processes failed miserably and I didn't get the outrageously high payrise I was asking for.

Me: "Steve is an excellent worker and deserves a payrise of monumental proportions..."

My Boss: "Steve, why are you waving you hand at me and speaking in that weird voice?"

Me: "You feel the need to give me monetary remuneration for all the crap I have to deal with at work..."

My Boss: "Do you need to speak to a first aider?"

Me (sighing): "Oh never mind. Forget I said anything."

My Boss (under his breath): "Your pathetic Jedi mind tricks won't work on me, boy..."

Serves you right for working for the Dark Side.

Rol: you're ripe for conversion, my young apprentice. I can feel your anger from here. It gives you focus...

Steve, Powerful you have become, the dark side I sense in you.

FF: indeed. We have come full circle. Once I was but the apprentice but now I am the master.

Heather: I know. A master there always is... and an apprentice. ;-)

*chuckle* interesting. At the beginning, I guessed wrong - I thought you were going to say that the thing you did in elevators was something kinky like taking off your shirt and wearing it backwards, etc - so waving just a hand is ok, hehe :-)

Eve: with only 4 floors to choose from I don't really have enough time to loosen my tie let alone take my shirt off! ;-)

I quite often try the Jedi mind trick on The Demon, especially if she's being particularly hard of thinking or if her brother is round at ours.
She'll say something dumb, at which point I'll pass my hand in front of her and pronounce that "these are not the droids you're looking for".
Her brother will at this point start to piss himself laughing, but The Demon, who has never seen Star Wars (no, seriously!), will put on her best pout and claim that she doesn't know what I'm talking about.
It's like panto season all year round in my house.

Inchy: I hope you don't take this panto thing too far... like dressing up as a woman and shouting "He's behind you..." at every pause in the conversation.

You're not aloon in this, Steve; everbody has their quirks
Apart from myself, of course ;)
I do, however, worry about your insistence upon being sane, it's a sure sign of madness :o
------------
I'm in two or three minds about writing the next bit but I'm all out of rouge so I can't makeup me mind
------------
One is all a1one. Completely. Otherness is merely a projection of the ego-me-min{e}d i.e. an illusion of like and dislike splitting hairy splinters off the divine and blahdeeblahyakyak
------------
Hrh-hmm, yes..quite... come along Bloggs, time for rest in the rubber room.
Yeah-but-oi-ang-on! In the Highlander film they're on about, "There can be only one" - so, erh, point proven, yes?
Good, I'll just go and rip me write arm off and then at least I'll be an armless looney, eh?

Joe Bloggs: ah Conner McLeod... I remember it well. There can indeed only be one. But the prize was worth having - being able to understand everyone. Hear their thoughts. Not unlike being a Jedi in fact. As Inchy says above: these are not the droids you are looking for...!

Amidst my despair your post has made me chuckle, a lot...thank you!

I'm so used to automatic doors that I am simply surprised when they do not open as I approach. I haven't run into a mundane non-automatic door yet, but I have felt foolish in my expectation and looked around to see who might be watching.

Löst Jimmy: glad to be of service - hope the pall lifts soon.

English Rider: ah the old walking into a plate glass door trick. I have done it a few times I admit both with and without an audience. Glad to say the frequency of this has lessened as I have got older.

Clueless, sorry, absolutely no idea
what you're talking about, but showing up all the same, cos I read that 90% of life is just showing. Hello!

MissBehaving: you always get points for showing up! Always.

Yes Steve, EVERYBODY does it.
really.
;-)

Oh it's very harmless but it's not at all sane, Steve.

But I think you are in good company here - everyone else is bonkers too.

I've never tried the liftdoor opening thing but I shall give it a try next time. I'll try to avoid the glass lift in the shopping centre though.

Clippy Mat: I just knew it!

Gina: yes, it only works when no-one is watching. It's a curious trait of the Force, I'm afraid.

No
I don't do anything magical like that.
But I do tell inanimate objects to F*** off.
And not always quietly.

Kaz: I've got a few objects here that need a good telling... if ever you're passing...

Idiocy? Gosh, I hope not.

See, my upstairs toilet runs a long time refilling, and I often like to stand in my bedroom, point to the unseen toilet two walls and a hallway away, point my finger at it and say, "Stop!"

My day is made perfect when it does within a second after my command.

The Crow: I do the same with our dodgy kitchen light. It always sputters a bit before coming on and I like to click my fingers a nanosecond before it does!

STEVE: It's a harmless thing really. I bet everybody does it. Or at least has done it at least once. Haven't you?
SELINA: No!

I think they have a room all ready for you on a place called Shutter Island...

Selina: you're missing out. Go on, give it a try. I won't tell anyone!

Owen: as long as I don't have to share a room with L. Di Caprio, I don't mind!

I wouldn't mind to share a room with Di Caprio, although I'd prefer George Clooney! Anyway the force in me is so weak that I even manage to get stuck on elevators not to mention opening sliding doors. Since ER I've been training my mental forces to get him here to me but I don't think it's working very well over a TV or cinema screen! Ciao. A.

Lunarossa: plainly you are a youngling in the ways of the Force...!

Crikey, for a minute there I was worried about where that was going...a few years ago now a friend and I got the same lift at work every morning, and every morning whoever had been in the lift before us had -erm, you know...'expelled gas'...we never could find who the culprit was but everyone else who got in the lift at other floors was obviously trying to work out if it was me or her!! Your story is much better!!

Just remember elevators have security cameras and the men in white coats might be waiting one day LOL. But hey if there is welding helmet near by Darth Vader takes over me ha ha ha

Amanda: ah, the old Peter Seller's farting in the elevator gag (quite literally "gag" by the sounds of it). Now that is a real classic. Not for the (rank) amateur as the danger of follow-through is quite high.

Vicky: I always check for security cameras first by waving my hands above me and seeing if I feel a tremour in the Force (as if a million people cried out at once in laughter and then were silent).

BTW-found your blog through your really home hitting comments on Moments from suburbia's blog. I like that you say your piece and what's on your mind!

Susie: thank you for dropping by! Hope you'll drop in again!