Addendum: I've since had it confirmed by my mother that the (older) gentleman in the picture below is my maternal great-grandfather not paternal and has therefore been identified as Henry Hyde and not, as previously stated, Arthur Benjamin Olorenshaw.

I rarely publish photographs of myself on this blog. Not because I think I’m particularly un-photogenic (although I do) but simply because (and I realise this is a paradox) I like to retain an element of privacy even as I lay my soul bare with a series of sumptuously written exposés detailing my sexual and criminal exploits as an MI5 operative in Siberia (including my life and times as a circus based gigolo). Apologies if you have missed those posts but you really should have been paying better attention.

However, the call went out for a photograph of me – donning a flat cap – with which you could all compare and contrast the one of my great-granddad that featured in my previous post. I was simply overwhelmed and inundated with two of you demanding I supply such a unique photograph.

And thus, even though I have a hundred and one other things to write about – including my blog being stalked by someone who fancies themselves as an old school East End villain (I kid you not – just wait for Thursday’s post) – I have decided to acquiesce to this request.

So here for your delectation is once again my great-granddad, Henry Hyde, and for the first time ever, yours truly, full faced, cloth capped and making lurve to the camera: 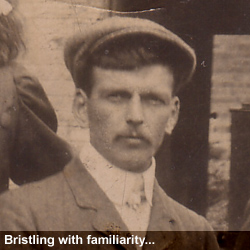 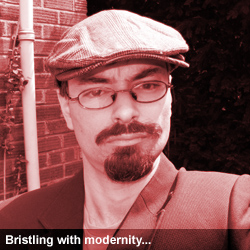 I leave it up to you to figure out which one is which.

Aah but Steven, great grandad has a little more panache eeup mun - there's a bad whiff of andy capp with you - sorry and the face furniture (yes, specs) don't quite do the je ne quois (sp?) - sorry hun

It's a pity you're anonymous 'cos I'm never speaking to you ever again.

Both photos show the same upturn at the corner of the mouth: there's something fun and a little bit naughty about both of you!

Actually when I look again at both photos, the upturn is hardly visible - but I just sense it, a hint maybe.

Could you please post the circus based gigolo piece again, I'm sure I must have missed it ! Sounds titillatingly scandalous, I'm sure you could even work it into a serialized series of posts, after which I have not the slightest doubt that Bloggertropolis would go viral in a big way !!! Just think of all the people the world over who are just dying to discover these exploits, without even realizing what was causing their malaise...

So, the man himself at last! Your moustache is rather more luxurious than your great granddad's but I can see the likeness. I am looking forward to the east end stalking post.

Trish: I can't speak for my ancient progenitor but I can confirm a tendency towards naughtiness in the young fella (a fact my wife will be all too willing to back-up).

Owen: not so much Belle de Jour as Pitre de Jour...? I would have to doctor photos, change names of people and places... it's a lot of work. I'd need a huge advance from a publishing company and adoption into the Witness Protection programme before I even dared put finger to keyboard...

Alienne: my tache has never been called luxurious before - thank you. As for Friday's East End gangsta special... let's hope I live long enough to write it. Apparently there's a flyover with my name on it already...!

You look uncannily like Leon Trotsky in the flat cap. Sure there's no link there in the old family tree? Can I now have a photo of you with an ice pick in the head so I can compare more fully?

Tris: next time I spend the family's food shopping budget on Lego I'm sure my good lady wife will only be too happy to oblige.

Is it possible to make an ice pick out of Lego?

Tris: my wife assures me that it will be...

There is something the same about the almost glaring look you both give the camera. I'd like one without the specs too. And I've spent hours researching your blog (and lost my job, to boot) and still haven't found the circus gigolo post. Oh well, I'll keep looking. I've got lots of time on my hands now.

Femminismo: do hope you're joking about losing your job! As for the circus gigolo photo... I'd honestly publish it here without a second thought but the horse's owner said she'd sue if it ever got out...

Well, there is def a striking similarity.

And you do look very handsome, Steve. I might drop my "no kiss moustached men" for you!!! Tee hee only teasing!

Gina: you build me up just to knock me down again. At least my 'tache is relatively constant. ;-)

Steve somehow you look very different to the photo at the top of the blog...and I do get the Trotsky vibe as well...next time I'm waiting outside St Peters for my pa I'll be scanning passers by for you! and what is evil deeds all about?

Libby: I think it's because you can see my glorious head of hair in the top photo... plus my pose is more relaxed rather than the tense taking-a-photo-of-myself-single-handed-and-not-sure-if-it's-a-good-idea look you get in the photo of me with the cap. Evil Deeds is my private blog - now renamed (you've reminded me - must update the link) "Walls Without Ears". It's invitation only and if you'd like to gain access merely respond to the comment I'm about to post on your blog...!

Can we be sure this is you and not an Identi-Kit composite you've made for the occaision, Steve?

At first glance there's no striking resemblance but after having donned my facial recognition spex there seems to be a shared cheekbone structure and jawline. Please tilt hat back slightly, remove glasses and move the camera slightly down and to the left, whilst you also turn a bit more to your left and gaze beyond the camera.... I hope I'm not asking for to much here?

Joe: bang on the nose as usual... or rather the cheeks. It's all in the cheekbone structure as you have pointed out. As for the rest, anything short of a full frontal is a fair request...

I tip my cap to you young sir!
A fine likeness if ever there was and a pretty decent flat cap to boot.

An East End type stalking!? I look forward to the Friday revelation. Cor Blimey and all that

Löst Jimmy: my thanks and appreciation for your keen discernment! As for the Southern monkey... I might need to call on some Northern muscle to back myself up should things get to the point where people need to be tooled up. Hope you're up for it. ;-)

Who starches the collars for you. I mean, that IS you, isn't it?

I'm not sure which is which, but they're both handsome devils, aren't they? It must be the cloth caps that do it.

Steve, I'm the same as you (oh no, wait, not in the facial hair/burning look to camera/specs/donned cap kind of way). I too am a paradox in that I rarely (if ever) publish photos of myself - I made an exception the other day - whilst simultaneously baring seemingly all in my blog post writing.

I am looking forward very much to hearing about your good old-fashioned stalking. Have had several in my time (including one who came right out and said they'd Google Earth searched my house and pointed out things about our house's street appeal... needless to say, we have since moved and now I am even more strict on privacy and we have everything unlisted.... *shudder*)

Oh, whoops, meant to say - the whole point of my comment - my cap is off to you for braving the full frontal, up close self-portrait. It's not as simple and straightforward as it might appear. I can see a very slight resemblance with Arthur, but it's more in a sense of presence than anything else. I do know what you mean about familiarity: I don't look much like my grandfather but everything about him (we never met) just envelopes me with security when I see him in photos.

Perhaps something to do with our ancestors/relatives resembling living relatives we are familiar with?

So you're the top one huh?!

How brave of you to show your face after East End Anonymous left you such whack-a-doodle menacing comments. Face down your enemy?

Can we have a photo of you as the circus based gigolo?

Your grandfather is a very handsome man but you....oh Steve....I've had to sit down as I've come over all weak. You should post photos more often.

Fran: I get them done at a tip top drapers in Saville Row, what!

OC: what a lovely thing to say and a real antidote to the Andy Capp jibe of the first comment!

Being Me: as someone else has pointed out (and as my wife picked up on) it's more in the bone structure of the face; certainly the cheeks. But, yes, maybe presence too. I certainly felt a sense of connection when I saw him. My youngest boy, Tom, definitely has Arthur's magnificent ears. Yes the stalking is a little unsettling - though I think mine is nothing in comparison to what you went through - but threats, no matter how veiled, are never very nice.

English Rider: sometimes when you want to bring down a wolf you have to show it the hare. Or something like that.

Amanda: I would love to but as I've said above the owner of the animal sanctuary involved said she'd sue. My hands are tied. And indeed were.

Selina: surely you jest! I was never known for my looks at school and have had a real complex about them for... well... most of my life. Where were you when I needed my confidence boosting as a lad? Mind you, I didn't have the 'tache and beard back then!

Suburbia: sorry - missed you! I wish I was as dapper as the one on the top. Even I have to admit that in my best jacket and flat cap I don't quite pull it off!

I just had to come and have a look! Posting pictures of oneself does make you vulnerable. I feel a bit that way today and cringe everytime I open the comments box!

Hmm, interesting! I love the beret :-)

Well, it's not just flattery but you are a good looking bloke, Steve. If I were sitting opposite you on the tube I would imagine you as an actor or playwright or...successful author.

It's all in the genes I guess - your grandad was very handsome.

FF: flattery will get you positively everywhere...!

Ahahah! Ok, I admit, I never knew that...*Grins* am looking for some flat caps myself... it's one of the few hat styles I like (as well as cowboy hats! Perhaps you should try one :-))

Eve: I did once and... no, defifinitely didn't suit me. Flat caps are about the only hat that does aside from a good old fashioned woollen "bobble" hat, of course; they suit everybody.