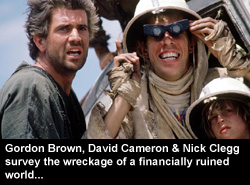 Monday night I think it was, the 9.0 watershed had arrived and with it a complete dirth of anything worthy to watch on TV... so I did the only thing a sane man can do in such a situation. I spurned all thought of improving myself with a good book and channel hopped my way out of boredom.

This may say something about the state of my mind at the time but I settled for Mad Max Beyond Thunderdome showing on one of ITV's alternative cable channels. Admittedly I only watched about an hour of it before sleep overcame me but I have say, hand on heart, despite the awfully dated eighties soundtrack and production values I quite enjoyed what I saw. I'm sure most of my enjoyment came from a sense of nostalgia - I remember going to see this film at the cinema with my mate Tris sometime after we left Art College.

Looking back on it now I'm astonished at how camp the film is, how subliminally homo-erotic. Men everywhere oiled up and dressed in bizarre cut-away leather costumes that would have been far too provocative for Priscilla Queen Of The Desert. Dirt, grime and sweat beading every curved and rounded bicep. And through it all Mel Gibson staring out at the camera with that knowing look that says my eyes are bluer than anybody elses and that's why the ladies love me.

It's strange to reappraise Tina Turner's performance too now that the obstacle of her music career is all but removed. She's not bad. Not bad at all. She has real presence and charisma. I remember not really liking her in the film at the time. I think everytime she duck waddled on the screen I kept having flashbacks to Nutbush City Limits... and let's be honest, when a woman old enough to be your granny is on a huge screen before you wearing a skirt shorter than the BNP's MP list the last thing you want to be thinking about is Nutbush.

Anyway, the film seemed rather apt for these modern politically grey times. All is in disarray. Nobody knows what they want or how to get it. They just know what they don't want. They don't want another hero. They just want life beyond Thunderdome.

As I type I am having visions of Nick Clegg sitting astride David Cameron's shoulders in some bizarre homage to Master-Blaster. But does that make Gordon Brown Mad Max? And who the hell is going to be our Auntie? Is our little Barter Town going to be run forever on pig shit?

I don't know. All I know is today I am breaking out the leathers and walking around talking with an Australian accent. There's got to be a better world out there beyond the desert. There's just got to be.

Care to help me find it?

When you get to Sydney, keep going straight onwatds...!!

Sorry Amanda - Blogger seems to have eaten your comment! Is this indicative of the new political world we find ourselves in?

Dammit! And it was such a clever and witty comment too!!

Loved this! I really enjoyed the film so can see the comparisions. I was really cross about it all but you've given me a different side to look at!

Apologies all - Blogger seems to be mucking up my comment moderation at the moment and not publishing any of your comments. Do keep trying - I'm assuming they are safe somewhere and will reappear later (and haven't been lost in the electronic ether).

Oops. Seems the Blogging gods have heard me... right; back to business.

Amanda: it was clever and witty - but I do hope the dress made out of red sandals is optional in terms of the dress code.

jfb57: always glad to give thing a positive (neutral?) spin! It seems that in this modern age, spin is all we have.

And why hasn't Tris blogged since September? I do think he owes us some sort of explanation.

FF: ha ha! it's not for me to be Tris's apologist but I'd guess a busy family life and a high stress job in the London media industry might have something to do with it! ;-)

There can be something weirdly comforting about post-apocalyptic fiction and films, maybe it is partially that the worst has now happened, no need to worry.

ArtSparker: ...and the fact we can always rely on Mel Gibson to save us.

*Gulp* I'm packing my suitcase now. Time to head for the hills...

Once again, I feel I can't contribute anything at all that is quite as pithy... All I did was that ever so internet-tragic 'LMAO', particularly at the Nutbush line. That's been cracking me up randomly for the past day since I first read it.

Being Me: Nutbush has that effect on most people. In fact I think it should become a verb. We have all been thoroughly Nutbushed by the recent election!

Let's just storm No.10 with you dressed as Mad Max to restore our green and pleasant land of Jerusalem! It's the only way.

The Theory And Practice Of Oligarchical Collectivism

Throughout recorded time, and probably since the end of the Neolithic Age, there have been three kinds of people in the world, the High, the Middle, and the Low. They have been subdivided in many ways, they have borne countless different names, and their relative numbers, as well as their attitude towards one another, have varied from age to age: but the essential structure of society has never altered. Even after enormous upheavals and seemingly irrevocable changes, the same pattern has always reasserted itself, just as a gyroscope will always return to equilibrium, however far it is pushed one way or the other.
The aims of these groups are entirely irreconcilable...

Winston stopped reading, chiefly in order to appreciate the fact that he was reading,

Ozmosis: alas, my friend, all my hope for the future has evaporated, water fool I have been...

Rank and numb?erh: Anna nother thing... never discuss religion or politics if you wAnna make friends and influence people. Stick to hobbies or pop music. Or films or cooking. Tis the Annatomy of a peaceful existence.

Photo of you in leathers please ;)?!!

Well, you did say there was nothing on telly?!

I think the next sequel should be set in Somalia... there are some real men there who don't eat quiche and only ask questions after they shoot...

Frau Merkle as Auntie? Mad Max hit the spot with me, way back when. Unfortunately I now choose to boycott anything Gibsonesque, for so many reasons. Talent does not excuse Mega-Prickdom!

Anonymous: certainly. Just forward me your name and address.

English Rider: Mega-Prickdom, however, does pretty much guarantee you a job in the UK Parliament...

Steve, I am sure you would have done awesomely in your teens in leather, oiled up back and that wild stare in your eyes... Very fitting for the english society... : )
Read about MM4 on wikipedia, so that's gospel then, right?

TheUndetaker: if it's on Wiki then I'm pre-ordering on Amazon right now! ;-) And you're probably right about the leathers... not sure middle England would have really been ready for that.

Angry Anderson of Rose Tattoo fame had a wonderful part in the Thunderdome film but apart from that I was never really a fan of the third installment of Mad Max. I recall driving a 240 mile round trip in a battered old VW complete with girlfriend to see this film when it was released back in the mid eighties, oh the things one would do for a glimpse of garter (on the blue eyed girlfriend not Max I hasten to add here!)

Löst Jimmy: Mel Gibson in a garter?! Noooooo! Get it out of my head! Please! Take it away!