You Know You’ve Been Watching Too Much Disney Pixar When... 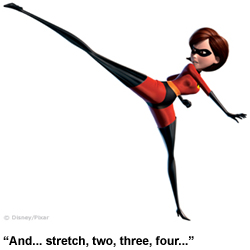 You start rating the music in Ice Age 2 and start fancying Elastigirl from The Incredibles.

He goes through spells where the same DVD is a la mode for entire weekends at a time. This is interminable when the DVD happens to be Thomas The Tank Engine or Barney The Purple Dinosaur but thankfully he’s quite discerning about what films he wants to watch.

Hence I am now surprisingly well versed in the best that Disney Pixar studios have to offer. I can recount entire swathes of script from all the Toy Story movies, Ice Age and The Incredibles.

More scarily I am starting to analyse them, score them on plot and character development, take them to task on their ethical content. I am getting to the point where I am taking them far too seriously.

I am getting to the point where I am loving them and deeply respecting the script writers and the story-boarders. And the composers.

Ice Age 2 has, I think, one of the best music scores ever. It’s brilliant in the same way that Gustav Holst’s Jupiter is brilliant and for much the same reason. The music is uplifting and jolly but without being frivolous and grating. It is rich in emotional range and spirit. I could quite happily listen to it all day long and highly recommend you all give it a go.

All this from a kid’s cartoon.

Elastigirl contorting herself into positions that a gynaecologist would consider obscene (but possibly helpful).

Elastigirl displaying parts of her anatomy that the guys at Disney Pixar had probably never even dreamt of let alone drawn.

Hey, hey, come back, come back – you can check out Google later after you’ve finished reading! Those pics ain’t going anywhere, I promise you. Geez.

Anyway, it got me thinking. Is it a bit too weird to fancy a cartoon character? Is it only guys that do this?

Because I’m very aware that for a lot of guys their first boyhood crush was probably on Daphne from Scooby-Doo. Sure she was a little vacuous, too much of a Valley Girl for her own good, but you just knew she’d get down and dirty behind the sand dunes at a beach-front tiki party and do things for Scooby snacks that even the great Scooby Doo himself would baulk at.

And then, somewhere in my mind, I seem to recall another cartoon diva that was a big feature of my childhood. Does anyone remember The Arabian Knights? I think it was one of the regular cartoons on The Banana Splits. I’m sure there was an Arabian girl character on there that used to float my pre-pubescent boat. I seem to recall genie trousers, exposed mid-riff and a veil... but maybe I’m making that up or even confusing it with something else?

I daren’t Google it. After the Elastigirl interpretations I’m not sure my heart could take it...

dbs: you plainly like your women to have the brain of Brian Cox...

Elastigirl was a great mother, too. You had to admire her on all fronts. She's my fav character too (though I don't fancy her in the same way as you and I'm not headed to google after I hit publish).

You need to get out more, mate - seriously!

Wanderlust: she was; and a great wife too. And she can stretch into any position. I did mention that, right?

Nana Go-Go: I need to get on the right side of my parole officer first.

I can't believe you didn't mention Josie and the Pussycats. Boys have wanked themselves blind fantasising about those cartoon nymphs.

Such memories! I was turned on by Wilma in "The Flintstone".

Ah the fantasy - driving up in my Dino Car handing the keys to Ed "Kookie" Byrnes and jivin' with "The Fonze".

I had a confused childhood. Beam me up Layla.

Gorilla Bananas: Goddamnit, I knew I had a deprived childhood. I've heard of them but never seen them.

Marginalia: yes - another good call. Wilma. Always reminds me of the episode of Red Dwarf where Lister is discussing the pros of bedding Wilma with the Cat. Would they do Betty? Yup. They'd do Betty. But they'd be thinking of Wilma...

@Steve - I don't think you're striking the proper tone. I was referring to her character.

Wanderlust: she's a great character. One of Pixar's best. And she can stre-e-e-tch. Sorry. The only tone I can do is "low".

I always liked the score in Return to Neverland. Do you ever watch Pixar with the directors commentary. It's really interesting. I find both Sully and Shrek the perfect hunks and I would do them both.

Agree with you on the musical score of Ice Age 2. But have you seen Fantastic Mr Fox?? Brilliant movie. Wonderful soundtrack!

And have you seen Cloudy With A Chance Of Meatballs? I resisted, for the longest time. But come on. There's a monkey in it called Steve. And all he can say is 'Steve'. So now that's what our daughter calls her father. In a monkey voice. Because she's seen the movie 4,842 times. This week. You've gotta try it!

Kelloggsville: Shrek?!? You utter weirdo! And as for watching the movies with the commentaries... I'm not sure our little boy would allow that.

Being Me: I must admit I haven't seen Cloudy With A Chance Of Meatballs - and not sure I should even allow it into the house now that I know about Steve the monkey. My family have enough material to rib me about without adding a monkey into the mix!

Vicky: seriously, give it a go. It's a terrifice story with a good emotional arc.

Heather: that's what I figured.

My other half LOVES Sheila from Dungeons in Dragons and got quite hot under the collar when she leapt onto a horse in one episode and flashed a glimpse of white knickers...

Pocahontas always floats my canoe. Great hair AND eco friendly. She can borrow my colours to paint with if the wind gets the hump anytime.

Seriously though. Pixar scripts are superb. Toy story 2 "He's in mint condition" is one of the saddest lines ever written.

Or Mrs Potato head "I'm packing an extra pair of shoes, and your angry eyes."

To understand and make the specific context of these films work so well is to be studied and admired.

So go tell your son to put the DVD on again.

(after all, Sid the Sloth is my personal spirit guide )

This is SO not just a guy thing! I did this when I was a kid, and I still do it. My first crush ever was Peter Pan. I still have a thing for pointy ears. Elastigirl is SUPER hot by the way, good choice. Anyway, I've always figured Disney has a little for everyone. Their movies are fun and understandable for the kids, and also feature some eye candy and funny dialogue for us parents. Win-win!

I've never paid attention to the music on Ice Age 2 as the plot was not as good as the first one. I may have to re-visit.

My last two DVD purchases: WallE and Up!. And we don't have anyone younger than 15 in the house....

Rebecca: it's the length of his vine, right?

Keith: I made this herd and it's about time you started showing me shome reshpect!

Adrenalynn: totally... and I have to admit that Tinkerbell is pretty hot!

Nota Bene: Jessica Rabbit is certainly one of the most pneumatic cartoon creations... and definitely a good time, gal. I wonder if she'd prefer the carrot or the stick approach...? I guess it's a no-brainer.

Steve, all I can say is that just because your "son" watches cartoons all day doesn't mean you have too...

Also have you seen Megamind? Move over Elastigirl, "Roxanne Ritchie" is the new chick in town!!!!!!!

Joe: Roxanne Ritchie, eh? Haven't seen the movie yet but have just Googles the aforementioned Roxanne... maybe she and Elastigirl could double-team me? Now, that would be an animation!

"I don't know about you guys, but we are the weirdest herd I've ever seen."

Keith: "Sid, if you don't shut up I swear to God I will fall on you again and this time I will kill you."

It was videos when my two were young, so you had to rewind the damn things. I still have Jungle Book, but the last few minutes are sooooo stretched, even Elastigirl's eyes would water. I can see why she would have caused so many tribute pictures though - and it is a great film too. I cried in Up and Toy Story 3, both seen at the cinema. And I bought Wall-E because I loved it so much.

Alienne: must admit, I haven't seen Up but the Toy Story films are, without doubt, brilliantly scripted.

Yeah we had videos too that just didn't ever rewind fast enough.
My son watched Monsters Inc a gazillion million times, he didn't stop until about 10 minute after I bought him the Pjs/dressing gown/duvet cover.......
It IS really good though, and Toy Story 1, I loved, I loved it over and over...

MissBehaving: yes, we rate Monster Inc and Finding Nemo too. Plus all the Shrek's though the first two are by far the best. We're a complete Pixar family.

The incredible incredibles. After the original ‘Jungle Book’ animation movie, this is for me the new daddy of them all. Too many superlatives to list. Suffice to say you can perve off as much as you like about Elastigirl, but the one that did it for me was ‘Edna E Mole’. With her cute little nose, authoritarian manner, those oh so sexy owl glasses and that thwacking stick like cigarillo extender she so dominates with in every scene she’s in.

And then there was the pumped up pinky busty blonde in 'wodger wabbit'- now there was a toon that ruined a perfectly good pair of Y fronts.

Phil: Edna E Mole would be a cool toon friend to have - lots of kudos to have her in your friend armoury but Elastigirl is the uber babe for me. I'd like to stretch her into some new positions and then some...