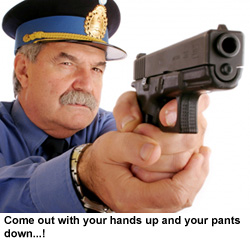 Yo. Rookie. Get your butt over here.

See this badge? I’m DCI McBlake and I’m gonna be the mutha who’s gonna be ripping off your head and spitting down your neck for the next 3 weeks until this case is closed. Capiche?

Whazzat? This ain’t the 80’s no more, you say? Wise guy, huh? Just push your jacket sleeves up to your elbows and walk your cheap loafers over here. You might learn something.

See, that there? Know what that is? A toilet stall? You’re half right, bozo. It’s a crime scene is what that is. This is the crime that has got the boys in the lab clawing their eyes out through their Medisave goggles.

We’ve lost approximately 14 this last week alone. Bodies? Are you nuts? Does this look like a homicide investigation? I’m talking loo rolls, son. Bog paper. Hole roll. Shit ticket. Some scrote has been coming in here, breaking into the loo roll dispensers and walking out with bog standard (if you’ll excuse the pun) 2-ply toilet paper and leaving the other patrons wishing they’d worn a longer tie to work today.

This situation cannot be allowed to continue. It is our job to track down this Izal sniffing pervert and see that he is appropriately apprehended and his paper snaffling days put firmly behind him. If we don’t we’ll be looking at a skid mark epidemic the like of which the world has never seen. Before you know it there’ll be a shortage of haemorrhoid cream and Top Man boxer shorts and then where will we be?

Back to Y-fronts is where. Try and keep up with me, son. Geez, I thought you were on the fast track straight out of Hendon?

I want these stalls dusted for fingerprints. I want casts made of the shit prints. I want DNA samples taken from the various effluvia that you see deposited around the toilet bowl. And yes those pipettes are standard issue. Get to it, son. I don’t keep a dog and bark myself.

Now to catch our man we’re gonna have to be a bit clever. We’re gonna have to get inside his head and think like him. Why does he want all this toilet paper? Could he have a bad case of Delhi belly? Well, it’s possible given the proliferation of curry houses in the district but when you got liquid fire running out of your bomb bay doors the first thing you reach for is an ice pack, not cheap loo paper made from recycled packing crates. Could he be selling it on the black market? It’s possible. Check our database for any Andrex puppy owners who are known to be making loo paper adverts at this current time.

Has he got some kind of weird sexual loo paper fetish that makes him want to insulate his entire body the better to contain and preserve his pubescent secretions? You betcha bottom dollar, kid. No, no need to say it. I can see we’re singing from the same hymn sheet. I can see that disgust written large all over your face. Well, maybe, just maybe there’s something about you after all, son.

So we need to trap this dirtbag. We need to get him to reveal his identity so we can swoop down on him like the ungodly angels of vengeance that we undoubtedly are. It says so right here on my Met badge. Ungodly. Angel. Of. Justice. Whoops, sorry, kid, that’s my Blockbusters membership card. Never mind that. See this? Know what this is?

No, it ain’t marijuana. It’s itching powder. Itching powder, dumbass. You get sprinkling it all over those loo rolls and then stick ‘em back into that there loo roll holder.

Some poor fool is gonna have himself a crack attack so bad he’s gonna rip a 5ft hole into his own arsehole. And when that happens we’ll be right here ready to jump on in.

We’re gonna get covered in glory on this one and no mistake, son.

Why you looking at me like that? Just button your lip and get sprinkling.

Boy, I could sure use a chocolate donut round about now...

If the culprit were actually shitting in the loo he wouldn't want it to run out of loo paper. This McBlake is no Sherlock Holmes. What's required here is a stakeout. I suggest you trim your beard and hide in the broom cupboard.

Gorilla Bananas: you mean trim my beard in case I get mistaken for a broom, don't you?

Lol........are there cameras in that bit of the building?

Libby: it is against the law to install CCTV cameras in public toilets and secret policemen's balls.

I want to know how you know there are 14 rolls of loo paper missing.

Are you the company's bog roll monitor?

How many cubicles are we talking about? Is the theft confined to male toilets or are the women's loos similarly attacked?

You mention Izal paper ( of treasured memory), I thought that had been banned - too long a stopping distance - just look at the skid marks.

We once had a mega turd crapper, is he on your data base?

Marginalia: yes, I am the company's bog roll monitor - it is the highlight of my job. No, seriously. We're talking 2 cubicles, both in the Gents. The Ladies so far has been untouched by the profane hands of a thief. You can't ban Izal - it's what made this country grate. We've got a fix on mega turd crapper; if he chops a log anywhere in the vicinity we swoop on him like flies on... er... shit.

( trying to get your head out of all this scatological distraction )

Try dipping your stocks of bog rolls in a clear superglue for a week. Then set up a discreet mini cam aimed at the store cupboard.

“leaving the other patrons wishing they’d worn a longer tie to work” I nearly pooped in my thong on that one. Epic!

Phil: nice idea but it might result in the me, the cleaner and the bog roll delivery man becoming rather better acquainted that we had previously planned. And you nearly pooped in your thong? Wouldn't that give you a split end?

Somehow you've managed to make the idea of chocolate doughnuts very unappealing. Is it possible that the twit who was T.P'ing houses around here came over to your place for supplies?

English Rider: you may be right... but I'd love to know how he got all that paper squished up into his hand luggage.

It's a shit job but someone's got to do it.

Löst Jimmy: I'm soft and strong and I go on and on.

Maybe he`s using it for tracing paper - that`s about all `Izal`s` good for, surely?

Nana Go-Go: why would you trace your arsehole when you can make a rubbing?

I'm sorry McBlake, but I see a flaw here. No company on this planet would supply 2-ply tissue for their workers. Unless it's in the union contract, I suppose.

Wanderlust: not so fast, detective. These are the public toilets. They get 2 ply. Us workers have to make do with the torn up pages of the Health & Safety Policy in the staff loos.

I was going to suggest you should call in Columbo but he`s departed to the Great Detectives` Hinterland....I haven`t worked out whodunnit yet...I missed the beginning.
Talking about tracing arseholes, I see He Who Hates American Ladies is still doing the rounds. I`ve just spotted his comment on one of my Lovely American Bloggy Friend`s blog. I was going to say `heads up` but that would`ve looked wrong in the same sentence as `arseholes`. Good weekend to ya my bloggy friend.

Nana Go-Go: yes, Mr Boycott American Dames tried leaving a comment here too but I deleted him. There's enough shit in this post of mine as it is! ;-)

Not sure which made me laugh more - the picture of the cop who is blantantly Jimmy Greaves, or the longer tie pun.

Seriously though, I bet the thief has a small child's birthday party coming up and is using it for that mummy game.

Either that or someone has stolen them to chuck at U2 at Glasto - preferably after they've used them.

you should probably invest in those bog roll dispensers that you can't steal the roll from. Except that they cost an arm and a leg!

Very Bored in Catalunya: nicking bog rolls is a funny old game... If they'd said they wanted them for U2 I would have gladly given them my own personal supply (used).

Emma: are they the ones made out of old Sherman tanks?

Why don't you get your hands on some of those exploding ink packs that banks use ??? Or better yet, a couple of GPS trackable chips...

Once you get a fix on their humble den of thieves, that's where your flame thrower comes in, which you wield with a shit eating grin...

Stealing the loo paper from a public loo, that's about as low as they come, lower than whale excrement...

Owen: you are a mine of incredible information. I can think of about a dozen applications for those tracking chips that would make my life so much more fun.

Oh dear, things are really economically downcast world wide then eh? Is nowhere safe, what is the world coming to when someone nicks the pooper scooper!!
Good luck with your detective work, no wee job that! (And it's not me, cos we won a years supply of the stuff in March....)

Amanda: OK. That's one person off the suspects list. But what about the competition organizers? Where did they get their prize from? That's what I'd like to know! Has your loo paper got my name written all over it?

I know there's a recession on but that's a lowly crime indeed. Below the belt, some might say!

Laura: is nothing sacred? Not even our toiletries?!

I was going to apologise for being behind on your blog...... but given the subject of this post, that would possibly make me a suspect.

Actually, I'm still stuck back on the image of little (or perhaps not so) poo-castes being made and forming part of your work-up of the crime scene.

And how is it that the comments are consistently as funny as the post itself?

I'm soft and strong and I go on and on.

Can't stop giggling at that one!

Being Me: my wife constantly bemoans the fact that I go on and on and bloody on. ;-)

Should I ever have genuine cause to make a poo cast I shall YouTube it for you. Or should that be PooTube?