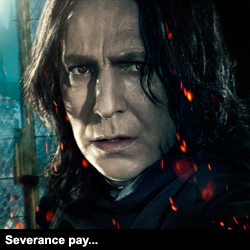 But I don't think the influence that the Harry Potter stories have had on such a wide demographic - and for so long - can ever be denied.

I am not one of the detractors. I loved the books though freely admit the first two are overly simplistic. The films I have always loved unreservedly. I don't know why but they evoke the mood of a Christmas holiday in my house. Something special and comforting. Rowling has done what all writer's dream of doing (even if they don't admit to it): creating a world that the reader wishes to lose themselves in completely.

It's been a long journey to get to this finale. Over a decade. It hardly seems possible. For me the films have maintained a consistently high standard all the way through and though many felt The Deathly Hallows Part 1 was a let-down I was not disappointed. It was faithful to the book and served its purpose well - to whet the appetite for this: the mother of all showdowns.

The Deathly Hallows Part 2 is a huge film. All the planets are in line. It is a cataclysmic event. All loose ends must be tied up or tied off. There are deaths a plenty. This is the war that has been brewing around the edge of the Harry Potter world since the first story.

There has been much talk in the press and the media about the significance of death in the Harry Potter stories. Rowling herself has been quoted as saying that Death is on every second page of the books, always there, waiting, driving, steering.

I suspect this is part of the appeal of the Harry Potter world. Like all fairytales it has a hidden subtext, it deals with subjects that children - God, even adults - find difficult to deal with and puts them into a context that makes them slightly more palatable; that at once removes them and draws them intimately near at the same time.

Death, when ideal, should be seen as an old friend. Not necessarily an enemy...

And so to the film.

Gripes, if any gripes I have, are few and far between and tiny. I wish more had been made of Maggie Smith (Professor McGonagall), Alan Rickman (Severus Snape) and Julie Walters (Molly Weasley). They are damn fine actors and it is a shame to see them reduced to cameos. But they are not the main protagonists so I can understand why the editor's scissors treated them so harshly. Rickman's Snape has been voted the best Harry Potter character in some survey or other this week. Now that his story is fully told you can appreciate why. Rickman's performance has been brilliant, moving and subtle throughout all the films, yes, even despite his Boarding School teacher sternness. His tragedy has been written on his face from day one. His death and 'redemption' are emotively handled. As is Harry's realization of what he really is and what he must do. These are big issues for a children's story to be dealing with but they are handled with aplomb.

I wish the dual between Molly Weasley and Bellatrix had lasted longer - a small complaint really. It was a long time coming and so, so right. But again... time contraints no doubt played their part.

On the whole the film stays true to the book though there are a few omissions - Harry making peace with Creature; the revelation that Harry's sacrifice effectively does for everyone at Hogwarts what Lily Potter's sacrifice had originally done for Harry: render them all untouchable to Voldermort; Neville Longbottom's partial strangulation with the Sorting Hat... but these, I guess, can be left out. They don't create huge gaping elipses that punch holes in the plot. Other bits are added: the battle with Voldermort's snake, Nagini; Harry's final dual with Voldermort is elongated and run through the length of Hogwarts and yet the final denouement takes place in isolation, away from the eyes of onlookers (in the books it is in full view of everyone).

But none of this spoils the film. It is a visual and emotional spectacle. It has been many years since I have watched a film at the cinema and witnessed spontaneous cheering and applause from the audience. You can guess which bits prompted this: Ron and Hermione's kiss and Neville hacking off the head of Nagini at just the right moment.

The film is one long build up to an almighty, world changing crescendo.

In the peace that falls afterwards one feels sated, satisfied but also oddly bereft. It has been a long journey. An enjoyable journey. And now that it is over one feels sad and a piquant sense of loss.

A whole world has ended happily ever after.

One must say goodbye to an old friend.

A wonderful review Steve. Thanks for it. I won't manage to see this final installment for some weeks alas.

Löst Jimmy: it'll be worth the wait and every penny of the cinema ticket when you do.

Nice try, but nah...not for me I'm afraid. That siad, I did play Lego Harry Potter on the Ninentendo and actually quite liked it.

I am afraid to say (and you may now refuse to ever visit my blog again) that all I have tasted of the Rowling oeuvre is the first book which I found funny and a good read. But I've never put aside time since to either read the rest or watch the films. I know, I know - call myself an English teacher?

Fran: and yet the first book is probably the weakest and least satisfying... you've got some catching up to do.

Agree with you about Alan Rickman - stunning actor. The thing I really love about Harry Potter is that it's given all these superb actors some good steady work. I hadn't seen Alan R. in anything since "Truly Madly Deeply" until HP came along...

About Last Weekend: and now that it's all ended there's going to be a lot of waiters and waitresses with very familiar faces...

I saw it this evening and I agree, it was excellent. And my two girls, having grown up with Harry Potter are now really sad that there are no more films to look forward to. I suspect we will be going back to see it again.

Have you seen Alan Rickman as the Reverend Obadiah Slope in episodes 3-7 of The Barchester Chronicles? The Bishop says, and I agree with him, that he's a thoroughly bestial creature!

Alienne: I know precisely how they feel.

TimeWarden: this is something that I have completely missed. Sounds like it's worth picking up on DVD?

Absolutely! Alan is terrific in it. Very slimy. I think it's his best performance and his scenes with Mr. Quiverful (so named because of his virility) are a treat.

Stevie babes - you are wasted in your current job. You deserve to be a professional film critic.
And a very highly paid one, of course. That goes without saying.

LCM: you have just become my bestest friend.

I like the HP books a lot. I don't mind the films but mainly because I like the adult actors/characters. I do not like Harry and Hermione, not even in the book. Maybe I just envy their millions in the bank inspite of their very bad acting...Snape/Alan Rickman is my absolute favourite. I cried a lot when he was killed in the last book. I expect I will cry even more at the cinema. My daughter's favourite is Voldemort/Fiennes. I guess she hasn't understood the plot properly...Or maybe she has? All the best. Ciao. A.

Lunarossa: their acting (the young uns) has improved greatly with each film over the years and I think they've done a bloody good job with The Deathly Hallows. I find Daniel Radcliffe a bit weird - a bit too hyped up in real life. Emma Watson I think will go far. She's very poised and very sussed. Good for her. I know what you mean about the adult actors though. Alan Rickman is a tour de force. His death scene as Snape is very moving. Bring a hankie or three. Oh and Fiennes is brilliant too - he revels in his role.

A wonderful mini dissertation of the Potter fables this, for which I am very much with you all the way. I have yet to read any of the books, but I started to collect the DVD’s a few years ago, and I’ve become a keen spectator and admirer ever since. I still only have a rookie’s basic gist of the overall storyline and characters, but I’m quite in awe of the visual spectacle the films dish up for me to tumble all the way into.

The set design & production is a masterpiece of richly creative brilliance at the highest level of film making, and is uniquely deserved of a fourth Michelin star. I find myself watching each film several times over just to satisfy myself that I haven’t missed something clever and inventive going on somewhere in the screen.

The line-up of most of our finest Uk acting talent on show in each film is quite mind boggling. I feel sure that most of them would do it for free if they had to. It would almost be embarrassing to be a good British actor and ‘not’ be in the franchise.

It’s like the whole Peter Pan thing, in that it’s so unctuously and enchantingly, quintessentially British.

I’m totally with you regards Alan Rickman. First time I saw him I genuinely thought he was a new and emerging German actor in Die Hard 1. Then he turned up again as the meanest, coolest, baddest Sheriff of Nottingham there will ever be, and promptly acted Kevin Costner & half his merry mericans, all the way back to the Alamo.

I understand that slightly sad feeling of bereft you described at the end. I still have a few more films to get through before I catch up with the ‘finale’, but I have no doubt I will experience much the same when I do. Oh to have been a ten year old when ‘The Philosopher’s Stone’ arrived to the screens. The stuff of magic.

Bish Bosh Bash: totally, totally agree. 100% (or in The Apprentice parlance 110%). I think both Rhys Ifans and David Tennant have both said that appearing in HP is like getting your acting wings. You know you've finally made it. All those young actors will look back one day and see how blessed they were in adult co-stars. All that acting experience at their fingertips, all that free advice and protective camaraderie. So lucky the lot of them and yet so seemingly unaffected by it all. As you say: the best of British. They done us proud, gov, they done us proud.