Raiders Of The Lost Doggy Hat 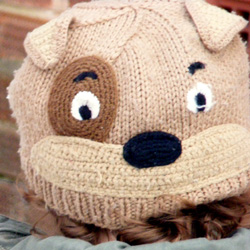 It's not often I post requests for help on this blog. It's not often I post an all-points bulletin in such a global fashion. But the snooty people at BBC news have refused my request to borrow their satellite link-up and Claire Marshall for a few hours to advertize my campaign.

I'm having to utilize this space on this here blog of mine to send out a request for help.

Shit. I don't even know if it'll work. I don't even know if you guys will be able to help. There's so much stuff going on in your lives right now - personal shit, work shit, financial shit, looting shit and (for those of you that did the former) prison shit - this request of mine might be the straw that breaks the camel's back. It might be a bridge too far. Or even just a metaphor too far.

It's my boy, you see. My youngest son, Tom. He used to have this doggy hat. You can see it in the photo above. We're not sure where it came from. It was given to us and, well, Tom and the hat just kinda bonded. They went everywhere together. They were inseparable.

Well. Inseparable apart from the occasions when Tom would hoof doggy hat out of the pushchair at passing traffic but I'm pretty sure doggy hat was complicit in these al fresco outings.

One day the inevitable happened. Doggy hat made like a Frisbee while mummy wasn't looking and he got left somewhere. Abandoned. Lost.

Now, whenever the wife and I find lost but plainly cherished items in the street we tend to leave them where they are. Our reasoning being that whoever lost said item will retrace their footsteps in the hope of finding it again.

We therefore retraced our footsteps but doggy hat was gone.

Someone - some opportunistic little thief - had said "finder keepers, losers weepers" and doghat-napped doggy hat for themselves.

Tom was distraught. We were upset.

We figured he'd get over it, forget it, move on. But here we are, nearly 8 months later, and Tom still talks wistfully about his doggy hat. He wonders where it is. We've told him some kindly people are looking after it for him. He wonders if doggy hat will ever come home again. We shrug, swap furtive looks, and say that we hope so.

Today, things progressed further. Tom woke with tails of Mr Tree Branch tapping his window in the night to tell him that he'd "taken doggy hat up into the sky".

So this is a request - a cry for help - does anybody know where we can buy another one of these blessed doggy hats? Does anyone have one that they'd be willing to sell?

We just can't take it no more.

I feel your pain Steve. The Boy was inseparable from his Winnie the Pooh, a special gift from a friend in the US. Pooh got left in the toilets at Heathrow Airport - and possibly blown up in a controlled explosion - but whatever happened, we never saw him again. We told The Boy that Pooh had gone off on a world trip and got friends abroad to send postcards from Pooh while I tried to find a replacement. It took months of subterfuge. Every Pooh was slightly different. In the end I found a suitable replacement. With great ceremony wandering Pooh returned. That night, snuggled up in bed, I asked The Boy if he was happy to have Pooh back. "Yes Mummy" he said "but you know he's not my real Pooh" Buggeration! My mum suggested finding a granny who could knit a replacement. Sadly she is not that granny.

Wylye Girl: regretfully no-one in my family knits and, like your boy, I suspect ours would spot any attempt at subterfuge from a mile away. It's got to be the real McCoy or nothing at all!

Oh, this is so sad Steve. Not much I can do from this side of the world I'm afraid except keep a look-out in case it came down in the latest snowfall...

Lady Mondegreen's Secret Garden: you never know... I suspect Mr Tree Branch has got quite a reach on him...!

I had a similar time when 'bear' went walkabout. Luckily it was from Harrods and they were very helpful in sourcing a new one. It took 2 attempts to find one quite acceptable though but even after all that it was like the relationship had moved on and they never rekindled the same closeness. Bear was very soon ousted for elephant. It was like she needed to show bear she was in control of when he left! I have a zebra hat a bit similar. The Peas Knees sell them online. I would offer him the choice of a replacement he prefers and not go with the lies. Having been through the pain myself, the final outcome was not worth the effort. Fickle children. Good luck.

Kelloggsville: yes, our problem is not knowing who the original retailer was - we don't have a clue where to start looking. Thank you for the Peas Knees tip-off though - will give it a go!

Losing a treasured item is almost a rite of passage. I remember having a little case that I filled with junk and carried everywhere. That's until I left in a shop one day, and someone walked off with it. You could use this to illustrate the value of looking after his things; it's a lesson he won't forget!

He needs to move on. You need to move on. The dog is history. Alternatively, not quite the same but:
http://www.riverisland.com/Online/women/accessories/hats/grey-stripe-knitted-patch-eye-dog-beanie-592192

Tenon_Saw: thank you - you're a mine of unexpected information!

Nota Bene: an uncannily close match... thanks for your input!

pretend it was stolen and write to Kirsty Young on Crimewatch!

John: hey - any excuse to write to Kirsty Young, right?

Oh Steve, good news. I think I saw a hat just like that in a shop in Sydney. If you would just wire me airfare to Australia I'm sure I could procure it for you. I'd even post it to you (at no charge). Because that's what friends do.

Wanderlust: what's so lovely about your offer is that I just know there is no ulterior motive whatsoever! Thank you! Wiring some money across to you right now... do you to take Bank of Toyland?

If I had one, I'd give it to you free and throw in a packet of fried locusts for old times sake. How about hiring a craft blogger to make one for you? Kitty below specialises in monkeys, but she might be persuaded to go canine.

Gorilla Bananas: a generous offer which will not go unforgotten and another avenue to investigate - my thanks.

Oh that brings back shuddering memories...our Scowly Teen had a cloth cow (Moo Moo) that went everywhere, to this day all we have left is very flimsy arm of the dress but we do still have it!However I digress...I'll be out checking the snowdrifts with Lady M. I am sure we will volunteer to bring it over if we find it. :-)

Sorry about the lost 'friend'. I'd offer to knit a replacement but alas it would like to come out all mutated...in a woolly sense.

Oh I wish I could help.....what about posters on lamp posts?

Amanda: that's very kind of you... and you can be assured of a warm welcome from Tom should you find it.

Libby: it's a possibility... but I'd hate people to think I was taking things too seriously. ;-)

Oh you do make me laugh, Steve. Thank you. A Metaphor Too Far - how did you know that was the working title of my book?

I've been up to no prison shit, but I still don't know how to help thee. It is a gorgeous doggy hat. I LOVE that Tom calls it doggy hat. I am easy to please, it's true.

There is nothing much worse than losing the blessedly beloved child's toy "thing". I look at Lolly's dog Scraps sometimes and think, if we lost him it'd be like losing one of her arms. She is THAT attached to him *heaven help us all*

I don't even know what to suggest. Not even sure I'd suggest trying to find a replacement brand new doggy hat.... perhaps he could receive a gorgeous, hard-to-resist new little pal of some kind??

Being Me: a new, slightly different (or even completely different) replacement may indeed be the way forward. This blog post was our last shot at finding an exact replacement... I think, despite some wonderful efforts, the task if impossible. We will show Tom a selection of alternatives and let him choose a new hat for his head. Doggy hat is gone; long live doggy hat.

I've spent a good half hour or more surfing internet for doggy hat - can't find the same one and now really must do something else cos this isn't even on my 'to do' list today!

Poor Tom...no, I don't have a solution, except what about getting a dog?

Oh yes, the hat(or blanket, or scrap of cloth) we've all been through that, I really do feel your pain too Steve. Haven't seen any here in wine country California but will keep a sharp look-out. I do find a couple glasses of wine sharpens the eyes!

The fly in the web: see, the thing with the hat was... we never had to feed it.

You haven't seen my Noddy doll on yer travels, perchance?

Then there was my beloved Gruppo Sportivo t-shirt, from my late teens...

And, at Uni., some unknown blighter swiped Confessions Of A Teenage Hitchhiker from my bookshelf! You'd think they'd be better educated than to want to read such trash!!

Anyway, the list of things that go missing is endless...

TimeWarden: I'm sure there's a blackhole somewhere containing all our missing items... including all the socks that go missing in the washing machine.

Looks to me like poor old 'Churchill' there has got quite a goodly shiner of a black eye. Perhaps there's more to this sad little story than first meets the eye then Stephen? Hmmm.

Maybe you should just try skulking off to your local RSPCA, with a big bag of nice doggy sweets, and see if he's not still sat there pining inside a cage?

Bish Bosh Bash: my biggest fear is that doggy hat snagged a split end on a fence post and has unravelled himself... now that would be a sad yarn to tell the kids...

And there was me thinking I was being darkly evil too!

Bish Bosh Bash: I never could resist an appalling pun.

Mark: thank you - I've been genuinely touched by all the help that has flooded in!