Going Round The Twist 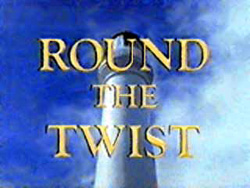 It’s amazing what you turn to in times of trouble. What crutches present themselves. What wild ports in even wilder storms you find yourself seeking succour in.

Some turn to drink. Others to drugs. Some try lighting up innocuous substances like banana skins or dried hummus because they’re too scared to get sorted for E’s and Whizz. A few turn to hallucinogenic combinations of all these in the hope that the absurd cocktail they have created blows their mind to greener grass and a more comforting mental ambience.

Some, of course, seek solace in the wild abandon that physical pleasure can bring. Gorging themselves on fishnet wrapped flesh and the tangy odours of perfumed armpit and crotch. Excuse me while I pause and take a few deep breaths here.

Yes, a person’s elected path of escape says a lot about their character. It is only in extremis that the world sees us for what we really are.

And Lord knows I have needed to seek comfort of late. The recent troubles with Tom’s nursery have nearly driven me over the edge. It has been brinkmanship of the highest order.

You have to believe me when I say I wouldn’t usually have done this. But... needs must when the devil drives. I was pushed to it. And when the chips were down this proved to be the sauce that saved me.

I happened to see the boxed set of all 4 series going for a veritable song on Amazon. Little more than a tenner for all 52 episodes. I bought it instantly and I swear to God that this show has saved me during the last few weeks when things were at their worst.

For those of you who missed Round The Twist first time around, well, I offer you my sympathies. You have been truly deprived. It was originally made in Australia (all the best kids TV shows are made in Australia – excepting The Wiggles) and broadcast on the BBC in the UK back in the early 1990’s. It is just about the funniest, most inventive kid’s TV show ever. Paul Jennings, the show’s writer, is a genius. Each episode is little more than 25 minutes long but is packed with ideas and jokes and (sometimes rather near the knuckle) fun.

I’ve managed to turn Karen and our eldest boy, Ben, into instant Round The Twist converts. For me, it is a real trip down memory lane. Sure the effects are as ropey as all hell and the music dates the show horribly but once that theme tune is stuck in your head it’s stuck in there forever.

After I’ve been laid low with a day’s worth of trial and tribulation, just a quick hit of Round The Twist and I’m right as rain again. I’m reminded that life can be weird and wonderful and fun. You just have to look for it.

And the best thing of all is I don’t have to deviate my septum sniffing coke or wear that damned gimp mask anymore.

If you can’t live in a haunted lighthouse yourself then buying Round The Twist is honestly the next best thing. They just don’t make shows like this anymore. Alas.

Now nick off, you big galah!

I ❤ your TV choices. I loved that show and will now be humming it all day. That is some good TV crack cocaine you have going on there!! I have been hiding in Scrubs and Miranda with a splash of Big Bang Theory.

Never heard of it. I'm sticking with the illegal substances and diseased prostitutes...

Can I put a twist of lemon in my gin while I watch ???

MMM: yes to Scrubs and Miranda... never tried Big Bang Theory. Am I missing out?

Owen: ou can put a twist of lemon wherever you like... as long as I can watch.

I absolutely loved that series - probably the best thing I ever watched on kids' TV with my two. And by a strange coincidence I too bought the boxed set a few weeks ago. It's sheer genius!

Alienne: really loving it so far... just up to series 2; where are you?

Yeah, you could pass for an Australian with a Crocodile Dundee hat on your head. A sheep-groomer rather than a sheap-shearer.

Never heard of this particular series, however I am interested to find out more about the availability of "fishnet wrapped flesh"?

Gorilla Bananas: would you like a bob or a perm?

video and men
go together like paper and pen!

I never watched it. I avoided it diligently. Because I was in "that" phase of my adolescence and it seemed juvenile.....

Now, though, wa-hay! Let me attit! If it's good enough for you and Alienne, I'd best be getting myself a copy!

Being Me: I feel shocked to my core. Like one of the pillars of my life has crumbled into dust. I was sure you'd be the one singing it's praises and giving a full synopsis of each episode. You didn't watch it? You were too cool for Round The Twist? Shame on you! ;-)

That gimp mask's been looking pretty tatty anyway. I was going to buy you a new one for next Christmas.

Sorry not to be around and commenting for a while. I've been embroiled in in a mixture of personal, work and writing stuff for a couple of weeks.

Never heard of RTT - bet my kids have though

Sounds like a way of life for me!!
Bring back the Wombles I say. :-)

Mark: it wouldn't surprise me in the least.

Amanda: it would all be CGI'd these days; it wouldn't be the same!

Yes, but you need to start at Season 1 and work you way through.