Sympathy For The Devil's Relatives 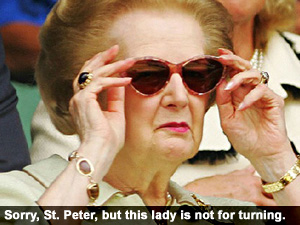 I loathe all that Thatcher stood for. I loathe all that she did from fucking over the Unions to dismantling the NHS. I'm old enough to have lived through her entire time in office from barely being politically aware when she first gained power to finding myself steeped in the very British cynicism with which we tend to view those we elect to govern over us.

Because of Thatcher I have an innate, unthinking distrust of the Conservative Party. This is not a good thing. A political choice should be a cerebral, logical, thinking process not a knee-jerk reaction whose root is in negative gut instinct. But it's there. I cannot, will not ever vote Tory.

She left an indelible stain on British society. Her legacies are still insinuating themselves within the contemporary political process and the very fabric of our society. None of it, in my opinion, in a good way.

But I am genuinely offended by the furore surrounding the "Ding Dong The Witch Is Dead" track which is - quite naturally perhaps - storming up the music chart.

I am disappointed that the BBC hasn't made a definite clear decision regarding the idea of playing it on its own chart show.

Either play it or completely ban it. But don't go all wishy-washy and say you'll "only play 5 seconds within a journalistic context". That's a cop out. That's not even an attempt to please everybody. It's an attempt not to offend anyone too much.

Show some balls for god's sake.

Don't get me wrong. I get the humour behind the record (is it even a record?). I get the desire to cock-a-snoop at the ludicrously patriotic outpouring of verbal laurels that various public figures are heaping onto Thatcher's memory. I get - feel part of - the sense of satisfaction that someone who was so largely reviled is no longer among us.

But to me that reaction should be a relatively private thing. It is my own private response. Great if other people feel the same but should it really be ramped up into some kind of public movement?

Because the simple fact is - regardless of how we feel about them - someone has died. They're not here anymore. All these outpourings of admiration and revulsion are not going to make a blind bit of difference to them.

But it is something that is going to deeply affect the relatives who are left behind and those who had a personal relationship with Thatcher. Are they to be held accountable for her actions? Do they deserve to have to wade through and deal with this public outpouring of hate when they are mourning someone close to them? When they are about as vulnerable as it is possible for a human being to be?

It seems to me to be a very un-British thing to spite someone who is grieving. It is not decent. It is not admirable. It is, I am sure, not something we want attributed to the traditional idea of what it means to be British. It does not sit well: stiff upper lip, nice cup of tea, head down and soldier on, make the best of a bad thing, oh and sneer and heap misery on those that are grieving.

Thatcher, in her political lifetime, dismantled much of what was great about being British. Let us not sell our souls on top of this just to revel in a victory that, when you think about it, is not even really ours.

There is much still to be angry about. Thatcher's / The Tory Party's on-going socio-political legacy. The stupidly lavish funeral arrangements and the inevitable cost to the Great British tax payer at a time of stringent national austerity. But the death itself?

There is no place for anger or prideful victory in death.

Let us make our snide jokes quietly amongst ourselves. Let's play the stupid "Ding Dong" record in private.

But for God's sake let us let those who have a genuine right to grieve, grieve in peace.

Their shoulders should not have to carry the weight of a modern democracy that is kicking itself in anger for making a bad choice three decades ago.

Agree with you wholeheartedly on this one. It's not right.

Being Me: thank you, chuck. And nice to see you back!

Not wanting to get into a political debate over this on your blog but the Unions, especially Scargill who baled on the Miners in their hour of need, did a pretty good job of it themselves. Anyhoo, I totally agree with you on the privacy front.
Have a good weekend,Mein Host.x

Have you heard of the counter-movement to get this punk rock number into the charts? A more fitting British response than 'Ding Dong', because the band were obviously being ironic. You can take it literally or sarcastically, depending on your political outlook.

I loathed Thatcher and all her works....but it is not decent to behave as people are doing.
Lining the road of the funeral procession and turning your back seems a good idea though. Dignified way to make your point.
And as for the BBC...what else can you expect from them? Can't you just see all the meetings and committees and quiet words in ear in the corridors...when all it takes is for the new chief to say that they are or are not playing the blasted song.

Gorilla Bananas: morbidly unrequited love or a paean to necrophilia... I'm not sure how to take it.

The fly in the web: I guess the BBC were afraid of accusations of political bias is they banned it or even of guaranteeing it the number one spot as people would inevitably react to the ban by downloading it more. I like the idea of people turning their backs though. That's far more British!

Hmmmm not sure. I think her family will probably already be used to public loathing, this is not a new response just a regeneration of burning embers of a fire that has never gone out. She had no caring for miners families that were struggling to exist and only agreed to put some money back into Liverpool when it looked like the masses were revolting (and that wasn't just the shell suits). She will presumably have had in the back of her mind always how her actions an policies might have affected her family, as in not at all being as they are steeped in private wealth. I weep no tears, I buy no records but if I wasn't working I would hop on a train to London to shout 'Maggie, Maggie, Maggie, out, out, out' just once more for fun. Not sure whether I would be shocked if she popped out of the coffin at the command or not. I am incensed at public money being spent on a funeral when it has never been done for a Prime Minister since Churchill (and that was different as he headed both parties). I look forward to Tony Blair getting the same treatment but I bet he doesn't and that is what makes this all so wrong.

Kelloggs Ville: I agree with the protests about the funeral expenses - I think it is an outrageous waste of public money. As for the rest, "Maggie - out"? She's about as out of it now as it's possible to be. She's not hear to soak up the bile. Waste of a good shout in my opinion.

Kellogs Ville has expressed my feelings quite nicely (thank you KV!). I was 12 when Thatcher came to power. Her corruption of St Francis of Assissi's prayer caused my Father (a British Leyland Engineer) a near apoplexy. he shouted so loud and long my Mother thought he would have a stroke. Thatcher left me with an instinctive implacable hatred of the Conservative and Unionist Party (as they are known at the ballot box in Scotland). I will never vote for them. I was born and brought up in a mining/steel community - riven apart by the consecutive strikes and closures and redundancies. Cushioned a bit by the policies of vast Strathclyde Regional Council. I actively campaigned against Thatcher/her party in the years from 1983. I despise what she stood for - what they continue to stand for. I was a bit surprised by the organised parties and the Ding Dong song. I'm old enough and weel brocht up enough to feel a bit of moral discomfort that folks are celebrating a death - despite the grief of relatives. But having given it a bit of thought I'm not unhappy that others have reacted in this way. Did Thatcher give a rat's arse for the victims of Pinochet's regime (the wonderful Neruda now suspected to have been among them)? Did the braying right wing trolls think twice about their response to Chavez' death?
My deepest sadness is that Thatcher continues amongst us. From Blair and the Blairites to Cameron and Osborne et al. She might be dead - but her legacy is the right-wing gift that just keeps on giving.
I'm sorry to be such a bore with this - I'd promised myself (and those who know me well!) that I'd said my last word on 'the Thatcher thing'. But your post was a good 'un! Thanks.

y.s.s: agree totally. I can understand and even feel some of the sentiment but the moral discomfort is something I cannot shake off. And I'm glad that I have it. It was possibly something that Maggie herself never had...

Surely the time for protest was when she was in power. No when she's cold and dead.

I also think marking her passing with a quasi State Funeral is over egging the cake.

However, whatever one thinks about her and her politics, she was a remarkable political figure who had an enormous influence here and further afield.

That said I have an undying antipathy for New Labour and Tony Blair especially. Maybe I'll be dancing on his grave when he goes to meet his maker.

Given that I've just left the Beeb, I can fully imagine the numerous meetings and raised voices that will have taken place in coming to the decision they finally made. It wasn't a good one but to be fair to them, in the current climate they are damned if they do, damned if they don't. I think the fact that it was a concerted campaign that took this song up the charts is what skewed it all but banning it would simply have created more sales ...and more heated discussions !! Great piece though

Marginalia: yes, Blair is worse in some respects. I expected crap of Thatcher and got it. But Blair promised much and betrayed that promise.

rjchery: yes, you're probably right. Banning it would have had the Frankie effect on it and guaranteed it the number one slot beyond all doubt.

I'm a child or adolescent of Thatcher, I served in one of her wars and carried out some of her governments' laws...yet I won't grieve for this ideologue. A friend of Pinochet is no friend of mine.

Löst Jimmy: I'll certainly not grieve for her either. But those that want to have the right to.

Good points well made. I heartily agree. I had no more liking for the woman than you, but she didn't listen to her electorate in life and I'm sure as hell she doesn't give a damn about them and what they think of her in death!