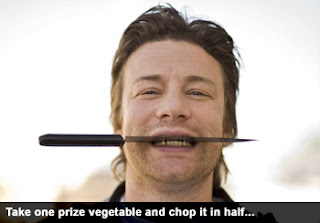 In a move guaranteed to ensure his twatdom for evermore, “cheeky chappy” TV “chef” Jamie Oliver has claimed that an unhealthy packed lunch is on a par with child abuse and the providers of the packed lunch – the hapless parents – are the abusers.

Being a regular internet surfer my sensibilities have long been bludgeoned to insensate dullness by the proclamations of idiots and emotional amoebas the world over but even I, desensitized oaf that I am, found myself reeling in shock at the sheer magnificent idiocy of Jamie’s latest outburst. It is idiocy on an Olympian scale. Stupidity big enough to gag a black hole.

Jamie needs to take the same care over what comes out of his mouth as to what he puts into it – and wants to put into ours.

A packed lunch, no matter how comprised of donuts, lard sandwiches, liquefied sugar and cholesterol shakes, cannot in any way compare with child abuse.

Does Jamie need to attend a corporate training course on what child abuse actually is? You’d think with Operation Yewtree currently decimating the BBC’s summer programming schedule, Jamie would be a bit more clued up. Maybe the BBC could spend some of our license money sending Jamie off to make a programme about child abuse and how learning about it affects him and, of course, he can throw in a few recipes for conciliatory vegetable and nettle smoothies while he’s at it to make the kids feel better about themselves? Except the last thing those kids need is king dickhead Jamie Oliver criticizing them over their choice of comfort food.

Most bad packed lunches are not formulated by parents setting out to wilfully harm their kids or even by parents who take evil, predatory pleasure from stuffing their kid’s Power Rangers lunch box with enough fat to make a McDonald’s burger feel positively anorexic. Most of the time a bad packed lunch occurs due to ignorance, poverty and, let’s not overlook the biggy, the fact that the child in question refuses to eat anything else to the point where the family’s own doctor advises them to just let him / her eat whatever the hell they like just as long as they are eating something and ingesting enough regular calories.

And what about those ordinary families who occasionally slip a treat into their kid’s lunch boxes? The occasional Mars bar or Twix? The infrequent chocolate mousse? Is that child abuse too? Or are we just the equivalent of chat room “lurkers” grooming our kids for worse things to come? Sucking them into an underground world where their dependency on chocolate and sugary drinks will make them easy prey for Machiavellian techniques to make them more biddable in years to come? “Do the hovering and there’s a Milky Way in it for you, son…” Christ. I’ll hand myself over to the Yewtree investigation squad right now, shall I?

Dear Jamie, do you know what one of the most soul destroying aspects of child abuse is?

Guilt. Being made to feel guilty about something that wasn’t your fault and something that you could in no way have any responsibility for. Abusers love guilt. It really does make those in their power more biddable.

Guilt is a nasty, insidious thing when it is not deserved (but nevertheless keenly felt).

Spreading it about and using it as a leverage tool to sell your own branded personal ethos to the country and bolster your flagging celebrity status is abusive in the extreme.

Isn’t it about time you turned yourself in to the cops, Jamie? (I hope one of them fucks you over with a Curly-wurly.)

Got to you then did he?

What have you got against Curly -wurlies?

He must now win "Tosser of the Year" title.

Marginalia: tosser of the year? He'll take that as a compliment to his salad making skills, I'm sure.

You could argue it's the best protection against child abuse if it makes the child fat enough to be unattractive to pederasts. Maybe his understanding of child abuse comes from 'Hansel and Gretel', where fat children get eaten by a witch.

Gorilla Bananas: only a truly stupid chef who makes his living from selling food would object to fat kids...

Perhaps he'd prefer parents to furnish their offspring with Jamie Oliver steak sandwiches at twenty pound a pop as on sale (but little sold) at Lords during the first Test Match....

Suggest he reads the paedophilia posts on The Slog to see what child abuse is about.

He should have taken a different tack entirely...just another bloke with foot in mouth disease...

I ate packed lunches during most of my early school years because there was simply no other way to get lunch at school...I don't remember anyone dying, getting fat or any parents being accused of anything untoward regarding a child's diet. We did get milk or juice.

As for fat children being unattractive to pederasts, the truth is, all kids are at risk if there are pederasts about, whether the kids are fat or not is irrelevant.

The fly in the web: couldn't have put it better myself.

e: true, diet has little to do with sexual vulnerability and the two issues should not be mixed just for short-term media gain. I ate packed lunch too and was just grateful to have some food at lunchtime. My parents catered to my tastes within reason but I was a very fussy eater and wouldn't have touched Jamie's offerings with a barge pole... I would probably have ended up in hospital with malnutrition.

He's a pillock and becomes more of one each year as his ego inflates. I suspect that he's surrounded by too many "yes" men or women and has lost track of reality. The £20 steak sandwiches at Lords got my attention in the press too. A pillock... I rest my case.

Craig: I find it difficult to pick holes in your reasoning.

I miss the old Jamie Oliver who would stumble over his words and had to constantly be prompted by someone behind the camera. This new one who makes stupid comments like that is getting on my nerves.

The phrase 'engage brain before inserting foot into mouth' (mmm, yummy, I'll eat anything)comes to mind. He should be careful about what he says and how he says it...

About the nearest I came to being abused was being made to eat stuff I didn't like. If he'd been around then, Master Oliver might have been my nemesis.

Kellie: better an innocent fool than a know-it-all idiot.

Nota Bene: foot in mouth sounds like something Hugh Fearnly Whittingstall would have cooked up.

Brother Tobias: same here. I hated cabbage as a kid and looking at Jamie Oliver now it hasn't improved with age.

I am not sure I agree... As abuse is not just sexual or violent in nature........
The phrase has been hijacked by the sexual side so to speak.....

John: true. But the phrase "child abuse" - especially in the current climate - has very specific connotations and to deliberately use it in this context, Oliver has shown either a remarkable arrogance or a remarkable stupidity.

I'm guessing he got under your skin a bit there, then. The man is twat. Of this there is no doubt. I'm just thankful that he's a not on our tv screens as often as he used to be.

Heather: every soufflé has a silver lining...

oh god is Jamie Oliver still going? I couldn't stand to watch him throwing herbs all over his loft while he drove around town on his Vespa and spoke in a fake cockney accent. He should be hoisted by his own petard...what would that be some ostrich kebabs?

He talks a lot of rubbish...but that's because he's quite stupid and thinks too much of himself. He is a good cook though and most of my best recipes are his. Sorry!

rjchery: I never eat at your house so I won't hold it against you!