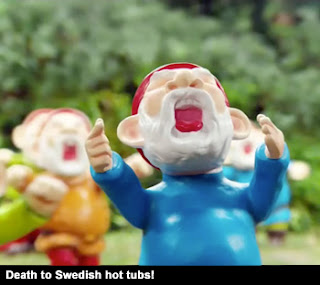 Many of you (unless you live in a yurt) will have seen the new IKEA television adverts that extol us to do away with boring old traditional garden furniture and splash out on some Swedish decking and a hot tub. And by boring old traditional garden furniture they expressly mean garden gnomes (weirdly no mention is made of conspicuous clumps of pampas grass); those poor, rashly fired clay figurines that clearly classify their owner as being (a) stuck in 1970’s sitcom land and (b) pretending and failing to broadcast to the world that they are actually middle class.

The Advertising Standards Authority (ASA) has received a number of complaints about the myriad violent ways Mr and Mrs IKEA are shown dispatching the various garden gnomes that infest their gardens. In scenes that have probably made Oliver Stone puke his ring in sheer horror gnomes have been smashed against garden fences, eviscerated with high powered water hoses and skull-fucked with throbbing lengths of garden hoe.

Actually I made that last one up but it illustrates perfectly the 18+ tone of this gore-fest advertisement that glamorises war and extreme violence just to push a few deckchairs onto an unsuspecting public.
The ASA, however, have decided not to uphold the complaints as they feel that the “clearly fanciful and light-hearted” nature of the advert mediates the eye-wrenching, gut churning gratuitousness of the shlock violence.

Of course, I am joking.

Garden gnomes cannot be killed. They cannot be killed because (and this may come as a bit of shock to the complainants) THEY ARE NOT ALIVE IN THE FIRST PLACE. They are inanimate objects. They are lumps of fired clay cunningly moulded to look vaguely like humanoid figures. They have about as much sentience as an IKEA barbecue fork. They do not have feelings, cannot feel pain and, I am pretty sure, do not have an aesthetic opinion one way or another as to the state of the garden they find themselves dumped in.

People have merely complained because of the anthropomorphic nature of garden gnomes.

Day in day out, all over Greece and in other parts of Europe, plates and cups are being wantonly smashed during the climax of Greek weddings. These poor plates have never even been eaten off; they have been denied the single, defining purpose for which all plates are made. Instead they have been made for one reason only: to be wedding fodder. They have been created to be destroyed, nothing more.

Where are these people when these innocent plates are being killed? Where is the “no plate born to die” campaign in the national press and on the internet? Wasn’t it Roger McGough who once poetically cried, “Monica, think of the saucers”?!

Why do these people not rush to defend these defenceless items of cheap porcelain?

Well, such hypocrisy and inconstancy really gets my goat. It’s time to restore the balance.

It’s time to stand up for teapots, claypipes and ceramic butter dishes everywhere. I am forming The Porcelain Preservation Society and I invite you all to join me in saying no to IKEA and yes to little clay men in galoshes. It’s time to love your mug, savour your gravy-boat and hug your jugs.

If nothing else we will do wonders for the Cornish pottery industry.

Jug-hugging is for people who don't want their jugs to be seen. I prefer jug-grasping. Your point about gnomes not being alive is unanswerable - that's why the porcelain ones should be replaced by bearded men in costume. Time to gnome-up, mate. Deep down, you know you want to.

Gorilla Bananas: better me than an IKEA loveseat in your garden.

Kellie: it has a gimp mask and everything.

Well that's given my husband the perfect excuse not to dry the dishes....

The fly in the web: oh I don't know... they might enjoy a sensual wash and rub down.

Have you never watched Gnomeo and Juliet????

I was looking at places to visit when we are in Austria next month and came across a 'dwarf museum'. Was a bit surprised and then discovered it was a collection of 1000 gnomes. Must be a sanctuary for those who narrowly escaped Ikea's clutches.

Nota Bene: I've a feeling it would make me pro-IKEA.

Trish: hopefully there's a liberation movement being organised somewhere too. Power to the (little) people!

Löst Jimmy: I would but it 'urts me plates of meat...