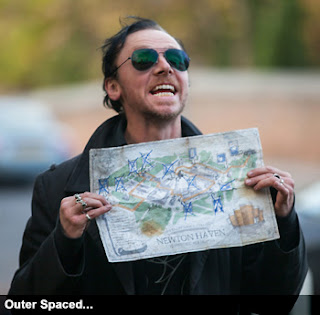 Before I proceed with my review of The World's End can I just say how gutted I was?

I seem to recall something similar happening with Wright-Pegg-Frost's last cinematic outing.

Picture the scene: opening night on screen 1 at out local Apollo (i.e. the big screen) and, including the wife and I, there were only about 15 people in the audience.

Now, some of you - those not initiated into the world's of "Spaced", "Shaun Of The Dead", "Hot Fuzz" or "Paul" - may think that is an eloquent and succinct film review.

But you would be wrong.

Because numbers can and do lie (just speak to any politician).

I know the weather is crazy at the moment. I know it's too hot and sticky to contemplate sitting in a cinema with crap air-con for a couple of hours to watch a film which doesn't feature some American beefcake hero-thug saving the world by destroying it single-handed and getting his end away with an attractively buoyant supporting (and well supported) actress. But even so. Come on, guys! These are our boys! Our boys doing good.

I'm gutted on behalf of The World's End team because I thought the movie was superb. It was the most polished, accomplished and adept film the trio of Wright-Pegg-Frost have produced to date. Sure it's a slow burner; time is spent building the premise, time is spent establishing relationships but as soon as the weird shit hits the fan the film takes off like a cornetto powered rocket.

For all the trademark humour that we expect from this team I was impressed with the amount of pathos the story has; how real the relationships and interactions between the character were. They genuinely caught something about our culture that we can all identify with and relate to.

Pegg's Gary King is truly comic-tragic character. Not just the school loudmouth who never grew up; he's a scared little boy who is unable to let himself grow up - and this is the source of most of the film's humour and pathos. We can all relate to not wanting to let go of the past; with deifying good times in our teens so much so that the rest of our lives seem empty and unbearable by comparison but Gary King takes it to self destructive extremes.

Frost adds depth to the personality interplay as Gary's former best mate, Andrew Knightley, who seethes with unexpressed disappointment at Gary's inability to grow up. The true scope and nature of that disappointment is revealed later in the film and spins nicely against the glib banter that constantly sparks between the two up to that point. But it is Gary's backstory, that isn't revealed until the very end of the film, that suddenly places all of his desperate need to cocoon and relive his teenage years into poignant sharp focus.

Without wanting to spoil the ending too much there is a fantastic moment when a superior alien intelligence is basically seen off by a couple of lairy-mouthed drunks. Somehow that very rang very true to me. I think if alien life did one day descend on planet earth some drunk with a bottle of Diamond White would probably dropkick it back into its flying saucer and tell it to fuck off back to Pluto. This would be both our first and last alien contact.

The World's End is a brilliant film and a fitting finale to the Cornetto Trilogy. Don't be one of those idiots who shrugged at "Paul" when it had its cinematic release but then caught it on DVD month's later and finally raved about it. Go and see The World's End now, rave about it now and support Team UK now.

The world could end tomorrow. Life is too short to wait for DVDs.

John: if you enjoyed Hot Fuzz, you'll "get" and enjoy The World's End.

I know that I'll love it and I have read only decent reviews. Thanks for the review.

Craig: it's probably their most mature film to date - which might put a few people off - but I loved it.

Loved "Hot Fuzz": We do these oblique films so well.

Marginalia: yes indeed; just heard about Mel Smith - via Twitter rather than the news. A sign of the times.

I'm hoping to see it very soon... and I WON'T be moaning if there's only 15 people in the audience.

Rol: funnily enough, as far as the wife and I were concerned, it made for a lovely disturbance free viewing of the film... but it would be nice if the film was also a commercial success as well!

It's very difficult for a British film to find a mass audience unless there's buggery in it (or sometimes the threat of buggery will do). Having said that, 'Hot Fuzz' was OK. What's wrong with buying the DVD? Not everyone has a cinema on their doorstep.

Gorilla Bananas: if you can drive / bike / walk to a Blockbuster you can get to a cinema. As for British films not reaching a mass audience unless it features buggery - what about The King's Speech? Oh. Actually, that's probably a bad example. The Royal Family = buggery per se.

Unfortunately I will have to wait for it to come out on DVD, unless I want to sit through a Catalan dubbed version of the film, which I feel may somewhat be lost in translation.

However, it is a bit sad that the release just so happens when there is a massive blumming heatwave. Hopefully the film will gather momentum, particularly with lots of good reviews such as this and people will go and see it.

Very Bored in Catalunya: you have a point. I'm really not sure the film will work dubbed in Catalan...!