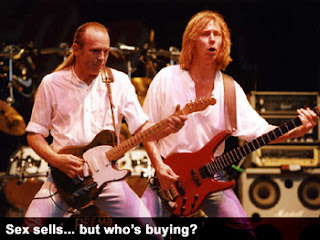 So the Co-operative has issued an ultimatum to the UK’s lad’s mag publishers: cover up or push off.

Basically, the publishers of such literary gems as Nuts, Loaded and Zoo have until 9th September to start issuing their journals in “modesty bags” or risk a firm refusal from the Co-op chain to even stock the publications on its 4,000 shelves.

While part of me is smirking at the thought of the busty models on the cover of Loaded being forced into an opaque polythene chastity belt I can see that this is a complicated issue (unlike the content of the issues at the centre of the conflict).

I don’t think anyone would disagree that the sheer amount of virtual female flesh that is currently on display around the Western world is deeply disturbing in its volume. Bus shelters, newsagents, internet, calendars, television and computer games all over our technologically advanced hemisphere are awash with tanned cleavage and airbrushed thigh.

Time was when I was a kid you’d have to strain your neck up to the top shelf of a newsagent to see an exposed naval or the slightest hint of pokie action. Nowadays you have to shift aside glossy images of buoyantly racked soap stars and pop singers exercising their diaphragms by sitting legs akimbo just to get your hands on the latest CBeebies magazine for your children.

Now I am not a prude. I’m a normal, sexually dynamic bloke. If I see a picture of an attractive woman (doesn’t have to be a supermodel – in fact, personally, I have leanings towards the real woman end of the spectrum) I’m going to have the expected response.

It’s a no-brainer that to commodify women and use them to sell product is morally, sexually and intellectually wrong. It’s actually worse when the product that is being sold is sex itself. There’s a weird kind of slavery ethos at work at that point that is worse because it is so insidious. Everyone is compromised by it. Everyone is cheapened.

I really don’t want my boys growing up in a world where one half of the human race is seen merely as a mass marketing tool and the other responds unthinkingly like the tools they undoubtedly are.

And yet I look at some of my blog posts – the last one is a good example – and it is plain that I’m not beyond throwing up a picture of an attractive actress to draw attention to my blog. Sure I don’t take the pictures and I don’t ask the models in question to pose so provocatively but I still use them to attract readers to my blog, to boost my stats.

I’m guilty as charged, milord. I guess it’s a good job my blog isn’t published as a glossy magazine because maybe it would be in a brown paper bag under the counter at the Co-op along with Zoo. Though I would hope that the articles contained inside mine would be a darn sight more thought provoking.

The issue at the heart of the problem is sex education. It hasn’t kept up with the march of progress. The hearts and minds of the young are ceaselessly influenced by the online world. And that world is, to quote shadow health minister Diane Abbott, completely pornified and the pornification has spread out into the real world too. This totally skews the attitudes of the younger generation towards sex, to each other and to themselves. Kids these days have far easier access to hardcore pornography than my generation ever did. Too easy access in my opinion. And it is barely regulated meaning that there’s a lot of nasty stuff out there being passed off as “the norm”. That is highly dangerous to an impressionable mind.

Sex education needs to catch up with this technological boom, catch on to what is happening and redress the balance. Because what is missing from this huge deluge of objectification and sex marketing is emotional content and emotional context – the most important aspect of any kind of sexual relationship. Without it objectification is inevitable.

With it the only thing that is inevitable is a just and righteous sense of outrage.

We need to teach people to re-engage with their hearts and minds – not just their genitals.

At best, chastity belts and modesty bags just sidestep the issue and make the whole topic even more fetishized. At worse they collude and allow the status quo to continue.

And surely nobody but nobody wants the Quo to continue?

I can't help but feel responsible for this post due to my comments on your previous offering. I have covered my shame in a grey plastic bag.

I feel very strongly about this because of the magazine 'incident' I mention in http://www.aguidinglife.co.uk/2013/07/the-doorway-to-porn.html I don't want to see it. I would mind less if they weren't airbrushed stretched falsehoods making my normal daughter believe she is fat.

K Ville: good point. I'm sure the rise of body dysmorphic disorder is caused by this relentless marketing of a mostly unobtainable and complete false ideal.

What good will sex education do if boys don't wank with emotion? Objectification begins with the hand. That's why every school needs an attractive English mistress for boys to fall in love with and fantasize about when they're wrestling with the bald-headed champ. Did you fantasize about matron? Don't feel bad about it.

Gorilla Bananas: I wish you'd been my school Principal when I was at school.

How soon is too soon for sex education though? It does seem that we're sexualising children now as soon as they are off the breast.
I rather enjoyed stumbling through it all blind as a bat. Way before the Internet could be the source of all knowledge of course.

Strange as it may seem I love a cleavage.... But a glimpse of a bra strap is all too much

Craig: how soon are kids exposed to sexual imagery? Hard to gauge these days but if there is a point where we consider it too young then we definitely need to be toning down the sexual hard sell that is all around us.

John: I agree! Down with bra straps!

"Just getting the CBeebies mag for my kids" as you wade thro' "Naturism for All" and "Naked Body Building."

Your frequent use of "tool" is somewhat disturbing.

Thank Gawd I only go for the knitting and crochet shelves these days!!Although 'Bunkered' sometimes has some nice shots of high,tight and pert bottoms in tartan trews which I find delectable!(did I really say that out loud?)

Marginalia: I take it you're not a big fan of DIY?

Nana Go-Go: Bunkered? Is that a golf magazine or some kind of WWII pastiche?

Sometimes I wonder whether kids even notice these days - they're so used to the images on newspapers, TV, billboards, the internet. But that's half the problem. It's being normalised.

Fran: yes, even if they don't know any different they are still being shaped and moulded by what's around them... and I suspect a lot of the impact on them is negative.

In light of the topic, surely the term 'modesty bags' is an oxymoron?

Amanda: very true. It should be called an indecency shield.

That's really interesting.. I think you realised something halfway through this post! Modesty bags just sounds wrong. Granted, not half as wrong as the publications they'll be used for.

Being Me: I did realize something - the threat of Status Quo is bigger than I first feared... ;-)

You should see some of the photos in my husband's medical magazines. I wish they arrived in the post in an opaque cover.

Trish: I'm guessing they're not the kind of full frontals that usually whet a man's appetite?

Personally I think that womens' magazines like Pick Me Up with their lurid headlines of 'Raped by My Own Brother' are equally degenerate and should be banned if Nuts is. What sort of toxic effect do most womens' magazines have on their self-esteem? To have publications telling you you are too fat, not as pretty as whatever Hollywood star and you are invalid after 35 without a facelift (unless it's People's Friend) is pretty abusive if you ask me.

Laura: I quite agree. I can suddenly see a good business opportunity in the offing - designing modesty bags for popular magazines...