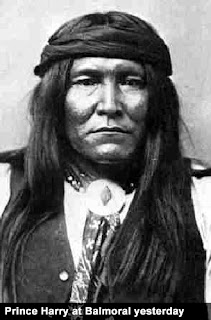 The great thing about the modern world and social networking is that news can be delivered instantaneously in sound-bite form so that it is quickly and immediately digestible. I no longer need to wade through hours and hours of news channels or column inches of newsprint to get the gist of what is going down out there in the big wide world.

Some news today has had me smiling wryly and inflating with slightly irreverent pride for the latest achievement of one member of our Royal Family.

It seems that Prince Harry has qualified to become an Apache Commander.

I'm assuming that sometime over the last year he befriended a descendent of Cochise - maybe saved his life in a bizarre bingo accident on a reservation somewhere in America's mid-west - and that the relationship developed to that slightly awkward point where it was necessary for them both to nick the palms of their hands with a sharp knife and rub the wounds together so that they became blood brothers.

I guess after that it was just a small leap of ideology to thoughts of uniting all of America's scattered  Native American tribes. How Prince Harry managed to fit that into his Las Vegas itinerary without the world finding out, I don't know, but clearly the ginger Prince conceals many hidden abilities and skills the like of which his brother can only dream of. And by brother I mean, William, not his new brother Cochise who by now must surely be aware that Harry has heap strong medicine.

Once the First Nations were again re-established and as one behind their new leader, He Whose Hair Dances With Fire, the next step was quite naturally declaring war on the white European usurpers and taking back the lands and buffalo that they had stolen from their ancestors. I'm assuming that at this point traditional ties with Prince Harry's Germano-British family back home in the UK may have become strained unless Prince Charles has developed a sudden yen to sell Ye Olde Duchy Buffalo Mozzarella but Harry is plainly a man who likes to push his envelope out as far as it will go. And after all, blood is thicker than the monarchy especially when your palm is itching like buggery.

In the absence of John Wayne to act as an honourable counterpoint to the glory-hungry appetites of the US I fear this latest career move by the young Prince can only lead to bloody conflict and strife. The war on terror may have to take a backseat and bingo may have to be outlawed. It is unknown at this point whether Johnny Depp has abandoned his moderately successful movie career and his frequent on-screen liaisons with Helena Bonham-Carter to honour his Native American heritage and join the confederacy of First American tribes in their fight for emancipation under the gingery auspices of He Whose Hair Dances With Fire but it is certain that most of the cast members of Last Of The Mohicans are already paid-up blood brothers.

The tomahawk of war has been thrown, Obama. Or to paraphrase Shakespeare: the bow has been bent and drawn. It is time to make from the shaft of the ginger Prince.

The Indians may have second thoughts when they realise Harry's cognomen among the white tribe is He Who Gets Naked With Bimbo. I don't think Obama has anything to worry about, though, because I doubt Harry will be firing live ammo. And the Tomahawk is a cruise missile, so he won't have his finger on that button.

Gorilla Bananas: true. And I'm sure Harry gives the bimbos the full benefit of his forked tongue... another fact that won't go down well with the First Nation but may well encourage a sense of brotherhood with the US politicians.

That picture of Prince Harry at Balmoral yesterday looks suspiciously like Fatima Whitbread to me.

I wouldn't have minded seeing Little Big Horn Harry taking on John Wayne...but thwarted of that I'd be glad to see anyone take on that filth Obama.

The fly in the web: forget John Wayne; Clint Eastwood is your man.

I was rather hoping for more of the sleazy Las Vegas strip tease. But if he wants to flaunt his chopper, who am I to complain. Now he can pilot it too...

Craig: I suspect Harry doesn't have to fly his chopper solo very often but has a wingman to do most of the hard work for him.

Did I miss a chopper?

John: the Prince has a passion for strip billiards... I believe he sometimes conceals things behind the cue.

I don't understand the references in this Steve....all this talk of choppers and the like.....but it has got me thinking about what Native american names we could all have?.mmmm..nice new blog look too.

Libby: essentially the "chopper" is the throbbing engine that drives Prince Harry on a very fundamental level.

His grandmother is less than impressed...she thought he would be a chieftan

He will probably be given an important role in the Royal Smoke Signals now.